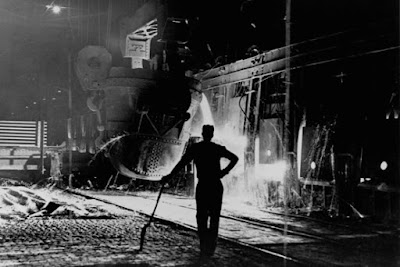 "Americans developed production methods that were both highly productive and often very dangerous … Accidents Were 'Cheap.'" Source"The steel industry produced some of the most violent accidents … Streams of hot metal poured down on the workmen, engulfing and literally cooking some of them … The explosion shook buildings in the town and caused panic among the populace. Thousands turned out to watch the huge fire that ensued … Two employees at a steel plant in Youngstown, Ohio were sent to clean out the dust underneath the blast furnaces. Suddenly there was a slippage of tons of molten fuel and ore inside the furnace, causing large amounts of very hot dust to fall on them. One of the men was completely buried in it and died in great agony." Source Dushan was a middle-aged male. His mother was a Croatian immigrant. His Croatian grandfather, like many Bohunk immigrant workers, worked in a mill, and died young. After her father's death, Dushan's destitute mother sang Croatian folksongs in a bar for nickels. Dushan's father was a poor tenant farmer, but a WASP, and a step up for a Croatian immigrant. His family hailed from the Midwest. Why did your family come to America? In Croatia, "My uncles would be overrun by enemies, who'd grab them, give them guns and uniforms, and tell them to fight. Then the other enemy would advance and say, 'Okay, the other side already gave you your guns and uniforms, now you can fight for us, or we'll shoot you. You're really pretty nice guys. We don't want to shoot you.' So, they'd say, 'Looks like you guys feed pretty well. We'll fight for you.'" Emigrating, they traveled "third class," "It was inconvenient and they were rudely treated" at Ellis Island. "They were the kind of people who would sacrifice a lot. They would play under anybody's rules. They'd rationalize: 'These people must have good reasons for putting us through this hell.'"Like many Bohunk industrial laborers, Dushan's grandfather died young. On paydays, Dushan's mother would sing "I'm a Little Orphan Girl," a Croatian folksong, at a bar called "Janko's Four Deuces." Men would toss nickels and she would buy potato chips to ease her hunger. Dushan's grandmother would attempt to buy throwaways from the butcher, who would give them to her for free. His mother and aunts had to quit school and go to work; at the factory they would slow work down in order that their quotas not be raised. Eventually Dushan's mother married a WASP, and, "You only need to look at the wedding photos to see the extreme distaste on my [WASP grandmother's] face."Dushan said, "My dad [a tenant farmer] couldn't even afford glasses. I am extremely attracted to the idea of populism. Power to those lower on the scale...It's a Croat thing. I stand up for the rights of the little guy. I heard from my uncles and aunts about how they felt being ruled by strangers: Austrians, Turks, Russians. 'Just another asshole coming in to make our lives miserable'... " Dushan invokes narratives of his grandfather helping out fellow mill workers, African Americans, as an example of this. I asked Dushan how he feels when people tell him he's enjoyed white privilege. "I laugh. Sometimes I confront them. 'Oh, give me a break.' I argue with fools to taunt them." Dushan enthusiastically spoke of the positive side of the Croatian culture he inherited, including sharing a recipe for Croatian tomato wine. Dushan has children. Will they carry on with the Croatian customs Dushan values? "I would love it if my kids carried on. Will it happen? Naw." ***"To Chew Someone Down" Bieganski Interview #1"Poles are Inherently Comic Janitors" Bieganski Interview # 2 "My Father Began to Conceal His Jewish Origins" Bieganski Interview # 3They Worked Like Moles Their Whole Lives Bieganski Interview # 4 "She Never, and I Mean Never, Threw Anything Away" Bieganski Interview # 5"They Always Kept One Token Jew" Bieganski Interview # 6
Posted by D Goska at 5:30 PM