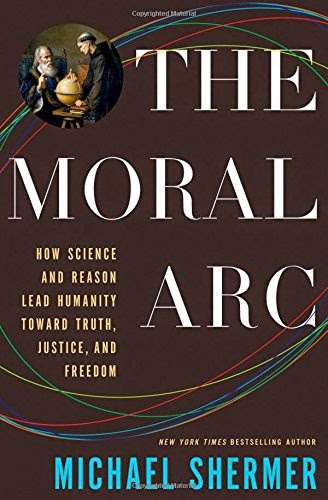 You can also read the full text of the review, below.


Michael Shermer's 2015 book, The Moral Arc: How Science and Reason Lead Humanity Toward Truth, Justice, and Freedom, announces a messianic vision: humanity is naturally evolving into a superior version, one that will be more moral and less religious. He writes,


As a species, we are becoming increasingly moral…we are living in the most moral period in our species' history…we evolved the capacity to actually be moral animals (3-4; 361).

One of Shermer’s main themes is that formal education and literacy may make people more moral (28-9).

In this review, the phrase "human progress" will refer to this idea: that humanity is evolving in linear time from the past to the future into a more moral, less religious, more atheistic form; that religion is a negative force and a relic of the ignorant past; and that a combination of natural forces and formal education are effecting this improvement in the human species.

"With Blood and Scars" by B. E. Andre. Book Review by Michal Karski 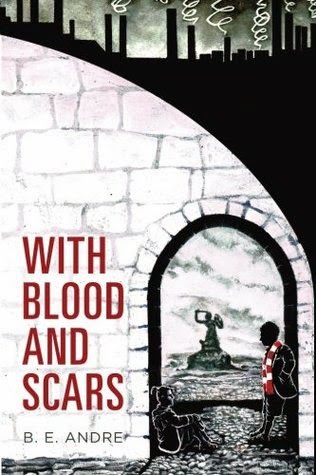 "With Blood and Scars" by B.E. Andre

"What did you do in the war, Daddy?" was a question which became a bit of a cliché back in the fifties and sixties. The answers came in many and various forms at the time. Those of us living in English-speaking countries might suppose that individual stories from the various campaigns of the Allies during World War Two have all been told and that the subject is quite familiar territory by now. Even so each new decade provides new viewpoints. The ever-changing focus of history ensures that each succeeding generation will feel compelled to continue asking the same question and to reassess the conduct of their fathers and mothers, or, indeed, their grandfathers and grandmothers. As we have seen recently, the Germans continue to examine the conduct of their forefathers to this day. But a frequently overlooked aspect of the entire subject is, of course, that there are Allied war stories which are hardly known in the West. The world of the Polish Allies who found themselves in Britain after the war is the background against which B.E. Andre sets her story.

For ten-year old Ania Walewska, a girl growing up in "Polska Land", the Polish community in Manchester of the mid-sixties, and who is at the heart of this engaging first novel, the question of what anyone did during World War Two is profoundly uninteresting. In fact, anything to do with those times, particularly as recounted by Ania's redoubtable grandmother, who is full of ghastly tales of Siberia, is virtually incomprehensible to the girl and makes her mentally switch off. As for whatever her father may or may not have done in the war years, all she knows is that talking about those times makes him angry and upset.

Ania just wants to be out with her friends. She is a natural rebel, oppressed by the influence and the rigid rules of Polish expat life, whether she finds herself stuck at home decorating Easter eggs in the Polish style or bored during the interminable church services or sitting through extra Polish lessons which are also as boring as they are irritating and unnecessary. The term 'expat' in this context might be substituted by 'political refugee' to describe those Manchester Poles among whom this story is set. It's difficult to call these people simply immigrants because they are from that generation of Poles who found themselves in the UK and other Western countries as a direct result of the war and through no choice of their own. They are mostly ex-combatants from either the Allied army abroad or from the resistance at home who ended up in German prison camps, and have chosen to stay abroad rather than to return to communist Poland.

As the novel unfolds, we see that many of this older generation, have adapted themselves to their new home with reasonable success. Witek, Ania's father, is a keen Manchester United supporter, for instance, and enjoys Hollywood musicals and the Marx Brothers on TV while Wanda, her mother, loses herself in romantic fiction. But parents and grandparents feel duty bound to pass on their Polish heritage to the youngsters. However British they may be outwardly, they are in their hearts first and foremost Polish patriots and they expect their children to feel the same. Ania mostly tries to please because she is very much bound up with her family. Her father, in particular, is the dominating and sometimes tyrannical presence whose varying and unpredictable moods shape her days. When he has had a drink or two with his ex-combatant friends, he can be positively frightening. Ania goes along with his requests, when, for example, she is asked to learn to recite a patriotic Polish poem in order to impress relatives from Poland. But she can't wait to get out of the house and play with her friends – who are also from immigrant and foreign backgrounds – and be a relatively normal Mancunian child. The central part of the story is what the group of young friends get up to out of sight of the grown-ups and which has consequences resonating down the years.

An older Ania also narrates from a viewpoint in the present. The paterfamilias who used to dominate Ania and her siblings' lives is now a terminally ill old man and Ania, by now a mother of two grown-up children and having had to deal with some serious health problems of her own, has to put her life on hold while she faces up to the inevitable. But there is also something very important she needs to do. She needs to find out something which has been troubling her ever since her childhood. She has never understood properly what her father went through in the war. There have only been vague hints and over the years she has wondered exactly what sort of a man her father was in those dark days in Warsaw. Old Witek may have been just a teenager in the Polish resistance when the Germans stormed the city during the uprising in 1944, but Ania knows he feels remorse at something that happened then. What did he do in the war? Ania needs to confront her father and solve this mystery before it is too late.

B.E. Andre has crafted a very readable debut novel and the deceptively straightforward style displays a narrative flair and a particularly keen sense of dialogue. I could easily imagine this book adapted for television, for instance, particularly as the group of childhood friends reflects the various nationalities which were as much in evidence in sixties Britain as they are today. The device of the dual plotline is never obtrusive and the pace is brisk with frequent touches of humour in what is essentially a study of some quite weighty and thought-provoking themes. Indeed it would be difficult not to be reminded of Wajda's "Kanał" or Agnieszka Holland's "In Darkness" in one particular sequence.

The voice of the child narrator is convincing: she is not exactly a much younger, female version of Holden Caulfield – since there is not quite the same overwhelming sense of alienation – but she is given a similar kind of critical and amused detachment from the events she describes, even though she is deeply involved. And although the Manchester setting provides a rather unexpected background for a story dealing with Polish themes, nevertheless anyone with any Polish connections will probably find something they recognize in this book – and no doubt Mancunians will do the same. Those readers new to "Polska Land", who only know the Poles because of one popular pope, or because of a moustachioed trade union leader, or through their local Polish delicatessen or perhaps because they have employed an efficient builder or plumber, may be surprised to learn about the post-war origins of the Polish presence in the UK. This novel is a good introduction to a community which is not so much separate or enclosed or somehow exists in parallel to the mainstream English one but continues - in spite all the shared values and the interaction with ordinary British life – to have many of its own traditions and definitely has its fair share of idiosyncratic customs.

The author even provides a short glossary for anyone who wants to check up on the occasional Polish word thrown into the mix. This is a well-constructed first book and an altogether gripping read. Hopefully it will also be the prelude to many more from this talented writer.

"With Blood and Scars" is available at Amazon here.