"Promise My You'll Shoot Yourself: The Downfall of Ordinary Germans in 1945" When Utopias Fail 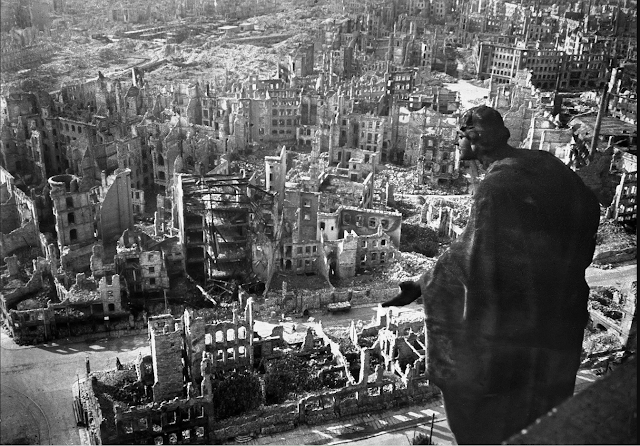 Promise Me You'll Shoot Yourself: The Downfall of Ordinary Germans in 1945

Promise Me You'll Shoot Yourself is one of the best books about Nazi Germany I've read. The author is 55-year-old Nuremberg native Florian Huber, who wrote his PhD on British policy regarding the postwar occupation of Germany. The book was first published in Germany in 2015. It became a bestseller. Penguin published an English translation in 2019. Huber's writing is as crisp and gripping as prize-winning fiction. His style is a bit like Hemingway's. The main text of the book is 267 pages, followed by 20 pages of notes. Promise Me is a quick read that covers an astounding amount of history. It opens with the mass suicides prompted by Nazi Germany's defeat. It goes on to describe why so many Germans felt that suicide was the only possible response to that defeat.

Promise Me is a giant red flag, warning anyone who dreams of Utopia, and the rapid social engineering demanded by Utopians, about the dangers of such a path. Utopian attempts to change society rapidly tend to end badly. Of course Nazi Germany ended badly for Nazism's tens of millions of victims. But it also ended badly for the allegedly superior Germans promised a thousand-year Reich. Those bad consequences included not only a crushing military defeat, rape on an epidemic scale, and the loss of territory to the Soviet Union, but also mass suicide. 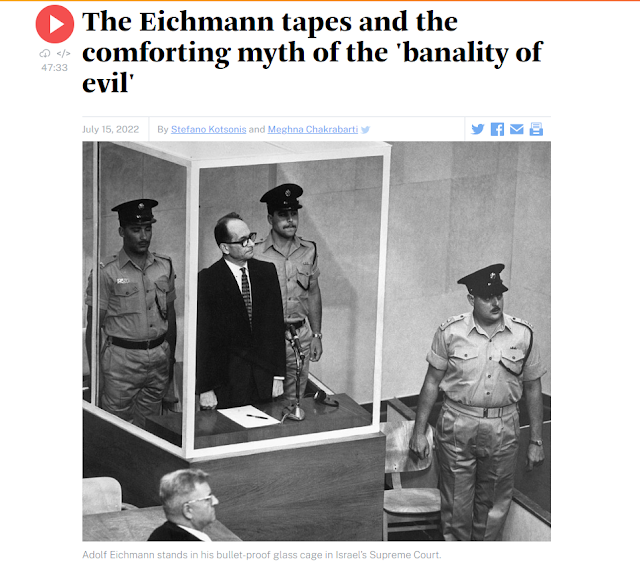 One of the more confounding and depressing facts of World War II is that after the war various forces conspired to protect notorious, known Nazis.

For example, there were the ratlines, operated, inter alia, by pro-Nazi Catholic priests. See here.

There was Operation Paperclip, a US government program to bring Nazis to the US so they could aid American military research and development. See here.

On July 15, 2022, the NPR program On Point interviewed the maker of the new film about Adolf Eichmann, "The Devil's Confession."

Host Meghna Chakrabarti says that in the film it is pointed out that during the Eichmann trial, Israel suppressed information about Nazis then living in West Germany in order not to chill relations with West Germany, and also suppressed the Eichmann tapes, because Israel was, at that time, developing a nuclear weapon.

Mozer says that Israel wanted money from West Germany to develop its nuclear program. West Gernany's condition was that Israel stop looking for Nazis even though, Mozer says, "West Germany was filled with them and they were still in powerful positions ... They didn't want more trials. They didn't want more names to be mentioned in the Eichmann trial."

Mozer says he does not criticize David Gen Gurion's actions on this matter because Ben Gurion did what he had to do to secure Israel's future.

Link to the show 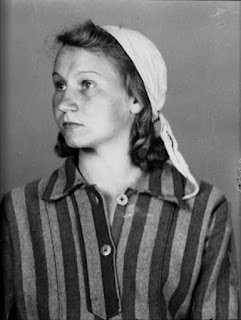 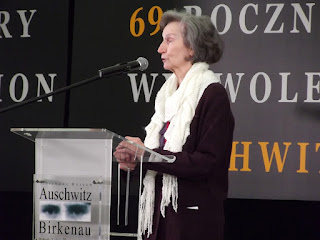 From her New York Times obit
"Her writing career began when she was hired as a newspaper reporter and editor. She didn’t seek a byline for her first article, an account of the war crimes trials in Nuremberg, Germany. Instead, she signed off with her identification number at Auschwitz: 7566."
While on assignment in Paris in 1959, she walked in the Place de la Concorde among tourists, many of them speaking German.
“Suddenly, someone appeared behind me,” she recalled long afterward on “Stories From the Eastern West,” a Polish podcast. “It was the voice of my overseer. All this time she’s been living a peaceful life in Paris.” She quickly realized that the woman was not, in fact, her former guard at Auschwitz, but that moment “just wouldn’t leave me alone,” she recalled.
It spawned her best-known work, “The Passenger in Cabin 45,” later titled “The Passenger.” It was released as a radio play in 1959, a novel published in 1962 that was translated into 15 languages, a motion picture, in which she collaborated on the script with the director, Andrzej Munk, and an opera.
The opera was composed by the Polish-born Mieczyslaw Weinberg, who was Jewish and had lost his parents and a sister in the Holocaust, while the libretto was written by Alexander Medvedev, a Russian. It was conceived in the Soviet Union and completed in 1968; the Russian composer Dmitri Shostakovich praised the opera, but it was banned by the Soviets.
A listing of Ms. Posmysz’s survivors was not immediately available. She was married. Her father was shot and killed by Germans during the war ...

Zofia Posmysz-Piasecka[1] (née Posmysz; 23 August 1923 – 8 August 2022) was a Polish journalist, novelist, and author. She was a resistance fighter in World War II and survived imprisonment at the Auschwitz and Ravensbrück concentration camps. Her autobiographical account of the Holocaust in occupied Poland, Passenger from Cabin 45, became the basis for her 1962 novel Passenger, subsequently translated into 15 languages.[2] The original radio drama was adapted for an award-winning feature film, while the novel was adapted into an opera of the same name with music by Mieczysław Weinberg.[3]

Posmysz was born in Kraków[4] and lived there until the invasion of Poland in 1939.[2] During the occupation she attended clandestine courses and worked at a cable factory. She was arrested by the Gestapo in 1942, at age 19,[4] charged with distributing anti-Nazi leaflets. She was kept for six weeks at the Montelupich Prison in Kraków.[2] After prolonged interrogation she was moved under escort to the Auschwitz-Birkenau concentration camp.[5] Relegated to arduous work at a penal company in Budy, she was saved twice by the camp doctor, Janusz Mąkowski. On 18 January 1945 Posmysz (prisoner number 7566) was sent to Ravensbrück concentration camp and from there to the Neustadt-Glewe satellite camp, where she was liberated on 2 May 1945 by the US Army

After World War II, she studied at the University of Warsaw, and worked for the broadcaster Polskie Radio in the culture section.[6] In 1959, she wrote a radio drama, Pasażerka z kabiny 45 (Passenger from Cabin 45), based on her memories from the time spent in Nazi concentration camps.[4] The play was produced in the same year by the Polish Radio[7] featuring Aleksandra Śląska and Jan Świderski. It was adapted for television by Posmysz in 1960. The show was directed by Andrzej Munk and featured Ryszarda Hanin, Zofia Mrozowska, and Edward Dziewoński in the leading roles. The Passenger from Cabin 45 was innovative and unusual in the genre of Holocaust literature, because it depicted a loyal SS Aufseherin, Annelise Franz, in charge of Posmysz's work detail at Auschwitz,[8][9] who nevertheless exhibited basic human behaviour towards prisoners.[2]

The screenplay for the film was written by both Posmysz and Munk in 1961.[3] Munk died in a car crash soon thereafter.[10] Posmysz did not participate in the making of the film, which was released in 1963.[3] Instead, she focused on writing a novel derived from her autobiographical memory.[4] The book was published in 1962 as Pasażerka.[2] The events in the book take place on an ocean liner, 16 years after the war ended. The former SS Aufseherin, Lisa Kretschmer, travels with her husband in search of a new life. Among the many passengers, she spots Marta, her former inmate, whom she used to feed and protect from dangerous labour. While at Auschwitz, Lisa was assigned to a new post of duty, and offered Marta to take her from the camp to detention in a less dangerous place, but to no avail. In the end of the novel, she learns that Marta recognized her also.[3] Notably, in the original radio drama, the titular 'Cabin 45' was Posmysz's compartment number on a train to Auschwitz; an ocean-travel served as literary device of story within a story.[5] No English translation of The Passenger novel exists.[11]

When Pope Benedict XVI visited the memorial for Auschwitz in 2006, she was among the surviving inmates greeting him.[4] In 2015, Posmysz was among 19 Auschwitz survivors reporting for a documentary by Der Spiegel titled The Last Witnesses (Die letzten Zeugen).[12]

Posmysz went on writing continuously for over 30 years and wrote her last published book at the age of 73. She is best known for her 1959 autobiography Passenger in Cabin 45 (Pasażerka z kabiny 45) which led to a television play and film The Passenger by Andrzej Munk, who was one of the most influential artists of the post-Stalinist Poland.[7] The director died during the screening in 1961, but the film was completed by his assistants, directors Andrzej Brzozowski and Witold Lesiewicz,[1] and first released in 1963.[3] The novel by Posmysz became the basis of the libretto by Alexander Medvedev for Mieczysław Weinberg's 1968 opera The Passenger, Op. 97. Suppressed for more than 40 years, it was first staged at Bregenz Festival on 21 July 2010, followed by the same production at the Grand Theatre in Warsaw.[15][16] The opera by Weinberg premièred at the Lyric Opera of Chicago on 24 February 2015,[17] with soprano Amanda Majeski as Marta.[18] Die Passagierin [19] was staged by the Frankfurt Opera in March 2015 with Leo Hussain conducting.[20]

Thank you to Jerzy for commemorating Zofia Posmysz

Frank Oz and a Hitler Puppet 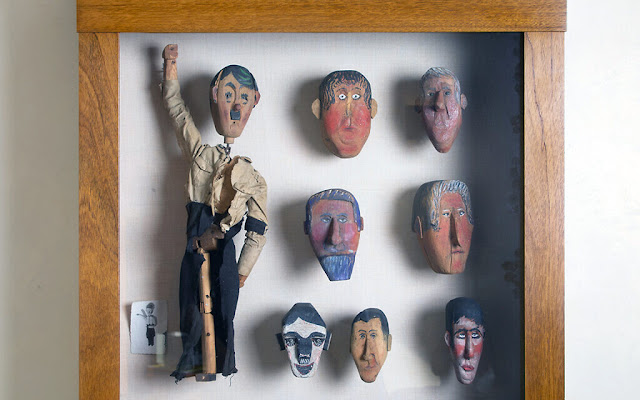 Puppeteer Frank Oz and his connection to the above photographed Hitler puppet. See here

The Atlantic Attacks the Rosary. A Catholic Who Prays the Rosary Daily Responds

The Atlantic, a prominent American publication, published an attack on the rosary. I respond here

I'd not heard of Andrew Torba till just now. I was watching a Stephen Colbert monologue on YouTube and Colbert mentioned Andrew Torba. My ears perked up for a couple of reasons. "Torba" is a Polish word meaning "bag." And Colbert said that Torba is a Christian nationalist and an anti-Semite.

I don't know how much power Torba has.

The article about Andrew Torba is here

Below is his statement, as featured in the Media Matters article. Torba singles out Jews as a problem and pretends that all Christians are like him. I am a Christian and I have nothing in common with a man who speaks like this. I hope any increased visibility brings with it increased condemnation of so-called "Christian nationalism" and all anti-Semitism.

We have officials not only at the state level, not only at the federal level, but also at the local level. People who are running for school boards — Christian nationalists who are running for school board and by Christian nationalists, I mean like concerned Christian parents who are done, who are done, done with this, done, done being controlled and being told what we're allowed to do in our own country by a 2% minority or by people who hate our biblical worldview, hate our Christ, hate our Lord and savior. Done. It's over. So you better deal with it.

You can — you can demonize me individually. You can try and attack me. But guess what? You know, I am just one of hundreds of millions of Christians in this country, bud. So guess what? It's inevitable. Sorry.