Bieganski the Blog: Against Identifying Nazism with Christianity

Bieganski the Blog: Against Identifying Nazism with Christianity: On January 4, 2017, news broke that four young Chicagoans kidnapped an 18-year-old, special needs teenager. The kidnappers bound and gag...
Posted by D Goska at 11:20 AM 5 comments:

"Some visitors to the Buchenwald Nazi concentration camp - now a memorial - have gone for sledge rides over mass graves and such abuses must stop, the site's managers have warned.

The site extends across a large wooded area in eastern Germany, as Buchenwald had several sub-camps.

"Cases of winter sports near mass graves, disturbing the peace of the dead, will be reported," the memorial warns on its website.

They were mainly Jews, Sinti and Roma, resistance activists, homosexuals and Soviet soldiers. They were beaten, starved and tortured. Some were used for medical experiments.

The site has a huge cemetery on the south slope of Ettersberg hill, with a belltower at the top - the area now popular for winter excursions.

Rikola-Gunnar Lüttgenau, a historian at Buchenwald, told the BBC that sports activities were already banned at the site, yet "last weekend it was used heavily, many sledge tracks were found on the graves, and the car park was full".

"Now because of the pandemic winter sports facilities are closed in Thuringia [region], so they are using the memorial," he added.

Disturbing the peace of the dead is an offence punishable by a fine in Germany, he said, adding that the memorial has now stepped up its security.

"Unfortunately more and more people have been disrespecting the place, horse-riding or riding motorbikes in the woods.""

Homophobia in Poland has harmed Poland's international reputation. In September, 2020, fifty ambassadors released an open letter begging Poland's government to respect the human rights of all of its citizens. It is a sad day when other countries must lecture the Polish government about human rights.
The letter is below.
This letter has been coordinated by the Embassy of the Kingdom of Belgium in Poland.
Although due to epidemiological circumstances the 2020 Warsaw Equality Parade could not take place at the foreseen date we express our support for the efforts to raise public awareness of issues affecting the lesbian, gay, bisexual, transgender and intersex (LGBTI) community and other communities in Poland facing similar challenges.
We also acknowledge similar efforts in Białystok, Bielsko–Biała, Częstochowa, Gniezno, Kalisz, Katowice, Kielce, Koszalin, Kraków, Lublin, Łódź, Nowy Sącz, Olsztyn, Opole, Płock, Poznań, Rzeszów, Szczecin, Tarnów, Toruń, Trójmiasto, Włocławek, Wrocław and Zielona Góra.
We affirm the inherent dignity of each individual as expressed in the Universal Declaration of Human Rights.
Respect for these fundamental rights, which are also enshrined in OSCE commitments and the obligations and standards of the Council of Europe and the European Union as communities of rights and values, obliges governments to protect all citizens from violence and discrimination and to ensure they enjoy equal opportunities.
To this end, and in particular to shield communities in need of protection from verbal and physical abuse and hate speech, we need to jointly work on an environment of non-discrimination, tolerance and mutual acceptance.
This includes in particular sectors such as education, health, social affairs, citizenship, public service and public documents.
We pay tribute to the hard work of LGBTI and other communities in Poland and around the world, as well as the work of all those who seek to ensure human rights for LGBTI and other persons belonging to communities facing similar challenges, and to end discrimination in particular on the basis of sexual orientation or gender identity.
Human rights are universal and everyone, including LGBTI persons, are entitled to their full enjoyment.
This is something that everyone should support.

"Two well-known Polish Holocaust historians are on trial for alleged defamation over their claim that the late mayor of a town near Warsaw who saved one Jewish woman was involved in the murder of 22 other Jews.

Jan Grabowski and Barbara Engelking were sued last year in civil court by a niece of the mayor for what they wrote about him in their 2018 book “Night Without an End,” about Polish collaboration. Their trial opened on January 12, the OKO news site reported Saturday."

Poles on Trial for Showing Christian Compassion to "The Least of These." (Matthew 25:40) 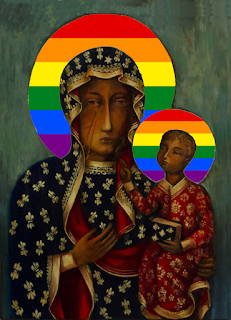 "For your freedom and ours!" Poles go on and on about how they love freedom, freedom for everyone, and how they have fought for freedom all over the earth. And yet in today's Poland, too many Poles want to oppress people for no other reason than their sexual orientation.

Curtis Urness, Are You Out There? "Stars and Crosses"

Curtis, if you see this, please email me. Or leave a comment. Thanks!

Since I'm trying to contact you, let me mention your book! 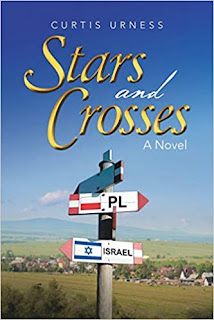 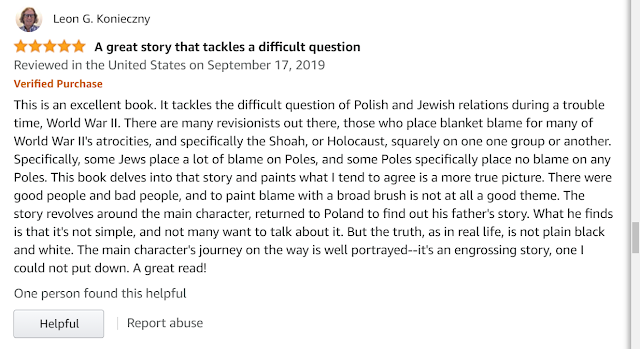