It is a difficult fact of history that there were devastating pogroms in Ukraine. Tens of thousands of Jews were murdered under horrific circumstances. Why? Again, long complicated history. "Read a book!" as my mother used to shout at me, usually while throwing a book -- a pertinent book -- at my head.

This is history. It is history we wish had never happened. But it did happen and we can't erase it.

But Jews in Israel MARCHED FOR UKRAINE.

Just as Poles, who also have a complicated history with Ukraine, are doing everything they can to help Ukraine -- humanitarian aid, military aid, love. 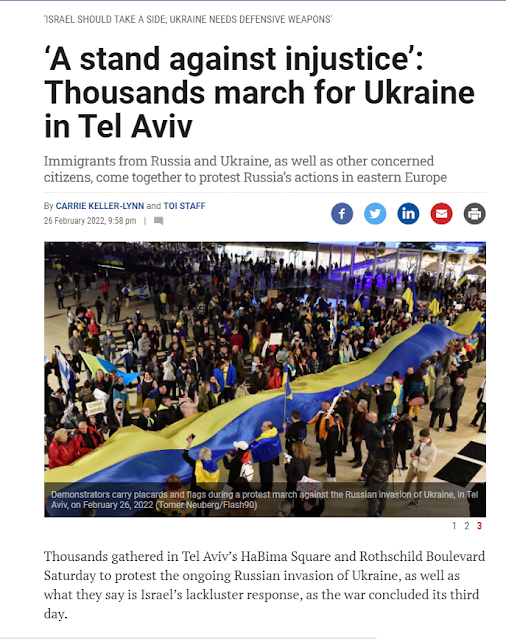 This blog is dedicated to "Bieganski: The Brute Polak Stereotype," and the difficult topic of Polish-Jewish relations.

One of the most frequently visited issues in Polish-Jewish relations is the question of whether or not Jews felt Polish.

It's a difficult topic that can't be adequately addressed in a short blog post. Read the book!

For now I can say this. I have a couple of lovely Jewish Facebook friends. They are great folks, good friends, and they contribute much to my life.

They say, paraphrase, "We are Jewish and only Jewish. We have nothing to do with Polish identity."

When I urge them to reconsider, if they respond at all, they say something like "Poles were rapists and pogromists and I want nothing to do with them."

No, this is not all Jewish people's attitude. But it is one I encounter in  day to day life and that I encountered when researching the book, as you can see from reading the book.

On the other hand, there were many Jews who felt loyal to Poland and who fought and risked their lives, or died to defend Poland. They were proud to be Polish. These people include historical heroes like Michal Landy, Roman Solecki, who fought in the Home Army and was dedicated to the Polish cause throughout his life in the US, and Jurek Leder, about whom I've written a few times on this blog.

I thought of  this question while watching Ukraine's president, Volodymyr Zelenskyy, speak. His passion for his homeland is obvious. 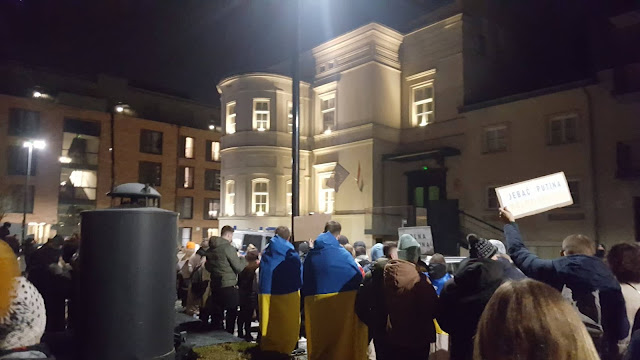 Poles in Krakow, Poland, wearing Ukrainian colors. They are in front of the Hungarian Consulate. Hungary -- along with Germany, Italy and Cyprus -- was one of the countries blocking the initial decision to cut Russia off of SWIFT. The demonstration started in front of the German consulate and then moved on to the Hungarian one.
This is remarkable. Again, bad things have happened between Poles and Ukrainians, most recently during the Nazi occupation. That these good Poles are keeping their eye on the ball -- focusing on the invasion rather than past history -- is commendable.
Posted by D Goska at 10:05 AM 1 comment:

We Salute the Ukrainian Heroes of Snake Island. For Your Freedom and Ours. 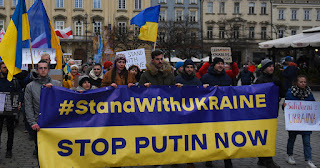 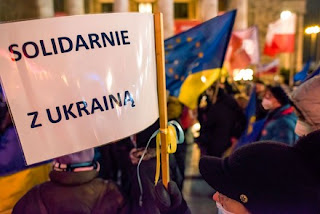 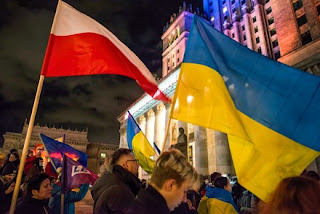 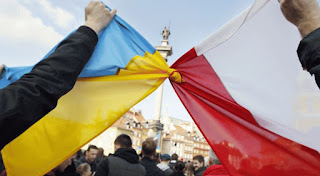 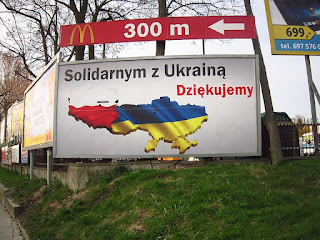 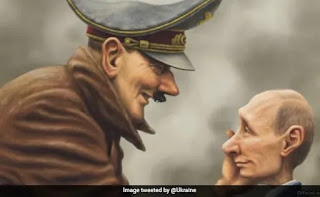 Bieganski the Brute Polak the Video 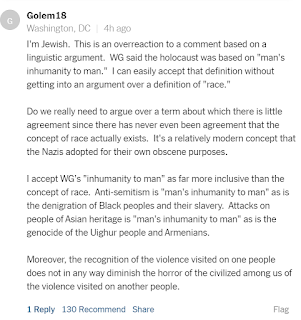 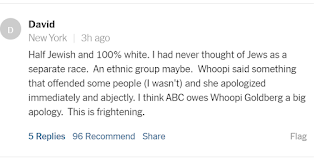 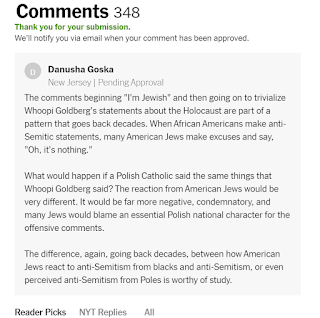 On Monday, January 31, Whoopi Goldberg, a beloved and Academy-Award-winning actress and public figure, said on a TV show called "The View" that the Nazi murder of six million Jews had nothing to do with race or racism, and that the Holocaust is just "This is white people doing it to white people so y'all go fight amongst yourselves."

"Y'all" is a term often used by blacks on social media in contemptuous statements about whites.

"The View" features a group of heavily made-up, minor celebrity women sitting around saying stupid things about current events. Their table is shaped like a sagging breast and the V in The View is emphasized to suggest the shape of female anatomy.

This is not the first time Goldberg has said something spectacularly stupid. She also defended Bill Cosby, serial rapist. Significantly, Cosby is black and many of his accusers were white.

Whoopi also defended Michael Vick, who tortured fighting dogs to death. She said that that behavior was "cultural" and so others could not judge him. Vick is black.

Whoopi's comments about the Holocaust are not random or isolated, in other words. They are part of a worldview. This worldview has come up before in Black-Jewish relations.

Please read the chapter on Black-Jewish relations in my book, "Bieganski." Events like this have happened again and again over the past sixty years.

Another example : Black students being ejected from a movie theater in Oakland, CA, when they laughed and made jokes during a showing of "Schindler's List."

African American identity, currently, is tightly enmeshed with the concept of suffering. "We suffered! We were slaves! Racism keeps us down! There is an epidemic of white cops shooting unarmed and innocent black men for no reason!"

When a concept of identity focuses so much on suffering, any other group that has suffered is a threat to identity. Blacks resent Jews for having suffered. Schindler's List is a comedy. The Holocaust had nothing to do with race.

"We are the victims. We suffer. Racism is the worst thing that ever happened. We are the sole victims of racism. We are the only people who have ever been enslaved. "

One of the most remarkable expressions of this worldview I ever heard was from a caller in to NPR. An NPR talk show was featuring a survivor of the Cambodian killing fields. The caller who identified as black said that being black in America today is worse than the Killing Fields of Cambodia, and the guest had nothing to say to him or her about suffering.

In addition to this use of suffering as a self-identifier, there is also the relativist "You can't judge me" stance. Whoopi defended Bill Cosby, a black serial rapist ,often of white women (although Cosby raped black women as well). Whoopi defended Michael Vick, a know torturer of defenseless dogs.

And one more thing. Whoopi's comment reflects a culture-wide ignorance about what racism is. Again, the American focus is on slavery, as if the US is the only country that had ever practiced slavery (The Muslim Slave Trade dwarfs the Triangle Trade both in longevity and number of victims.)

And whites oppressing blacks in America is the only racism that has ever existed.

This is spectacularly false. Probably most racism consists of one group that looks a lot like another group assessing the other group as inferior.

The roots of Nazism are in scientific racism, aka social Darwinism, aka eugenics.

Scientific racism declared Slavs to be racially inferior to Germans. Slavs look much like Germans. You cannot differentiate between Slavs and Germans just by looking at them.

The Japanese decided that Chinese and Koreans were inferior races, and committed horrific atrocities against them.

Hutu declared Tutsi to be "cockroaches" and committed what has been called the fastest genocide in history, just with machetes and other hand-held weapons.

That's not what racism is. Vast chapters have been erased to accommodate a false narrative: whites oppress; blacks are oppressed. Ignore any fact that interferes with that.

One more thing. Whoopi revealed zero hesitancy in making her false statement. She spoke emphatically. Her tone was "Listen to me; I know." The concept behind that tone is the concept of "lived experience."

"Lived experience" trumps objective truth. History tells us that Whoopi is completely ignorant about Nazism. No matter. She is, in the intersectional bingo of identity, a black woman, and, thus, her identity as oppressed trumps any objective truth that any "white oppressor" might mention about the real history of Nazism and racism.

On January 17, 2022, the New York Times published a stellar review of the new book, "The Betrayal of Anne Frank." The book was scrupulously researched, the Times reported, and its authors concluded that Anne Frank was betrayed by Arnold van den Bergh, who happens to have been Jewish. The Times said that the evidence the authors adduced was "convincing if not conclusive."

The book became available on January 18, 2022, and it shot up the Amazon charts.

The book's arrival was beset with objections.

Today, February 1, "Dutch publisher pulls book that names suspect who betrayed Anne Frank," announced the New York Post. “We offer our sincere apologies to anyone who might feel offended by the book," the publisher said.

One can't help but compare the fate of this previously well-reviewed book with the work of Jan Grabowski, who has made inflammatory comments about Poles and Poland.  Grabowski has been widely criticized. Interested readers can search the names "Jan Grabowski" and "Mayor Edward Malinowski."

One can't help but note that in one case, a well-reviewed book is "pulled" after it names a Jewish man as a potential collaborator, and, in the other case, the role a Polish man played is debated, and yet the author who condemns him is not abandoned by his publishers or academic colleagues.

I don't know if the Anne Frank book is as good as the New York Times and Sixty Minutes episode present it as being. I don't know if Mayor Malinowski was scum or heroic.

We do know the following: some Poles helped Jews. Some Poles were criminal scum. All Jews were victimized by Nazis, but some Jews purchased whatever scrap of life they could by collaborating with Nazis, by betraying other Jews, for example.

Why the difference between the treatment of Grabowski's scholarship and that of Rosemary Sullivan and the investigators whose work she documents in "The Betrayal of Anne Frank"? I try to answer that question in my own book, "Bieganski."

Beloved Black American Actress Whoopi Goldberg: "The Holocaust is not about race."

Events like this just boggle my mind. Her stupidity. Her arrogance. The Suffering Olympics behind her statement. Black suffering must trump Jewish suffering because Jews are white. That if anyone but Whoopi Goldberg said this, there would be a much bigger controversy.
Posted by D Goska at 2:41 PM No comments: