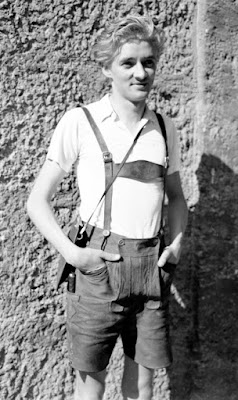 Living in a town in Indiana with many German-Americans was very hard for me. Especially the Germanic part. And that's another prejudice that I have. That I had. Because I don't think that I have it anymore, but maybe I do. Germans. I don't like hearing the language.

My husband says endearing things to me in German and I can't stand it. He does that just to make fun and I don't like it. It turns me off totally.

I lived in Germany and Austria. I was a hippie and I was traveling around. It was awful. When we were in Austria the woman who was our landlord hated Jews. She stole our passports. She was very cold and mean. [in the home of an acquaintance] They had pictures of SS soldiers all over their walls. A doctor wouldn't even examine [a Jewish acquaintance]. When we got to Bremen, they instigated a bunch of people at this tavern where everybody hung out at to beat up on my brother. He got beat up on.

[Informant has also lived in Israel.] The Israelis have an attitude towards the different nationalities that are there. They categorize every nationality. And make jokes about 'em, too. They have a derogatory word about the Germans. They call them 'Yekkes.' My mother talked about how cold Germans are. And how regimented. And this [German Jewish] woman was sitting there and I felt so bad.

Informant was a fifty-year-old housewife who had lived most of her life in the Midwest. Her ancestors came from Hungary and Lithuania.