Masha Gessen in the New Yorker Re: Poland, Historians, and the Holocaust 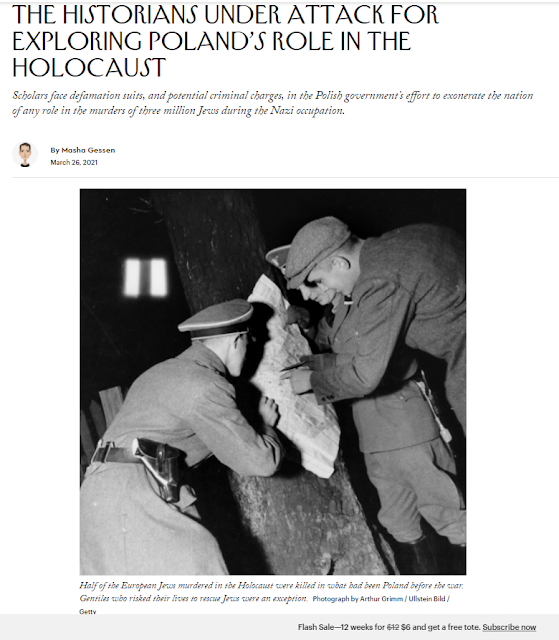 Here's a link to the article in the New Yorker

I have not read the article (no time to do so). Can someone read it and offer a summary? And thanks to Jerzy for alerting me to this article.

I've been watching "Allen v. Farrow," one of the very best documentaries I've ever seen. It's a beautifully produced, meticulous exploration of the break-up of the romantic and professional partnership of Golden-Globe-winning actress, author, and humanitarian Mia Farrow and writer-director-actor Woody Allen.

While in a committed professional and personal relationship with Farrow, a relationship that had lasted over a decade, Allen simultaneously had an affair with Farrow's daughter, and the sibling of his own three children, Soon Yi Previn, whom he had known, and served as a father figure toward, since she was ten.

Later, Dylan Farrow, Allen's daughter, who was seven at the time, accused Allen of molesting her. Professional therapists had been, for some time, counseling Allen about his improper behavior toward Dylan, behavior that had not previously risen to the level of sexual touching, but included intense, obsessive contact. Before adopting Dylan, Allen had, it is alleged, expressed a desire to adopt a pretty blonde girl. Dylan was, indeed, a pretty blonde girl.

The documentary treats this story with the seriousness it deserves. There are real victims here, and the documentary respects that. It's riveting, heartbreaking, and illuminating as any Greek or Shakespearean tragedy.

Episode two of the four-part documentary features journalist and author Richard Morgan. Morgan has read the entire Woody Allen collection at Princeton University. Morgan was appalled. Based on this collection, Morgan concluded that Allen is obsessed with misogynist sexual fantasies of teenage girls. Morgan makes his case in a June 4, 2018 Washington Post article entitled, "I Read Decades of Woody Allen's Private Notes. He's Obsessed with Teenage Girls. His 56-Box Archive Is Filled with Misogynist and Lecherous Musings."

Sometimes Allen is in his work, but even when he isn't, his characters are often obvious stand-ins. In a story that takes place wholly in the mind of a man named Moses Rifkin, he writes: "Unlike the Jewish girl — the shiksa is not guilt-ridden — not a complainer — she is abandoned, fun-loving, and above all promiscuous. The shiksa will perform any sex act." In "Rainy Day," Roland Polland, a fictional film director, confesses to a young female college student, "I took no risks because the bitch goddess of success opened her legs in my brain." But that's Roland Polland. Not Woody Allen. The "c'est moi" is always crossed out. He is Alvy Singer. He is Moses Rifkin. He is Isaac Davis. He is Sandy Bates. He is Zelig.

Allen's penchant for "shiksas" is the subject of much commentary. One October 20, 2009 piece from the Tablet, "Gentlemen Prefer Blondes: Why Jewish producers kept Jewish women off stage and screen" by Liel Leibovitz reports

A friend of mine—I'll call her S.—has much to be proud of. She's an accomplished actress, a terrific mother, and a loving wife. Yet the one thing she's best known for doesn't involve her at all: when she was a teenager, she had a brief but tumultuous affair with Woody Allen, a man many years her senior, a tryst that ended up serving as the raw material for Allen's Manhattan. When the writer and director recreated the relationship on film, however, he did not choose someone who looked like S.—a Jewish beauty with dark, curly hair—but opted instead for Mariel Hemingway, so much of a stereotypical all-American girl that her blue eyes and blond hair came across even in the black-and-white film.

While S. is too prudent to comment on this switcheroo, one does wonder what may have motivated the transformation: why turn a bright-eyed brunette into a fair-haired ingenue?

This, of course, is not a new question, nor is it limited to S.'s experience. Since the dawn of American entertainment, Jewish women were largely rendered invisible, absent everywhere from burlesque to Hollywood to prime-time television. Instead, they watched as their sons and brothers and husbands became successful producers, directors, and impresarios, powerful men who then chose to populate their works with a parade of sexy, sultry shiksas who looked nothing like their female kin.

"I had been taunted, tormented as a 'Nazi child' in the Jewish neighborhood I grew up in: Matawan, New Jersey. [The family moved to a rural area of the state when she was a teenager.] My father ran around in lederhosen. I had doors slammed in my face." Her parents were both postwar emigres, her father — by his account — a 14-year-old ditch-digging conscript into Hitler's army serving near the French border before the end of the war. "Woody's the uber-Jew, and I'm the uber-German," she says. While the pair never discussed their difference, she contends it hovered, at least on her end: "There was a chip on my shoulder about wanting to please those who cast me aside. I wasn't confrontational because I thought, 'Nobody likes Germans.' "

Ethnic tribes stereotype their other of choice. For many Jews, "shiksas" as the ethnic other. "Shiksa," as sexual in a way that Jewish women were not. Leon Weliczker Wells wrote

The farmers, who, even considering their low living stand ards, couldn't support an entire family, sent their daughters to town to become servants in the Jewish households. I never knew a Jewish girl to be a servant in a Polish household, but the reverse was the norm. The gentile maid was referred to in negative terms as the "shiksa" (Hebrew for "a vermin like a cockroach"). There was a repertoire ofjokes about these girls. For example, there was the joke about how Jewish mothers made sure that the servants were "clean," because their sons' first sexual experience was usually with this girl. At that time, our society expected a male to fulfill his sexual needs; Jewish daughters were for bearing children.

Philip Roth was another famous American Jew who wrote about shiksas.

But the shikses, ah, the shikses are something else again […] I am so awed that I am in a state of desire beyond a hard-on. My circumcised little dong is simply shriveled up with veneration. Maybe it's dread. How do they get so gorgeous, so healthy, so blonde? My contempt for what they believe in is more than neutralized by my adoration of the way they look, the way they move and laugh and speak.

Perhaps the first exponents of this tradition were the Minsky Brothers, the influential proprietors of a popular New York City burlesque empire in the first decades of the last century. "If you were a burlesque stripper, you had to be a blonde or a redhead, never a brunette," Rachel Shteir, author of Striptease: The Untold History of the Girlie Show told me. The brothers, she added, had a readymade explanation for their proclivities: Jewish women, they argued, were simply too pure to lust after. "They would say, 'we're not stealing your mothers and sisters and aunts and putting them on stage and taking away their honor,'" Shteir said. "They would say that they were only putting the shiksas on stage. As heinous as it is, that was their reasoning."

In the movie "Manhattan," Allen depicts his character in a relationship with a teenager, played by Mariel Hemingway. Hemingway reported in a subsequent memoir that Allen tried to seduce her when she was 16 years old, and promised, as part of that seduction, to take her to Paris. Hemingway wrote this in 2002. In the HBO doc, in a previously unseen film, young Dylan Farrow, in a film recorded shortly after the alleged assault, said that Woody Allen, while sexually molesting her, promised her that after he was done, he would take her to Paris. Looks bad.

I think Woody Allen is a bad guy. I don't think his ethnicity has any relationship to his being a bad guy. There are plenty of non-Jewish bad guys.

That Jews, like non-Jews, stereotype others is well documented. Poles have long been stereotyped by Jews, as amply document in Bieganski. Of course Poles stereotype Jews as well. What is troubling is the double standard. One groups' stereotyping is regarded as anathema, and the other group's stereotyping is handed a free pass.