The Holocaust: An Unfinished History by Dan Stone. Book Review from the Daily Mail 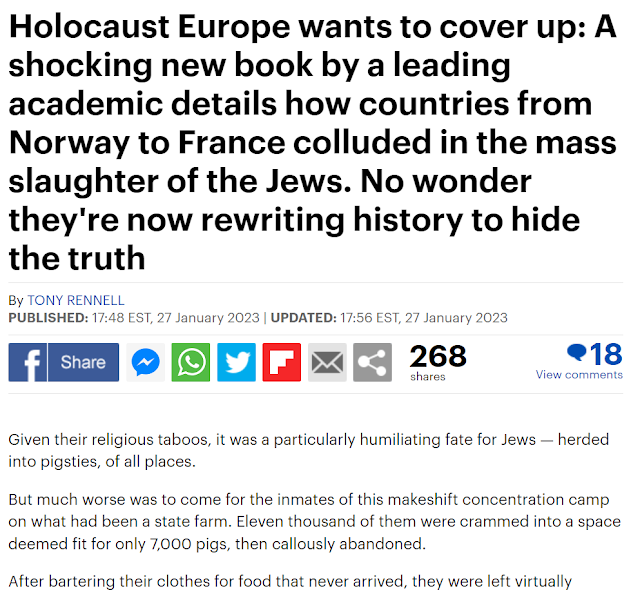 New book: The Holocaust: An Unfinished History by Dan Stone. Alleges that *all* of Europe, more or less, produced active participants in the Holocaust. From Sweden to North Africa, from France to Ukraine, local leaders contributed to the Holocaust. No country comes across well, including previously celebrated countries like Holland and Bulgaria.

Read the review here. Thank you to Jerzy for sending this in. 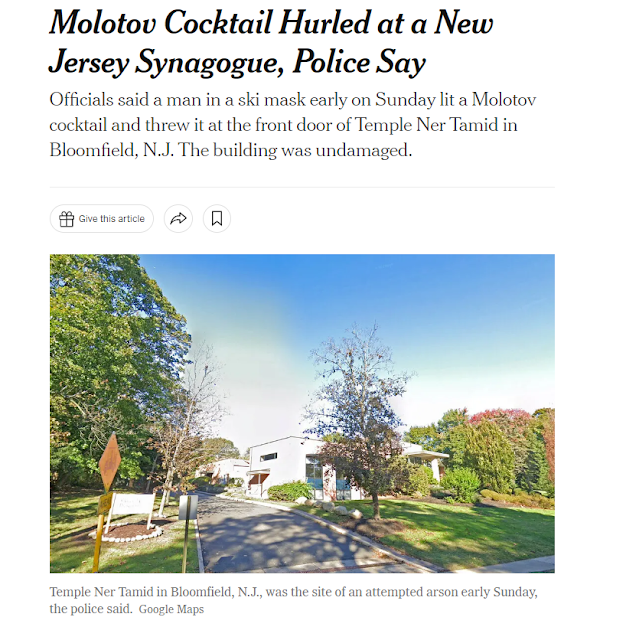 Czeslawa Kwoka. Died in Auschwitz when she was 14.

Katarzyna Kwoka. She was Czeslawa's mother and she also died in Auschwitz

Czeslawa and Katarzyna were both Polish Catholics.

January 27 is Holocaust Remembrance Day, on the anniversary of the Red Army marching on Auschwitz.

We can do two things at once. We can acknowledge the horror of what the Nazis planned and did to Jews.

We can also acknowledge what the Nazis planned and did to Poland and to Catholic Poles.

Here's an unedited transcript from an interview I did with a university student.

"I get this feeling that Polish people don't really have a full respect for Jewish people and that there is an anti-Semitism still lingering and the main thing that makes me think that is an article I read in the Washington Post a month or two ago and what happened was that some warehouse that was very near Auschwitz was recently turned into a discotheque."

Me: "I know this will sound like a ridiculous question, but can you tell me what Auschwitz was?"

My goal: to discover if informant knew that Poles had been interned in Auschwitz.

"Auschwitz had been a concentration camp that a great number of Jewish people were brought to by train. A lot of Jews worked there and died of starvation.  And I wanna say that, uh, zyklon b, the chemical that was thrown into the so called shower stalls was instituted there."

Me: "Do you know about the history of non-Jews at Auschwitz?"

"No, I don't any specific history of non-Jews in Auschwitz. " 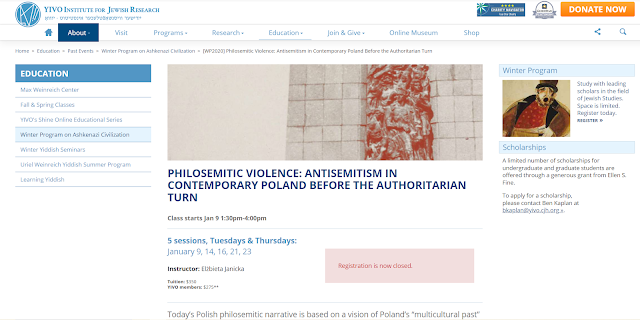 Elzbieta Janicka, identified by YIVO as an "historian of literature, cultural anthropologist, visual artist. M.A. at the Université Paris VII Denis Diderot; Ph.D. at Warsaw University" appears to be making a tidy living by disseminating the Bieganski, Brute Polak stereotype at YIVO.

A previous post mentions a course she is teaching at YIVO. That course is described in ugly, bigoted, inflammatory language.

Jerzy sent in info about another Janicka course. This course description asserts that "antisemitism remains a community building force and one of the most powerful political tools behind the collapse of liberal democratic institutions."

I copied the above sentence from the YIVO website. I left out one CYA weasel word and I did not use ellipsis. I did that because I have contempt for YIVO and Janicka's hate-mongering project, and because I have no patience with her attempt at using weasel words to CYA. In any case, the word I left out is "non-negligible." It's such a stupid attempt at CYA. Janicka, I have never heard of you before, and I don't know you from Adam, but in using CYA weasel words, you have no intellectual class. Assert something or don't assert it. That's what real scholarship does.

I don't live in Poland and I am in no position to assess the truth value of Janicka's assertion. I asked some folks who live in Poland for their assessment.

One said, "I am a left-wing, liberal Pole who despises the current Polish government. Even from my point of view, what Ms Janicka says here is utter falsehood. These are obviously incorrect statements and I do not believe you could cite any factual support for them. If she is teaching about Poland based on that, she is either defrauding the students and her employer by knowingly providing them with incorrect information, or she has no idea about Poland and is grossly incompetent."

Another said, "I am a conservative leaning Pole who does not hate the current government and I agree with [the above quoted liberal Pole] 100%. I despise how Ms. Janicka is spewing hatred between Jewish people and Poles. This is evil."

Another said, that Janicka is a "charismatic figure among radical, left wing intellectuals who's personal mission is critique of Polish culture and society as 'catholic,' 'bigoted,' 'traditionally antisemitic,' 'nationalistic' etc. Unfortunately Janicka very skillfully translates her own obsessions and prejudices into fashionable humanistic discourses. It has nothing to do however with reality and basic scientific decency. It is a tragic case which illustrates a general problem of contemporary degeneration of academic standards."

Dutch World War II Controversy: How to Tell the Story of Nazi Occupation in Holland 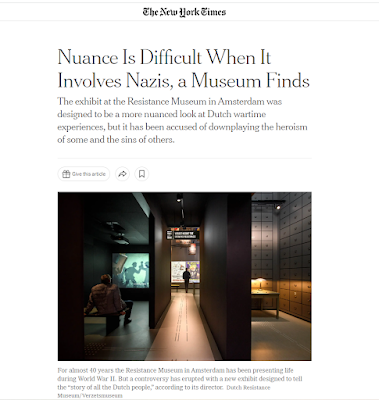 The Bieganski Brute Polak stereotype depends for its power on an insistence that Poles are unique, more or less freaks, not normal.

Most aspects of Poland's coming to terms with WW II, that purveyors of the Bieganski, Brute Polak stereotype insist are unique to Poland, have played out in other countries, to a greater or lesser extent.

A Dutch museum has a new exhibit that depicts Dutch heroes and also Dutch Nazis. This depiction has raised hackles in the Netherlands.

As reported in the New York Times

In recent weeks, though, the museum has unveiled a new display designed to be more inclusive and to illustrate the nuance and complexity of history.

The exhibit portrays the lives of victims and perpetrators, bystanders and resisters, “and everything in between,” said Liesbeth van der Horst, the museum’s director, in an interview. “We wanted to tell the story of all the Dutch people.”

So in addition to describing the life of Janny Brilleslijper, a Jewish woman who refused the Nazi command to register her “race,” the displays also focus attention on Gerard Mooyman, a Dutch teenager “so impressed” by German military propaganda that he signed up to serve with its army at the front. They are two of roughly 100 new, short vignettes at the museum, including one that focuses on Wim Henneicke, who led a “Jew hunting” brigade of citizens who were paid for each person they delivered to the Nazis...

Bieganski at YIVO the Institute for Jewish Research

YIVO is running a course teaching students how to hate Polaks. It appears that the teacher is herself Polish. 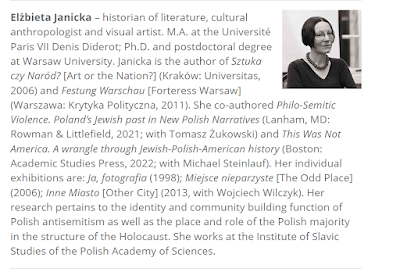 Let's rewrite YIVO's course announcement and see how it plays.

Writings from a Heroic Anti-Communist

Marxist-influenced ideas affect American lives, often under the banner of "Woke." Some Americans who do not enjoy Facebook and Twitter censoring their speech and schoolboards indoctrinating their children have turned for inspiration to heroes of the anti-communist resistance from the former Soviet Empire. "What would Solzhenitsyn do?" they ask, or, "What would Vaclav Havel and the members of Charter 77 do?" In 2020, Rod Dreher published Live Not By Lies, arguing that contemporary American "Christian dissidents" could and should learn from past Eastern European dissidents.

It was with that approach in mind that I began to read Love and Social Justice: Reflections on Society, a collection of short essays by Blessed Cardinal Stefan Wyszynski. It was translated by Filip Mazurczak and published by Arouca Press in 2021. It is 554 pages long.

It's difficult to communicate to Americans the overwhelming stature of Stefan Wyszynski. Some background will help. What would come to be called the Polish-Lithuanian