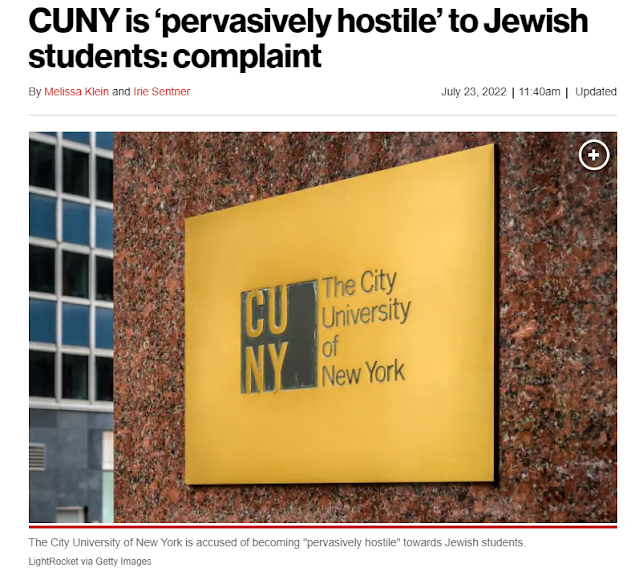 The New York Post published an extraordinary article on July 23, 2022.

The article alleges overt anti-Semitism at CUNY. That is astounding enough. Another astounding feature of the article is that it never mentions who is harassing, threatening, and fomenting hatred against Jews on the CUNY campus. Never. Who is doing this? The article does not say. Astounding.

BTW, I have no idea who the assailants are.

The City University of New York has become a “pervasively hostile environment for Jewish students,” according to a newly filed complaint to the US Department of Education that alleges violations of the Civil Rights Act.

“Some of the harassment on CUNY campuses has become so commonplace as to almost be normalized,” according to the complaint by the American Center for Law & Justice in Washington DC., which cites a litany of harassment going back to 2013.

Court papers cite incidents at Kingsborough Community College in Brooklyn where a Jewish professor “found swastikas carved into the door and her keyboard drenched in urine” and another Jewish professor from Israel was asked how many people she had killed.

The college’s former interim president complained there were “too many Jews” among the school’s faculty, The Post reported.

At Brooklyn College in 2016, students interrupted a Faculty Council meeting “to demand the removal of all Zionists from campus,” the Center said in its complaint, which noted students called the council’s chairman, who was wearing a yarmulke, a “Zionist pig.”

You can read the full article here

I did a Google search and found this article from Tablet. Again, I did not find any perpetrator demographic identified.

How, I wondered, had CUNY become like this? What was it about the politics of the institution, or the politics of the famously Jewish city that operated it, that had allowed the university to reach this point? David Brodsky, chair of the Jewish studies department at CUNY’s Brooklyn College and a fellow line-stander, was meticulously nonpartisan in his analysis. The problem is much bigger than CUNY: “Antisemitism is systemic in Western society. It manifests in ways that are under people’s radar,” the Talmudist explained. “Unless you recognize where it’s coming from systemically, you fall prey to it.”

I wrote to Prof. Brodsky.

I read a Tablet article addressing anti-Semitism at CUNY. You were quoted as blaming the harassment on "Western society." I find your statement to be unbelievable. I do not believe that, for example, whoever it was who urinated on a Jewish professor's computer, is a representative of "Western society." For many readers, I suspect, blaming these assaults on "Western society" is a less-than-courageous, less-than-accurate way of avoiding naming the actual assailants and their actual agenda, because those assailants, whoever they are, are members of a protected group.

I do not know who is behind these assaults, but given that Israel is frequently mentioned, I am guessing that these assaults have been carried out by Muslims. I am using the same technique to read about anti-Semitism at CUNY as I used to use to read Soviet-Era news. Something can't be said because it is politically dangerous to say it, so people are engaging in circumlocution.

I could be wrong, but I've read a couple of articles about anti-Semitism at CUNY, one in the Post and one in the Tablet, and neither makes clear who is carrying out these assaults, so I have to guess. Perhaps the assailants are not Muslims, but the media's and your declining to speak frankly is perhaps inadvertently placing the blame on Muslims.

If I am interpreting your comment incorrectly, please let me know. Thank you.

A New Biography of a Lesser-Known Nazi Confounds the Reader. How to Explain the Evil of Reinhard Heydrich? 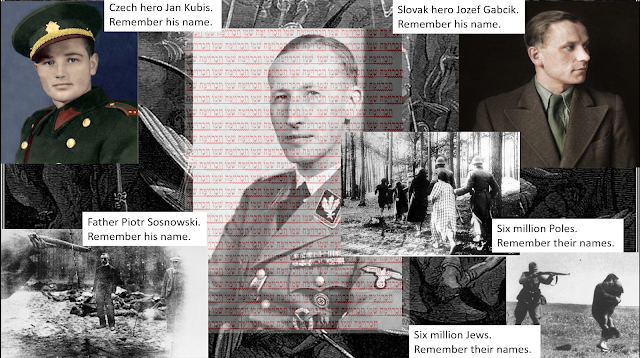 A New Biography of a Lesser-Known Nazi Confounds the Reader
How to Explain the Evil of Reinhard Heydrich?

Who's the most popular Nazi? I thought of asking this as a poll question on Facebook, but I've been in Facebook jail so many times I dared not risk it. I turned to Google. Adolf Hitler gets thirty-one million hits. Eva Braun, two and a half million. Joseph Goebbels, two and a quarter million. Heinrich Himmler, almost two million. Albert Speer, a million and a half. Hitler's dog Blondi, 638 thousand. Reinhard Heydrich is just slightly more represented in my Google search than Hitler's dog. Heydrich racks up 787 thousand hits. The numbers change day by day, but the proportions remain about the same. Heydrich's relatively low profile astounds me, given the immense evil this – entity – I can barely stand to call him a "man" – wreaked upon the world.

The Hangman and His Wife: The Life and Death of Reinhard Heydrich, is a May, 2022 book published by Knopf. The book is 656 pages long, with 570 pages of narrative followed by notes and an index. There are 110 black-and-white photographs. Author Nancy Dougherty knew Lina Heydrich, Reinhard Heydrich's widow, and interviewed her for the book, as well as other surviving Nazis, including Albert Speer. Dougherty is a gifted writer who can report horror in beautiful prose. I'd recommend this book to anyone curious about Nazism or simply about human evil.

A Rabbi Not Being Helpful During a Difficult Time in America. 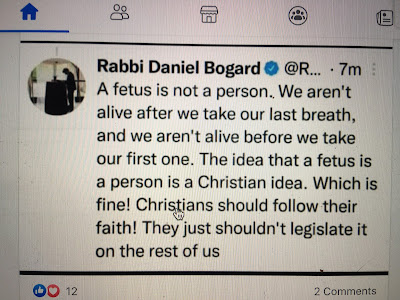 If a Catholic priest singled out Jews for criticism during this difficult time in America, that priest would be raked over the coals, and deservedly so.
Posted by D Goska at 5:38 PM 29 comments: 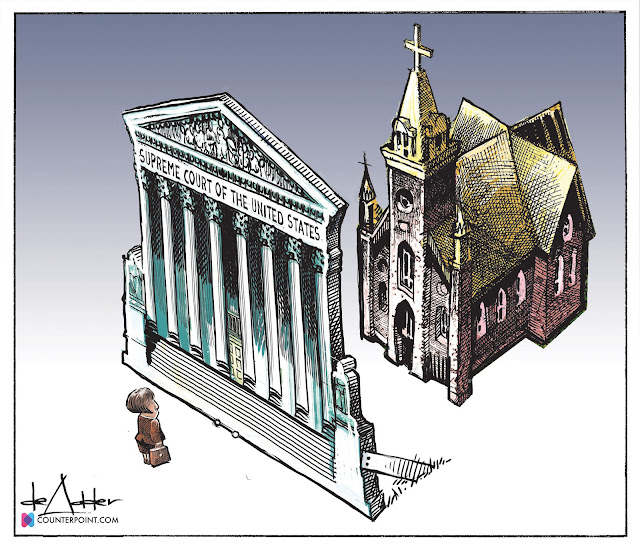 After the SCOTUS decision overruling Roe v. Wade was announced, my Facebook page was awash in anti-Catholic rhetoric of the most primitive and hateful kind.

Part of the raison d'etre of the Bieganski, Brute Polak Stereotype is Christophobia, as anyone has read the book, and this blog, knows.

The essay, below, addresses the Christophobia flooding social media in recent days.