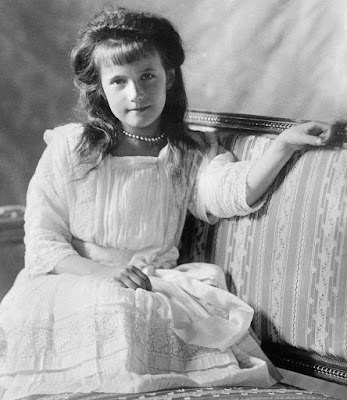 My maternal grandparents were from Ukraine. Probably Odessa, but I’ve also been told Kiev. They left that part of the world during the Revolution. My grandfather had been in the Bolshevik army, one of very few Jews, they always said. This is the story my grandfather told me one Thanksgiving – I was probably 12 or 13 – about why they left:

As an army soldier, probably in his late teens or early twenties, he had been assigned to the unit responsible for guarding the palace after Czar Nicholas and his family were captured. My grandfather in particular had some responsibility for guarding Nicholas’ youngest daughter, Anastasia.

At some point, she asked him to get her a drink because she was very thirsty. He knew he shouldn’t, but he felt bad that she should be thirsty.

When he went to fetch her a drink, he accidentally left the door unlatched and she escaped. This would make him the person responsible for the fact that for most of the 20th century, there were nearly a dozen women all claiming to be Anastasia.

Fearing for his life, as he explained it, both because he had let her go and he was a Jew, he headed for the woods, firing at the soldiers chasing him. Somewhere in this, he managed to grab my grandmother and head for the mountains.

They walked through the mountains for some period of time. During this trek, my grandmother gave birth to her first son, my Uncle ___. There’s another story in here that my grandfather used to tell – half in English, half in Yiddish – about how my grandmother kept my uncle swaddled close to her bosom. But they had so many clothes on and were traveling so hard that somewhere along the way, he popped out and they didn’t realize it.

They had to go back down the mountain to find him. Anyway, somehow they managed to get to a coast – I’m not sure where – and board a boat bound, I believe, for Canada. At a stop in Belgium, my Aunt ____ was born. After coming through Canada, they settled in Brighton Beach, NY, a haven for immigrants from Odessa.