"The Jew is Clever. The Pole is Obnoxious, Loud, and Stupid."

I was reading Slavoj Zizek's book, Sublime Object of Ideology.

A Jew and a Pole are traveling on a train. The Pole badgers the Jew to reveal the secret to Jewish wealth. The Jew plays the Pole for a fool. … The joke is coercive. It makes me think of the Jew as clever and the Pole as obnoxious, loud, and stupid enough to get duped.

Informant was a 26-year-old, American, male graduate student, neither Polish nor Jewish

Slavoj Zizek is a superstar academic who self-identifies as a Communist. See here. A screencap of the page featuring the joke is below. 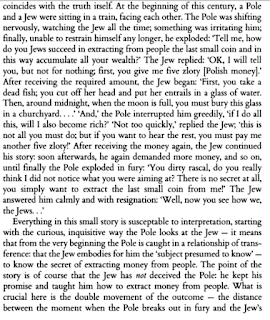