"Germany was magically transformed from a genocidal Reich to a place where there were barely any Nazis to be found": New York Times 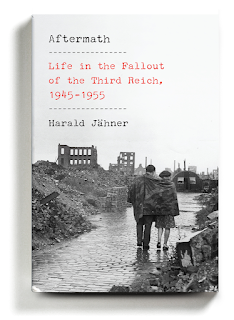 One of the main arguments of my book Bieganski: The Brute Polak Stereotype is that guilt and blame that should have fallen on German Nazis did not, because Germany was central to the West and to Israel in a way that Poland was not. After the war, Germany was rehabilitated in the public mind and in popular culture. Numerous blog posts on this blog comment on sexy, heroic, and otherwise appealing Nazis in films and TV. See for example the following posts
here
here
here
here

Why Poland was chosen for blame is a long story, one told in the book.
Harald Jahner has published a new book, "Aftermath: Life in the Fallout of the Third Reich: 1945-1955." Jennifer Szalai published a review in the New York Times on January 9, 2022.
The review begins,

It was a startling disappearing act, one for the ages. Right at the moment when Hitler killed himself in his bunker on April 30, 1945, Germany was magically transformed from a genocidal Reich to a place where there were barely any Nazis to be found.
“No one was a Nazi,” the journalist Martha Gellhorn wrote about the end of World War II in Europe, mordantly recalling how all the Germans she met insisted they had hidden a Communist or were secretly half-Jewish. The photojournalist Margaret Bourke-White heard the phrase “We didn’t know!” with such “monotonous frequency” that it sounded “like a kind of national chant for Germany.”
In “Aftermath: Life in the Fallout of the Third Reich, 1945-1955,” the Berlin-based journalist Harald Jähner is similarly skeptical, describing how the majority of surviving Germans were so preoccupied with their own suffering that the dominant mood was one of self-pity. “They saw themselves as the victims,” he writes, “and thus had the dubious good fortune of not having to think about the real ones.”
The pointedness of this sentence is quintessential Jähner; he does double duty in this fascinating book (translated into English by the gifted Shaun Whiteside), elegantly marshaling a plethora of facts while also using his critical skills to wry effect, parsing a country’s stubborn inclination toward willful delusion. Even though “Aftermath” covers historical ground, its narrative is intimate, filled with first-person accounts from articles and diaries. The original German title was “Wolfszeit,” or “Time of the Wolf.” The postwar Germans were fond of animal metaphors. Those who stockpiled supplies were “hamsters,” while those who stole from the hamsters were “hyenas.” One could never be sure what the wolf was up to, “since the ‘lone wolf’ had just as frightening a reputation as the whole pack,” Jähner writes.

You can read the full review here.
Posted by D Goska at 10:06 AM