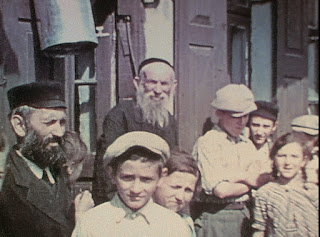 An American man found three minutes of film footage his family members took in Poland during a 1938 visit. That three minutes of footage has been extended in an acclaimed book-length publication and now a documentary film.
In reading about this new documentary, I cannot help but think of a passage in Bieganski, the Brute Polak Stereotype.
The three minutes of film footage shows normal, everyday people living their normal lives. Kids roughhouse, elders squint, women wear fashionable clothes. The devout are in religious gear and haircuts.
The viewer knows what these innocent souls cannot know -- within a couple of years, most of them will have been murdered by Nazis. The Jewish character of the town is doomed to extinction.
Given that horror, one must speak of these people in the most reverent of tones, and the surrounding Polish non-Jews will, inevitably, become the sole fly in the ointment.
One can't speak of real-life conflicts between Polish non-Jews and Jews that were based in real-life concerns, because to do so would be obscene.
The beginning of the passage from Bieganski is below. One can read the rest of the passage in the book itself.

"Do Not Speak Ill of the Dead:"

The Difficulty in Treating Polish Jews as Ordinary Humans

Anne Karpf wrote of the difficulties she faced whenever she felt any discomfort with her parents. "Hating one's parents is a necessary stage of childhood, like becoming potty-trained. We bypassed it. How could you hate those who'd already been hated so much?" Whenever Karpf was a naughty daughter, others reminded her, "Remember what she's been though." Karpf resented this. "I came to abominate what she'd been through no longer on her account, but on ours" (Karpf 38). Karpf's parents' status as virtuous victims defined her as something else. "Their world had been split into good and bad: if you weren't one, you must be the other" (Karpf 40). And virtuous victims they had to be.

It's hard to speak about Holocaust survivors in anything but a reverent tone or without turning their suffering into a sacrament. People expect of them abnormally high standards of behavior, as if a dehumanizing experience might somehow dignify and elevate, and along with their worldly goods, they should also have lost all worldliness. (Karpf 249)

One of the barriers to seeing Bieganski as a stereotype, rather than an accurate representation of reality, is the romanticization of pre-Holocaust Polish Jewish culture, typified by elite authors like Sholem Aleichem, source of the stories on which Fiddler on the Roof was based, and the post-Holocaust, Margaret-Mead-inspired, Life is with People. In them, Poland's Jews are depicted as saintly. By extension, and through application of The Law of Two to a Scene and The Law of Contrast, these works militate against their large audiences seeing Poland's non-Jews as anything but Bieganski. David Roskies summed up this popular understanding. "Jews danced and prayed all day until the Cossacks came and burned the place down" (18). Antony Polonsky pointed out that "Examples of … elevated nostalgia could easily be multiplied." He quoted that of prominent American rabbi, Abraham Joshua Heschel.

The little Jewish communities in Eastern Europe were like sacred texts opened before the eyes of God, so close were the houses of worship to Mount Sinai. In the humble wooden synagogues, looking as if they were deliberately closing themselves off from the world, the Jews purified the souls that God had given them and perfected their likeness to God…Even plain men were like artists who knew how to fill weekday hours with mystic beauty. (Polonsky "Shtetl")...