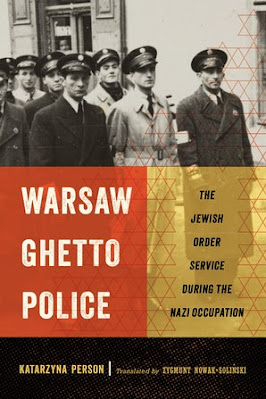 In April, 2021, Cornell University Press published a new book, ""Warsaw Ghetto Police: The Jewish Order Service During the Nazi Occupation," by historian Katarzyna Person. On August 11, 2021, The Times of Israel published an article about Person's book. The article had this lengthy title: "Interview: 'We Need to Understand Why They Acted As They Did'" New book dredges up Warsaw Ghetto ‘police’ who sent fellow Jews to their deaths. Polish historian Katarzyna Person quotes firsthand accounts to reveal the bleak reality that set the stage for the creation of the infamous Jewish Order Service."

The article, quite overtly, makes the following points:

1)    Nazi occupation was horrific. Luckier people like us have never experienced these horrors and could never understand them.

2)    Under these horrific conditions, a minority of Jews collaborated with the Nazis and contributed, in however small a way, to the Holocaust. We must understand and forgive what people did under horrible circumstances.

"WE NEED TO UNDERSTAND WHY THEY ACTED AS THEY DID" the article announces, in its opening lines, in all capital letters, quoting Person.

From the Article: "People acted differently," she said. "We have to understand it." When the call to join the Jewish Order Service first went out in 1940, there were more applicants than positions filled. "At that point, no one had any sort of employment for one year" … "In Warsaw, as in other ghettos, the Jewish police played a part in deportations," Person said. "Members of the Jewish Order Service tried to round up people, bring them to the place where most people were taken to the death camp." [Jewish Police had to fill Nazi quotas of Jews brought to the deportation site.]

Of the quotas, she said, "It really became a choice between the life of their family and child and somebody else's child. There was no way out."

3)    These volunteers who worked for the Nazis did not know what was to come. They didn't know that the Holocaust would occur, and that most of Europe's Jews would be killed. In this sense, their ignorance of the larger project exculpates them from any guilt.

From the article: "[The] key point is that when [the Jewish Order Service] was set up, nobody knew how it would end up. Nobody knew about the Holocaust, that the ghetto would be closed. Nobody really knew what was going to happen in a year and a half."

4)    To point out that Jews, again, in however small a way, contributed to the Holocaust is itself an anti-Semitic thing to do. When we talk about Jews who volunteered for Nazi service, we must always mention what pressures caused them to do so.

From the article: Although she said the existence of the Jewish Order Service is "something really pretty well-known," she added that "it's part of an antisemitic narrative, as well, in my country … It's a symbol of collaboration. I'm trying to dispel the myth of the story," Person explained.

6)    For a long time, no one wanted to talk about this; this book is a new contribution to Holocaust scholarship, 76 years after the end of WW II. No one talked about this even though, in the post-war era, Jews conducted trials of Jewish Police.

From the article: "I felt it's something we should talk about," she said. "Nobody has really carried out a proper look into it," Person says…after the war, many could not escape coreligionists who had documented their actions and brought them before Jewish honor courts. Internal communal trials were conducted in Poland before the phenomenon spread to Austria, Germany and even, in the 1950s, the newly independent State of Israel.

The article illustrates points of my own book, "Bieganski: The Brute Polak Stereotype." Poles and Jews are treated differently.

Compare how Poles are treated in relation to the six points, above.

1.) Critics of Poles insist that the horrors of Nazi occupation should not be invoked in discussions of actions committed by criminal Poles. No, those Poles committed the crimes they committed against Jews because they are essential Polish, Catholic, peasant, anti-Semites. Their very essence dictates their behavior, not any changing and changeable historical circumstance. People insist on this even though there are Poles who were heroic in one instance and criminal in another, defying any essentialist explanation for their behavior.

Critics of Poles insist that when Poles invoke the horrors of Nazi occupation, they are merely self-pitying and immature.

2.) Any attempt to understand and forgive Polish criminals would be dismissed as obscene.

4.) Criticism of the Jews who joined the police is anti-Semitic. The most egregious condemnation, not only of criminal Poles but of a posited evil Polish essence, is not only moral, it is mandatory. Poles committed crimes because Poland, and its majority religion, Catholicism, are sick and evil.

5.) One must not say that Jewish collaborators played any role in advancing the Nazi project. One must say that every criminal Pole who robbed a vulnerable Jew played an essential role in the Holocaust, and that, without those Poles, the Holocaust never would have happened. Thus, the Holocaust is very much a Catholic project, because Poles were largely Catholic.

6.) That a book about the Jewish Warsaw Ghetto Police is just coming out now is a great thing. No one will question its appearance 76 years after the end of WW II, even though Jewish survivors conducted trials of Jewish collaborators after the war. No one dare imply that a delay in scholarly attention to this topic reflects badly on Jews.

On the other hand, thorough scholarly attention to Polish criminals who killed, robbed, and tormented vulnerable Jews did not gain attention in the West until after the fall of Communism. This delay is proof positive that Poles are morally corrupt, cowards, insane nationalists, brain-dead Catholics, and incapable of keeping their own moral house in order.

As the my book and blog have repeated many times, Jews, as a group, suffered more than Poles, as a group, in Poland during WW II. That reality must never be forgotten. But the extraordinary suffering of Jews should not be used to erase the devastation suffered by Polish non-Jews and the country itself.

Critics of Poles and Poland insist on doing exactly that, though. They downplay Polish suffering. Polish criminals didn't do the horrible things they did because they were in a hellscape of limited choices. They did the horrible things they did not only because they themselves were bad people, but because Poland, Poles and Catholicism are all essentially evil. One finds such conclusions in scholarly books. No such conclusion about Jews would ever find its way into a recent scholarly book, nor should it.

Too, it is undeniable that many Polish criminals who victimized Jews were anti-Semites. Polish anti-Semitism is a real thing. For these criminals, Jews were outside of the "Universe of Obligation." Katarzyna Person insists that the Warsaw Ghetto Jewish police lived under a peculiar set of circumstances and made their choices, choices that horrify us, based on those peculiar circumstances. She demands that readers understand those circumstances and those choices.

Just so, students of history should understand the peculiar historical and socioeconomic circumstances in Poland that pushed some Poles to regard Jews as outside their universe of obligation. Without that understanding, any conclusions one reaches about the actions of Polish criminals is of questionable worth. And we refuse, again, to learn from history.