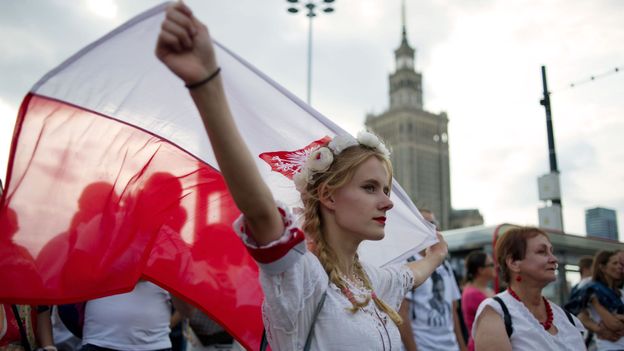 On December 29, the New York Times published an op ed arguing that Poland is "in the vanguard of European disintegration and democratic dismantling."
You can read the full article here.
Excerpts from the article, below.

What Happened to Poland?

Ms. Wigura is a sociologist and historian of ideas. Mr. Kuisz is a political analyst who is writing a book about Poland's illiberal turn.

…The government, led by the Law and Justice Party, has picked fights with the European Union, co-opted the courts, created legislation designed to muzzle independent media and taken a hard-line approach to women's rights … Poland possesses a traumatic, nervous sense of itself. The current government has tried to channel that anxiety, inveighing against migrants, Brussels and liberals to create a fortress mentality … Across Central and Eastern Europe … nativist governments or political movements are common. The region, whose experiments with nationalism resonate widely across the West, is something of a test case. By concerted effort among opposition groups, it can still be won back to liberalism and democracy. But if you want a sense of what the future of Europe might hold, look to Poland.

…The country set about joining the West, and did so with great success. The economy soared, Poland took its place in the European concert of nations, and citizens were mostly convinced that the West would bring them not only safety but a better life. Yet by the time the country had fully integrated, many had grown disenchanted. Free movement across the bloc led to a brain drain, leaving an aging population to an inadequate health care system. For workers, average wages lagged behind those enjoyed by Western counterparts.

Capitalizing on voters' frustrations, Jaroslaw Kaczynski, the leader of the Law and Justice Party, skillfully articulated the second path for securing sovereignty. Poland should follow the example of the interwar state, known as the Second Republic, which restored Poland's sovereignty after World War I … It was, after a coup in 1926, an authoritarian state. Democracy and the rule of law came second to a muscular projection of sovereignty …

But it comes at a cost. The country's growing isolation — which the government believes is a sign of Poland's independence — is in fact opening it up to the influence of Russia, something officials are loath to admit. The situation in Ukraine hints at where that may lead. To stave off invasion, President Vladimir Putin of Russia has demanded, among other things, that NATO limit the deployment of troops in post-Communist countries, including Poland. The prospect of falling once again under Russian tutelage is grimly possible.

Yet for now, the government seems to be tapping into a sentiment shared across the West. Sovereignty, as an organizing principle for political action, is back. In Britain and America, of course, clamors to restore faded national glory led to Brexit and the presidency of Donald Trump. In Europe, Mr. Kaczynski in Poland and Prime Minister Viktor Orban of Hungary are inspirational figures for the hard right, serving as examples to Éric Zemmour and Marine Le Pen in France and Matteo Salvini and Giorgia Meloni in Italy … they could conceivably end the Western model of liberal democracy as we know it. And unless it can settle its nervous sovereignty into democratic collaboration, Poland may have shown the way.