Blame the Catholic Church: Mark Regev in the Jerusalem Post on Polish-Israel Relations 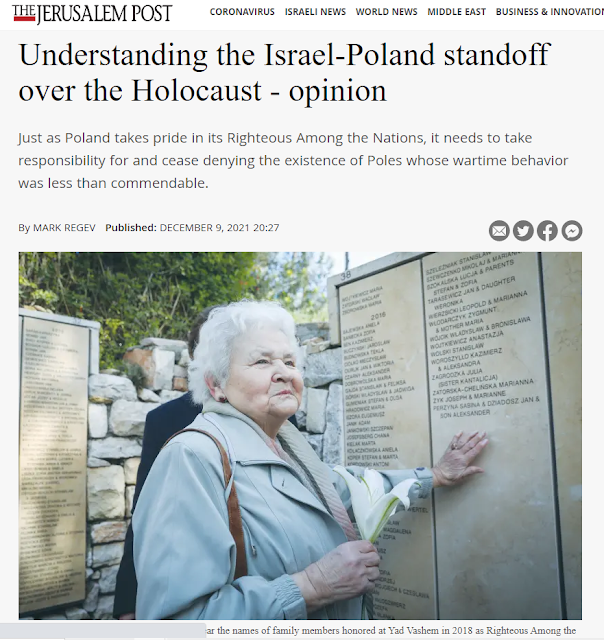 In the December 9, 2021, Jerusalem Post, op ed writer Mark Regev suggests a possible solution to tension between Poland and Israel:

"If there is to be a diplomatic solution to the Jerusalem-Warsaw face-off, it may be found in a formula that includes both Israeli recognition that Poland was a victim of Nazi aggression and Poland’s acknowledgment that numerous Poles either actively or passively collaborated in the mass murder of the Jews."

But then we get this, "Polish national identity and Catholicism seemingly went hand in hand. Thus, at best, for large numbers of Poles, the Jews were tolerated outsiders; at worst, they were the Christ-killers of the medieval Church."

Let's tinker with this a bit.

"Jewish identity in Poland went hand in hand with Judaism. Thus, at best, Polish Catholics were poylishe kop peasants (poyer) and at worst they were unclean, godforsaken goyim as warned against in the ancient Talmud."

Regev implies that Catholicism is responsible for the Holocaust. The tinkered with version of Regev's sentence could be used to argue that Judaism contributed to Jewish indifference to Polish suffering at various times in Polish history, including when Jews welcomed invading Soviet tanks with bread and salt, and when Jews were disproportionately represented among the Communist murderers, torturers, and erasers of history in post-WWII Poland. In fact, there are people who make that argument, and they are anti-Semites.

Decent people don't do that.

Otherwise, I like Regev's article and I admire his effort to address a difficult topic in a fair and evenhanded way. And of course I, like most Poles, acknowledge, as Regev states, that "numerous Poles either actively or passively collaborated in the mass murder of the Jews." We acknowledge this with great grief and a determination to live our lives in a way that makes the world a better place. By, for example, not distorting history to malign a religion, not Catholicism, not Judaism.

You can read Regev's article here

Thank you to Jerzy Pankiewicz for sending this in.