Bieganski Lives: Polish History Is Still Important Enough to Rewrite. And It Will Always Be So. 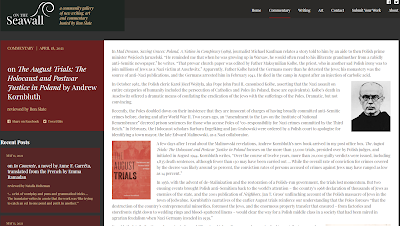 People often tell me that my book, "Bieganski: The Brute Polak Stereotype," is already, or soon will be, outdated. After all, Poland is no longer a country where 70% - 80% of the population are peasants, and the stereotype relies on negative images of peasants for its life.

These folks have not read the book, or, if they have, they have not understood it. Bieganski lives, and Bieganski will not soon die. If you read nothing else from the book, read the chapter dedicated to Bieganski and the Holocaust. This stereotype is doing hard work for the human race in its understandings of its own worst crimes.

I'm reading a new book, "The August Trials: The Holocaust and Postwar Justice in Poland," by Andrew Kornbluth, published by Harvard University Press.

I am finding enough to contend with that I paused in my reading to search how other readers are processing Kornbluth's handling of Poland.

In Mad Dreams, Saving Graces: Poland, A Nation in Conspiracy (1989), journalist Michael Kaufman relates a story told to him by an aide to then Polish prime minister Wojciech Jaruzelski. “He reminded me that when he was growing up in Warsaw, he would often read to his illiterate grandmother from a rabidly anti-Semitic newspaper,” he writes. “That prewar church paper was edited by Father Maksymilian Kolbe, the priest, who in another sad Polish irony was to join millions of Jews as a Nazi victim at Auschwitz.” Apparently, Father Kolbe hated the Germans more than he detested the Jews; his monastery was the source of anti-Nazi publications, and the Germans arrested him in February 1941. He died in the camp in August after an injection of carbolic acid.

Here's a screencap of the passage mentioned

It's just too perfect, isn't it? Poles are illiterate. Poles are janitors. Poles are not just anti-Semitic. Poles are "rabidly anti-Semitic." Poles, including Poland's most famous martyred priest, are motivated by xenophobic hatred, never love. Just add some kielbasa and stir.

Ron Slate's bio is here. I see nothing in this bio that informs the reader as to Slate's motivation for rewriting Polish history, slandering a martyred priest, or revivifying the Bieganski stereotype via that slander. And yet there it is. Bieganski lives.

Note that in the screencap from Slate's piece at the top of this blog post, there is a severe image of Father Kolbe next to the cover of a book that details crimes committed by Poles during the Holocaust.

In the photo, to modern eyes, accustomed to smiling selfies, Father Kolbe looks mean. I think this photo was taken during the Nazi occupation of Poland. That may play some role in Kolbe's unsmiling face.

This juxtaposition of images is doing very hard work. It's teaching you to hate. Poles, all Poles, are evil. This sainted Pole, Father Kolbe, who gave his life for another at Auschwitz, no less, who was previously imprisoned by the Nazis exactly because he was Polish, he was Catholic, and he was a priest, openly invited his own martyrdom by, after his release from Nazi imprisonment, helping Jews.

Father Kolbe's photograph, and a distorted falsification of his biography, carefully crafted to smear him for being the exact opposite of who and what he was, is used to illustrate comments about a book addressing crimes committed by Poles during the Holocaust.

Slate's piece is so sick and so twisted I lack the vocabulary to address it.

I can say this, though. Poles are often bashed for questioning how their history is handled.

People like Slate, for their own reasons, lie about Poles and Poland. I have no idea who Ron Slate is; I stumbled across his page. But there are folks out there invested in disseminating false histories of Poles and Poland. Yes, some Poles react to this by doubting what they hear.

In any case, below please find a passage from "Bieganski" that addresses Father Kolbe.

In 1941, Maximilian Kolbe sacrificed his own life for another's in Auschwitz. His 1982 canonization brought the previously obscure Kolbe international fame. As night follows day, this remarkable Pole was roundly denounced as a proto-Nazi.

The extreme language and distortion used to besmirch Kolbe was typified by Christopher Hitchens, who wrote that Kolbe was guilty of "stoking the very oven in which he was to perish." Given the Bieganski stereotype, Rabbi Zev K. Nelson choose a very telling word: Kolbe was "unclean" (Finley).

St. Louis University history professor Daniel L. Schlafly, Jr., and Warren P. Green, director of the St. Louis Center for Holocaust Studies, issued an eighteen-page response. Schlafly and Green do not depict Kolbe as without fault. Kolbe was certainly incorrect in some of his beliefs, and the journals he founded did publish a small amount of anti-Semitic material; there is no excuse for this.

What remains pertinent is that Kolbe's defamers exploit Bieganski to distort the real man. Kolbe criticized his editors for publishing anti-Semitic material, counseling love, not hostility. Nazis arrested Kolbe and other priests, and told them they were "Polish swine" slated for extermination. After his release, Kolbe invited martyrdom by counseling Poles to aid Jews. At his friary, Kolbe sheltered between several hundred and two thousand Jews fleeing Nazism. Kolbe was re-arrested. In Auschwitz he was known as a saint. Sigmund Gorson testified.

He knew I was a Jewish boy. That made no difference. His heart was bigger than persons – that is, whether they were Jewish, Catholic or whatever. He loved everyone. He dispensed love and nothing but love. For one thing, he gave away so much of his meager rations that to me it was a miracle he could live. Now it is easy to be nice, to be charitable, to be humble, when times are good and peace prevails. For someone to be as Father Kolbe was in that time and place – I can only say the way he was is beyond words. I am a Jew by my heritage as the son of a Jewish mother, and I am of the Jewish faith and very proud of it. And not only did I love Maximilian Kolbe very, very much at Auschwitz, where he befriended me, but I will love him until the last moments of my life. (Treece 200)