I Am Not Your Pole by Dr. Ewa Sapieżyńska; Bieganski, the Brute Polak in Norway. 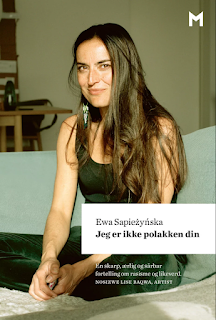 A Polish woman conquers Norwegian bookstores. "I'm not your Pole", a bittersweet story about emigration

The book "Jeg er ikke polakken din" (I'm not your Pole) by Ewa Sapieżyńska conquers the Norwegian best-seller lists, and the Norwegian Culture Council has decided to deliver the book by the Polish woman to libraries all over the country. And so the discussion about what it means to be a Pole in Scandinavia, what racism is and where are its limits.

In Norway, we systematically encounter worse treatment of minorities not only because of skin color, but also because of the country of origin - reports the situation of Poles in Scandinavia, Dr. Ewa Sapieżyńska, whose book "Jeg er ikke polakken din" ) storms Norwegian bookstores

Although the book is not yet available in Polish, the Polish woman's publication has caused a stir among Norwegians, revealing what many migrants in Scandinavia have been silent about for years

"Poles do not know how to smile or think, because they are horses. They work 14 hours a day," says one of the Norwegian employers about Poles

— Polish thinking in exile: "I'll bite my teeth, I'll last five more years, and then I'll come back to Poland and we'll build a house" - the sociologist explains the mechanism

I read all the publications that came out in Norway before the "Black Lives Matter" movement. Norwegians have sworn that there is no discrimination against minorities.

Meanwhile, in Norway, we systematically experience worse treatment of minorities not only because of skin color, but also country of origin or ethnicity. Reading and crying over stories of discrimination, I noticed that there are no Polish voices at all.

Meanwhile, Poles are the largest minority in Norway! According to statistics, nearly 105,000 people live here permanently. Poles. Norway is a small country with only 5 million inhabitants, so 105,000 Poles matter.

In fact, there are almost 200,000 here. Poles, if we take into account people coming to work seasonally on drilling platforms, on construction sites, in fields with potatoes or strawberries, as I started myself. These voices are not heard.

…For Norwegians, a Pole is a poorly paid worker who does not make demands, most likely speaks bad Norwegian and drinks a lot, or maybe he is a criminal at all.

…One Polish woman living in Norway wrote that she hears jokes about Poles being stupid at least once a week, some joke "how many Poles does it take to screw in a light bulb"...

In Norway they say "Polish working hours", when you work much more than Norwegians, they also talk about "Polish jobs", i.e. painting, cleaning, construction work.

…When you look at the list of bad words that Norwegian youth use in high schools, "Pole" ranks high, it is often used the same way as, unfortunately, "Roman" is used in Poland. Among this list, at the very top is a whore and gay, and below that is "Black", "Jew", "Pole", "Pakkis", meaning someone of Pakistani descent.

…In Norway I often don't feel seen as a human being, I am "only a Pole".

…I tried to forget about neighbors who asked me to take my Polish name off the mailbox because property prices in the area would go down. This is pure racism.

…The interviews conducted by the researchers show that if you are Polish, you are suitable for physical work, but you are no longer suitable for a hotel reception.

"Poles do not know how to smile or think, because they are horses. They work 14 hours a day and do not have to think," says one of the Norwegian employers about Poles.

…We bought a flat from a lady who turned out to be Polish. She was ashamed to speak Polish, she changed her name to make it more European, she changed her surname, she hid her origin. I tried to convince her: "After all, we can talk in Polish." She looked at me like an alien. She made me understand that it was a shame to speak Polish and switched fluently to Norwegian.

After many years abroad, I forgot for a moment that it was a shame to be Polish in Norway.

… It turns out that in Denmark he met the same aversion to Poles and Polish names in public places, especially where real estate could lose value, "because a Pole lives there".