Poland has had two Jewish kings.

In 842, according to one retelling, a Jewish man, Abraham Prochownik, was invited to become the next king of an embryonic Poland. If he turned this invitation down, it was implied, he would be put to death. Prochownik regarded this invitation with hesitance, and made a speech arguing for the coronation of Piast, peasant and wheelwright. Prochwnik's oratory was so persuasive that Piast, indeed, became king, establishing a dynasty

"Several versions of the story of Abraham Prochownik, the Jew who was offered the Polish crown, are compared in the third chapter. Polish nobles, despairing because of their own feuding over how and whom they would choose as king, finally resolved that the first person to enter the town the next morning would be acclaimed as monarch. This turned out to be the Jewish merchant/peddler, Abraham Prochownik. By a wise subterfuge, he leads the noble-electors to acclaim Piast, ancestor of the first Polish dynasty, as their king.

As Bar-Itzhak points out, this legend confers antiquity on Jewish residence in Poland, legitimizes their commercial activities, glorifies Polish Jews as responsible for the ascension of the famous Piast dynasty and asserts that, even in 'the good old days,' they did not seek power for themselves in the state.

Like most of the other tales, the earliest known versions of this story date from the 19th century, and the story could be and was used in the struggle for the expansion of Jewish rights. According to the author, there is also in this legend a message directed to a Jewish audience. Judaism recognizes a legitimate Jewish kingship only in the Land of Israel; accepting dominion in an adopted country is tantamount to assimilation. The rejection of the crown transmits a message that living in Poland does not mean relinquishing Jewish identity – a message that was particularly relevant in the nineteenth century."

Poland's other Jewish king was Saul Wahl. Here are Isidore Singer and Julius Gottlieb retelling his legend in the 1906 Jewish Encyclopedia

Saul Wahl was "a remarkable personage who, according to tradition, occupied for a short time the throne of Poland. The story connected with his reign is as follows: Prince Nicholas Radziwill, surnamed the Black, who lived in the sixteenth century, desiring to do penance for the many atrocities he had committed while a young man, undertook a pilgrimage to Rome in order to consult the pope as to the best means for expiating his sins. The pope advised him to dismiss all his servants and to lead for a few years the life of a wandering beggar. After the expiration of the period prescribed, Radziwill found himself destitute and penniless in the city of Padua, Italy.

His appeals for help were heeded by nobody, and his story of being a prince was received with scorn and ridicule. He finally decided to appeal to Samuel Judah Katzenellenbogen, the rabbi of Padua. The latter received him with marked respect, treated him very kindly, and furnished him with ample means for returning to his native country in a manner befitting his high rank.

When the time for departure came the prince asked the rabbi how he could repay him for his kindness. The rabbi then gave him a picture of his son Saul, who years before had left for Poland, and asked the prince to try and find the boy in one of the many yeshibot of that country. The prince did not forget the request. Upon his return to Poland he visited every yeshibah in the land, until finally he discovered Saul in that of Brest-Litovsk. He was so captivated by the brilliancy and depth of Saul's intellect that he took him to his own castle, provided for all his wants, and supplied him with all possible means for study and investigation. The noblemen who visited Radziwill's court marveled at the wisdom and learning of the young Jew, and thus the fame of Saul spread throughout Poland.

When King Bathori died (1586) the people of Poland were divided into two factions: the Zamaikis [sic] and the Zborowskis. There were quite a number of candidates for the throne, but the contending parties could agree upon no one. There existed at that time in Poland a law which stipulated that the throne might not remain unoccupied for any length of time, and that in case the electors could not agree upon a candidate an outsider should be appointed 'rex pro tempore' (temporary king).

This honor was then offered to Radziwill; but he refused, saying that there was a man who belonged to neither party, and who in wisdom and goodness was far superior to any one else he knew. That man possessed only one very slight shortcoming, and if the Diet would make his election unanimous, he (Radziwill) would acquaint it with his name. Accordingly, Saul's name was solemnly proposed; and amid great enthusiasm, and shouts of 'Long live King Saul!' Wahl was elected to this high office. The name 'Wahl' was given him from the German word 'wahl' (= 'election').

Traditions disagree as to the length of his reign. Some state that he ruled one night only; others make it a few days. All, however, are agreed that Saul succeeded in passing a number of very wise laws, and among them some that tended to ameliorate the condition of the Jews in Poland. Although this story cannot be supported by any historical data, it gained a firm place in the belief of the people." 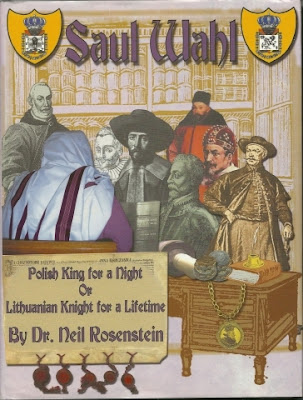