Adam Aston and Henry Vars: The Sound of the Anders Army. By Michal Karski 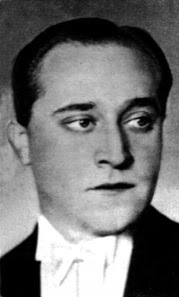 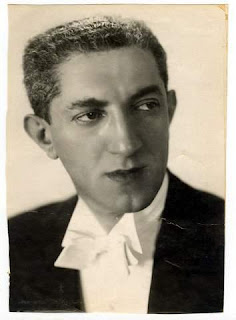 So many Jewish lives were cut short during the wartime occupation of Poland by Nazi Germany that to write about any Polish Jew living a long life is unusual; to write about individuals not only escaping the horrors of the time but going on to have successful careers is exceptional.

There is a frequent riposte made by Polish nationalists to the equally frequent charge made by detractors that all Polish Christians were (or are) incorrigible anti-Semites. Polish Jews, say the nationalists, tended to be sympathetic to the USSR and therefore their loyalty to the Polish state was suspect.

As with any charge made by any group against any other, the idea of generalising is futile. There may have been those who were ideologically sympathetic to Communism and eventually managed to accommodate themselves to the post-war Stalinist regime, while others refused to do so.

The two whose stylish studio portraits are featured above were in the latter category. They both joined the Anders Army, when the so-called ‘Amnesty’ – the agreement between the Polish government-in-exile and the Soviet authorities, following Hitler’s attack on his former ally, the USSR – permitted the formation of Polish forces on Russian soil. Instead of taking the opportunity to remain in what was later to become Israel, as some Jewish soldiers did, while the army was training in the Middle East, they stayed loyal to their army oath and went on to take part in the Italian campaign with the Polish Second Corps.
*
Adam Aston: one of many Polish Jews who fought at Monte Cassino

Adam Aston was one of the most popular artists in Poland between the wars. He was born Adolf Loewinsohn in 1902 in Warsaw. He volunteered to fight in the Polish-Soviet war in 1920. Although he began to study law University in 1923, he gave up his studies after two years to take up a job with a Dutch import firm, meanwhile concentrating on music.

Although he had ambitions to sing in opera, he became a singer, actor, and pianist in the light entertainment mode. He became popular after joining the ensemble called Chór Warsa founded by Henryk Wars. He performed songs in Polish, Hebrew and Yiddish and often worked with Wars at the Morskie Oko cabaret in Warsaw. He also recorded under the names J. Kierski, Adam Wiński and Ben-Lewi, the last of which he used when recording in Hebrew.

According to Wikipedia and the Biblioteka Polskiej Piosenki, he recorded for Syrena Records, Odeon, Parlophone, Columbia and Lonora, singing as many as 960 songs between 1930-1939. He appeared in the film Szyb L-23 of 1932 and also in two musical comedy films: Dwie Joasie and Manewry miłosne in 1935. He was also in Ordynat michorowski in 1937.

He was contracted to sing for Polish Radio and performed at every New Year’s concert. Here he is with the Henryk Wars Orchestra singing a tango with lyrics by Marian Hemar:

After the outbreak of World War II Aston was evacuated with the Polish Radio Orchestra to Lwów which was by that time under Soviet occupation. In late 1941 he joined the Polish II Corps being formed by General Anders and in 1944 fought at the famous and crucial battle of Monte Cassino in Italy. He later joined his friend Wars as part of the Polska Parada cabaret organized by Feliks Konarski (pseudonym Ref-Ren). Konarski, along with composer Alfred Schütz, had written the famous Czerwone maki na Monte Cassino at the site of the battle.

The song was first performed by Gwidon Borucki but it was Aston who first recorded it in Milan in 1946, singing the last verse in Italian. He went on to sing the song in the film Wielka Droga directed by Michał Waszyński and Vittorio Cottafavi in 1946. According to the Biblioteka Polskiej Piosenki, he also appeared in a film with Anna Magnani in 1945 but the film’s title is not specified.

After the war he emigrated to South Africa, where he occasionally performed in a Polish club in Johannesburg and in 1960 he moved to the United Kingdom. In London he took part in the Polish theatre and became a member of the Związek Artystow Scen Polskich, the association of Polish theatre artists. He was awarded several Polish and British medals, among them the Monte Cassino Cross. He died in London in 1993.

Henry Vars: from Warsaw to Hollywood

The career of Henry Vars is truly a remarkable success story. He was born Henryk Warszawski in 1902 in Warsaw into a musical family. His older sister Józefina was a soloist with the Warsaw Opera and later at La Scala, Milan. Paulina, the younger one, was a pianist. Brought up in a patriotic atmosphere, just like Aston, he volunteered to fight in the Polish-Bolshevik war of 1920. He graduated from the Warsaw Conservatory in 1925, was music director for Syrena Records for several years, and gained fame, using the name Henryk Wars, as a composer of popular songs and film scores. He has been described as the ‘pioneer of swing music in Poland’. Wikipedia likens his importance to Polish music to that of Irving Berlin in America. Others compare him to Cole Porter or George Gershwin.

His first film score was composed for Na Sybir (1930). His songs were sung by, among others: Adam Aston, Mieczysław Fogg, Hanka Ordonówna, who had a hit with Miłość ci wszystko wybaczy (featuring lyrics by poet Julian Tuwim and used in the film Szpieg w masce of 1933) and the Lwów comedians Szczepko and Tońko (Henryk Vogelfänger and Kazimierz Wajda). He also collaborated with lyricists Marian Hemar and Emanuel Szlechter. His music is featured in the film Piętro wyżej of 1937. One of Wars’s songs from that time Umówiłem się z nią na dziewiątą was featured decades later in Roman Polanski’s The Pianist.

He was drafted into the army and fought in the September Campaign. Taken prisoner by the Germans, he managed to escape, either from a train, according to one source, r from a prison camp, according to another. He made his way to Soviet-occupied Lwów, where he was lucky to avoid the fate of his one-time musical collaborator Emanuel Szlechter, who died in the Janowska concentration camp. After the German attack on Russia in 1941, when Stalin found that he needed the Polish army as allies instead of enemies, Wars joined the Polish Army which was being formed by General Anders. He travelled through the Middle East and then on to the Italian Campaign with the Polish II Corps, boosting morale as part of the Polska Parada cabaret.

Wars in Tel-Aviv with his wife Elizabeth in 1944
source: Polish Music Newsletter

Wars emigrated to the USA after the war, where he changed his name to Vars and after seven years of unemployment and poverty, he managed to resume his musical career. He struggled to establish himself on the musical scene because he had no recordings of his music available to demonstrate his talents – everything had gone up in flames during the destruction of Warsaw. Nevertheless, he persisted and eventually gained commissions. Over the succeeding years he composed many film and television scores, including the family TV serials Flipper and Daktari. His songs were sung by many performers who included Margaret Whiting singing “Over and Over and Over” ( a version of which was recorded by Polish singer Anna German), Bing Crosby, Doris Day, Brenda Lee and Dinah Shore. According to the Nowy Dziennik, he lived in style in Hollywood where one of his neighbours was the film star Gregory Peck. Vars died in California in 1977.

sources: Film Polski Filmography of Wars http://www.filmpolski.pl/fp/index.php?osoba=117487
Nowy Dziennik: Henryk Wars- Ukochany kompozytor Warszawy
Polish Music Journal: The Film Scores of Henry Vars in the United States by Linda Schubert
Wikipedia
*
Aston and Vars in the RFE archives:
http://www.polskieradio.pl/68/787/Tag/58902
http://www.polskieradio.pl/68/787/Tag/68884
The following clip of Vars and his orchestra with vocals by Adam Aston features photos of an elegant pre-war Warsaw:
https://www.youtube.com/watch?v=rcQp0NdtexM
The Anders Army is the subject of a new book by Norman Davies
Posted by D Goska at 9:21 AM