Thank You to the Jew Who Saved My Mother's Life 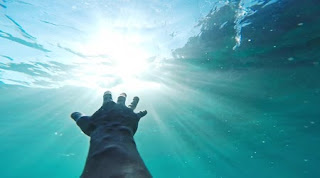 My mother, Pavlina, Pauline, told a lot of stories, and she told them well.

I never had kids. I have no one to pass the stories on to.

Now that my sister Antoinette is gone, I don't even have anyone to share the stories with. Not even so much as three-word allusion, which used to be a mainstay of my everyday speech -- "Remember that time ..." -- would be understood any more by anyone. My language is an amputated stump.

It's a desolate feeling: being a repository of stories that will never again be told.

My mother grew up in Kovarce, Slovakia. One day she was near the River Nitra. She saw some children swimming. Swimming looked like a pleasant and fun activity and so she decided to join them. It did not occur to her that she didn't actually know how to swim. She began to drown.

Life and death. Side by side.

But my mother didn't drown in the Nitra. One of the children, her neighbor, saved her life.

My mother and I returned to her village, the paradise she was forced to leave when she was eight years old, in the 1970s.

In the intervening decades, in spite of herself, she had become American. Some things about her village disappointed her. She didn't like the green bottle flies clinging to the lace curtains of the village cottages. She didn't like outhouses. She really didn't, as it turned out, like Soviet communism any more than she liked American capitalism.

The River Nitra, fifty years older than when she left, was a disappointment. She remembered a clear, wild river. What we saw was an agricultural canal skulking desultorily through a tamed channel.

My mother told me that the village boy who had saved her life was killed by the Nazis.He was a Jew.

I have to repeat this password several times a week. Every time I do so, I summon up all the facts I remember about him. When I need to change the password, I summon up and re-juggle, again, everything I know about him.

It is how I honor him. This is a small thing. I keep his memory alive by encoding him into a frequently used password.

Recently some thugs burned a Jew in effigy in Wroclaw. In this blog post here I describe how I decided to dedicate my next ten blog posts to Polish Jews. I am cheating today. I'm talking about a Slovak Jew. The Jew who saved my mother's life when she was young.

I don't know his name.

As I was thinking about this blog post, I zoomed forward in time from whispered, oral stories told half in English and half in Slovak decades ago, stories taking place in an agrarian village without electricity or running water and haunted by hasterman – water sprites – to the 21st century.

I suddenly realized that my awareness of this young man need not be limited to my slim and fading memory of my mother's words. I can go to the internet. I did. I found the Yad Vashem page dedicated to Jews from Kovarce killed by the Nazis. It's here. I decided to read down the list of names and dates of birth to find a male who was around my mother's age. A few are possible candidates – Jozef, Aladar, Alexander.

Whichever one of you saved my mother, thank you.

I'm sorry we could not save you.

Here's a fabulous piece of music about a river in Czechoslovakia