Sexy Nazis and Brute Polaks: Having Our Ethical Cake and Eating It, Too 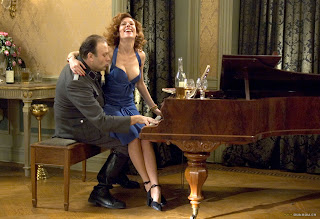 This is all very pertinent to "Bieganski," the brute Polak stereotype.

These films are doing hard cultural work. Sexy Nazis reassure viewers that we can have our cake and eat it, too. We can enjoy our attraction to squeaky leather boots, riding crops, engraved daggers and masterful warriors. Enjoying all the paraphernalia of power need not compromise us ethically. We are shocked, shocked at the Holocaust. We don't much like those dirty, primitive, Catholic, Polaks. 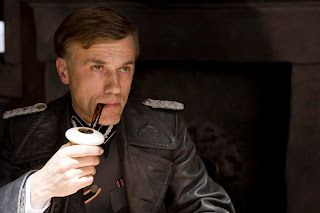 "Bieganski" shows how a deep-rooted stereotype of Poles and other Eastern European, peasant- and Christian-descent populations is currently deployed in scholarly, journalistic, and popular prose devoted to the Holocaust, and, by extension, to all hate.

Not only are Polish Catholic peasants the world's worst anti-Semites, essentially and ineradicably responsible for the Holocaust in a way that Germans are not seen to be. Indeed, Sexy Nazi films are just the popular culture extension of trends taking place in the Ivory Tower. Nowadays, Bieganski, or the brute Polak, is humanity's representational hater.

In Willard Gaylin's 2004 book "Hatred: The Psychological Descent Into Violence," Gaylin attempts to illustrate human hatred for his reader. Gaylin does not turn to Al Qaeda terrorists, who had attacked the US just a few short years before, committing one of the most visually spectacular displays of hatred humanity had ever seen, and inaugurating the War on Terror. He doesn't turn to German Nazis as the epitome of hate. Rather, to illustrate pure hatred for his reader, to, as Gaylin puts it, engage in the courageous task of "confronting evil head-on," Gaylin turns to Poles, specifically Polish, Catholic peasants. They hold the key to understanding evil.

At the same time that an inescapably tainted Polish essence is positioned as responsible for the Holocaust, and hate itself, Germans, including German Nazis, are inched away from guilt. In a recent scholarly book that uses a fictional short story to depict Polish rescuers as sex deviants who help Jews in order to exploit them sexually, one can read a Jewish survivor state, "Not one German ever laid a finger on me … What I do hate is Ukrainians and Poles."

It's easier to hate Poles, "Bieganski" shows, exactly because of the distance between the stereotypical image of the dirty, laboring peasant, excessively religious, clinging, as Andrei Codrescu put it on NPR, to his "smoke darkened icons" and his "stink," and the modern, educated, secular person. It's difficult to accept that people who are human in the exact same way that we are human commit atrocities. It's difficult to confront the fact that we humans are attracted to power, and that Nazis, if nothing else, were very powerful. The Brute Polak image solves this problem for the contemporary Holocaust audience.

It's easier to locate evil in someone seen as utterly different from oneself, and utterly different from that which naturally attracts us. That is the reason that every ethical person, not just Poles, should care about the Bieganski stereotype. Indeed, prominent Polish Jews, including Adam Michnik, exactly on this ground of ethics and the manipulation of guilt by power groups, have spoken out against the stereotyping of Poles in the West.

"The Reader." You really can't get a grip on the Holocaust until you've had a gynecologist's eye view of Kate Winslet's privates.

"Black Book." If you like seeing beautiful young women completely naked, and posed in compromising and perverse scenarios, then "Black Book" is for you.

Carice van Houten as Rachel, a Jew who falls in love with a Gestapo chief, is fully exposed on screen, and things are done to her body that I've not only not seen in movies before, I didn't think I'd ever see.

"Inglorious Basterds." As "Bieganski" records, female fans of this film decided that Christoph Waltz, as SS Colonel Hans Landa, aka "The Jew Hunter," was the sexiest thing they'd ever seen.

"Island at War." The youtube romantic tribute videos to Baron von Rheingarten, this series' sexy Nazi, are something to see. Being a mass murderer is no impediment to being a sex symbol to the discriminating BBC or PBS viewer!

"Lust Caution" "Lust Caution" has chosen a monster for its lead. In bed, though, this torturer is one of the world's great lovers. His masterful feats of lovemaking are so acrobatic you'll not be sure if you're viewing a page from the Kama Sutra or a metaphor invoking ramen noodles.

This is all very pertinent to "Bieganski."
Posted by D Goska at 8:47 AM