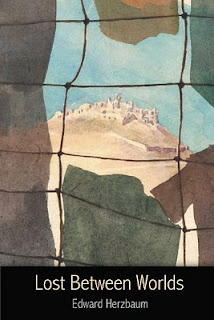 "Lost Between Worlds" offers an in-your-face experience of World War Two, Nazis, Soviets, the Holocaust, the mass deportation of Poles to Siberian Gulags, Polish-Jewish relations, combat, torture, and simple human misery. The book's great strength is this: it is an unedited diary, kept on site – in Poland, Russia, Iran, Israel, Monte Cassino – and in real time. It's as if you are reading the blog entries of an average guy whose life keeps thrusting him to the forefront of historical events. You won't learn Churchill's inner thoughts. You'll learn how it feels to be a teenager who is suddenly hunted by Nazis. Nothing comes between the reader and Edward Herzbaum's pain as he is tortured, his contentment when he finally finds enough to eat, his melancholy as he confronts how completely his previously normal life has been ripped from under his feet. 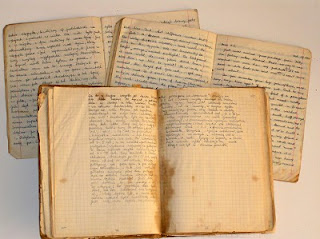 The original journals of "Lost Between Worlds" source

I've read many Holocaust memoirs; this book is unlike others. It took historians, journalists, professors and memoirists a long time to hammer Holocaust and World War Two history into a canon. Herzbaum's eyewitness accounts are not massaged or mediated. There is a passage, pages 41-55, that teachers should use to teach the truth of the Soviet camps. Herzbaum makes no attempt to hide that he is overwhelmed at being slowly snuffed out. Soviet camp life is designed to wring labor from prisoners while working them to death. Even the boards used as beds are a menace; bedbugs sift down from them, and they sometimes crash, crushing prisoners underneath.

A prisoner manages to hoard enough food to overeat, defecates on himself, is kicked out into the snow, and, whimpering, dies from the food his starving body can't digest. Snow sifts down on his corpse. Flowers, a local reports, used to sport lively colors, but have turned pale from fear of the Soviet secret police. Herzbaum describes the camp in architectural detail, as if he were a town planner, while also conveying how unbearably hungry, hurt, and ready for death he is. Had Herzbaum edited this passage decades after writing it, in order to prepare it for publication, I'm sure he would have combed out his own wrenching sense of helpless victimization. But these words were written as the events described were experienced, or not long after, and this raw writing creates the sensation that you are hearing the terrified voice of a tiny insect with a giant human heel coming down on it.

War is nothing if not absurd, and "Lost Between Worlds" conveys war's absurdity with crystalline brilliance. Herzbaum's twisting fate is too Byzantine, and always too close to headline news, to make a believable fictional plot. He was a prisoner of the Nazis, and escaped. We know, in hindsight, what he escaped – Herzbaum was Jewish. Herzbaum didn't know what we now know, though. He was a teenager who made a lucky break, and went off to flirt with Wanda, a Polish girl who loved him, and to go swimming, before being captured by the Soviets. Between the Gulag and the epic and bloody battle of Monte Cassino, Herzbaum has time to watch and review Disney's "Fantasia."

Herzbaum is a natural writer. He sees with clarity and passion and feels that need that real writers feel to communicate with an audience. He has his readers by the lapels and won't let us go till he has told his tale. He describes Soviets torturing him with a lit cigarette (pages 26-7) with the same immediacy that he describes the beauty of a Central Asian evening (119):

"There is a bright moon and some wind. As we stop for a few moments, the exotic landscape is striking, like an intoxicating scent. The tall poplars wave and rustle; the clay walls of the hovels are lit up brilliantly by the moon and the small windows look completely black. Under some trees somebody is laughing or talking in a gentle voice and then there is silence again, but it is full of life. Everything which is dead in the heat of the day is now awake, a life so lush and vibrant that it is difficult to describe. There is also the wind, hungry and restless like a young animal, coming down from the mountains and blowing above the fertile, fragrant valley. It runs amok and then it's silent again."

Herzbaum reports what it is like to be shelled, to be shot, to come across a corpse with no face. He reports what it is like, as a Gulag prisoner, to watch a female prisoner, unaware of his presence, strip and bathe on the opposite bank. He expresses disdain for Italian prostitutes, and their pimps, their own little brothers. He mentions Wanda three times in the book, enough to get a sense of Wanda's love for him. 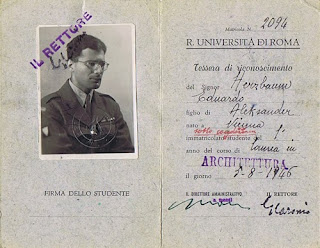 "Lost Between Worlds" is as remarkable for what it doesn't say or do as for what it does. Herzbaum does discuss his Jewishness, once, briefly, with a Nazi captain (17). This Nazi is friendly and helpful to Herzbaum. The only time Herzbaum's Jewishness comes up in conversations with his fellow Polish exiles and soldiers it is to deny him a pass on Christmas, because Catholic soldiers have priority for passes on that day (133). Herzbaum eventually does get the pass. He describes his emotional response to hearing a pianist play Chopin (124), but, otherwise, Herzbaum barely mentions being Jewish or Polish. Identity politics appear to matter little to Herzbaum. It's unfortunate that they mattered so much to the monsters who gave us World War Two. What matters to Herzbaum is his identity as a 19-year-old (in 1939, when war breaks out) and, when the war ends, a man in his mid-20s. His youth has been stolen. Herzbaum cares about beauty. He cares about the color of the mountain ranges that are arrayed from his sentry post, one after another, far into the distance, into China.

I came away not only loving this book, but loving its author.
Posted by D Goska at 3:44 PM