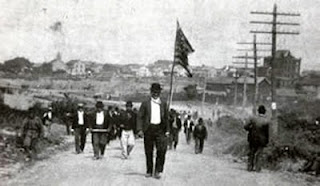 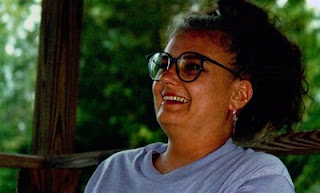 In 1897, in Hazleton, Pennsylvania, striking Bohunk and German coal miners were killed in what has become known as the Lattimer Massacre.

In 1914, in Ludlow, Colorado, coal miners, many immigrants from Southern and Eastern Europe, were massacred.

In 1927 striking coal miners were attacked with machine guns in Columbine, Colorado. Flaming Mika, a Croatian teenager, was a strike leader.

It's interesting to read web-based commemorations of these events, and others like them. Many such webpages are maintained by leftists.

I salute leftists for working to keep alive history that is otherwise buried and ignored. I ask, semester after semester, if any of my students are aware of this history. They are not. When I tell them that American troops fired on American workers, their jaws drop and their eyes get large.

Unfortunately, though, the leftists who commemorate these events often work hard to obscure the ethnic identity of the striking workers. Those who struck, who lead the strikes, who were shot, who were wounded and killed, are all "workers."

Leftists, for their own ideological reasons, often work to obscure this historical reality: "white" Bohunks were identified by contemporary science as racially inferior. (In the same way, the Soviet Union, when it had control of Auschwitz, identified the bulk of its victims, not as Jews, but as "enemies of fascism." You'd never know, from many Soviet treatments of the Holocaust, that the Nazis had an agenda of scientific racism. In its heyday, scientific racism was embraced by the left as well as the right.)

The scientific racism, widely accepted one hundred years ago, that identified Bohunks as racial inferiors, certainly informed those who abused them in the workplace, and shot, and killed them when they asked for better work conditions.

In describing the murderous suppression Andrew Carnegie and his fellow industrialist, Henry Clay Frick, visited on strikers, Carnegie's biographer wrote, "Frick had ... been unfortunate in the type of workmen with whom he had previously dealt. The Hungarians, Slavs, and Southern Europeans of Connellsville were a savage and undisciplined horde, with whom strong-arm methods seemed at times indispensable."

Me? I'd never heard of the Lead Belt Riot until poet Christina Pacosz introduced me to it. And I study this stuff. Amazing how busy and effective those who erase history can be.

In her essay, "A Great Deal of Doing: The Missouri Leadbelt Riot of 1917," poet Christina Pacosz describes the riot that drove her Polish father, and others like him, out of the lead-mining region of Missouri.

Poles and other Bohunks arrived in Missouri to mine lead. Lead was needed for World War I. The locals did not like the "noisy and aggressive Hunkie," as Missouri's state historian described them. And, so, the locals rose up and drove the Bohunks out, including Pacosz's father, who

"vividly remembered mattresses stuffed into windows, all the children huddling in a dark, stuffy room. The emotional trauma of a small, scared boy is what my father recounted on those muggy, mosquito-filled summer nights we rocked together on our front porch in Detroit's Polish ghetto."

Pacosz's recounting of this forgotten history is priceless. Her Beat-inspired prose is grittily beautiful and yet highly detailed. This is poetry, and this is history.

Pacosz is not just a poet, not just an historian. She is also, unavoidably, a moralist. Given the skill of her pen, Pacosz is potentially a hanging judge – at least metaphorically. Should the modern-day descendents of those who terrorized, dispossessed and exiled her Polish immigrant father and grandfather be condemned? "I wonder if these people had any relatives who wore white sheets and terrorized my father?" she asks.

Pacosz's generosity is as abundant as her talent. Her rich heart and insight into the multifarious causes of ethnic violence that pits one worker against another inspire her to conclude, "There is no one here I can be angry with." 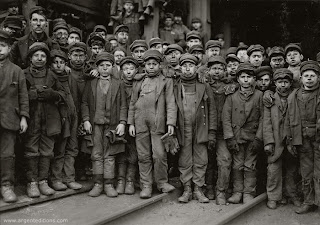 Lewis Hine. Breaker Boys. My father could have been in this photo.
Source.

My angry words here are all mine, and they are not related to Ms. Pacosz's generous essay.

I'm angry at modern day, politically correct Missourians who piously adopt the same lies that their racist ancestors adopted to lynch my people. Nowadays their ropes are words.

Poles were brutes to the Missourians of the Lead Belt Riot who drove us out with violence and hate. Poles deserved to be violently driven out of their homes, driven out with "guns, knives, and hatchets," because they were "noisy and aggressive."

That racism, over one hundred years old, is not dead.

To the elite, Poles are still brutes, and they still deserve to be blamed and scapegoated and treated as inferior. Books like Tammeus' lynch with words.

Again, the anger here is all mine, and is not related to Christina Pacosz's essay.

Please acquire and read Christina Pacosz's essay. Nothing else I've read about Poles in America could take its place.

"A Great Deal of Doing: The Missouri Leadbelt Riot of 1917."

Here is poet John Guzlowski's blog post on Christina Pacosz's book "This Is Not a Place to Sing."