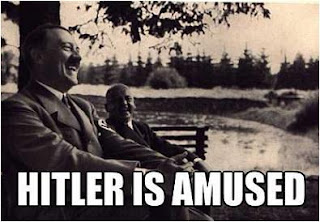 Much ink has been spilled addressing the question of whether or not one could make mainstream comedy out of Adolf Hitler.

Ernst Lubitsch made the 1942 Jack Benny / Carole Lombard comedy "To Be or Not to Be." It was set in Nazi-occupied Poland. For me it falls flat.

Mel Brooks remade the film in 1983. I have not seen the remake.

I've never seen any version of "The Producers," although I have watched "Springtime for Hitler" on youtube. Struck me as a very high price for a subpar cute comedy routine.

The "Hitler finds out" youtube meme of "Downfall" parodies does make me laugh. A lot. You can see several here.

Netflix is marketing a new German TV series called "Look Who's Back." I watched scenes on youtube. They involved a cute young millennial trying to teach a grouchy Fuhrer how to use a computer and discovering that the name "Adolf Hitler" is already taken.

If they depicted Hitler accurately, his evil would banish all humor. If they soften him to sell their joke, they violate truth.

Not.
Otto, author of "Ripples of Sin," and the son of a Nazi, wrote this:

It's sad they don't understand it will never be okay to joke about this.

Not many jokes about massacres of American Indians. I think it's an attempt to slough off a bit of the horror so the next generation can go into "It was bad, but was it really that bad?" mode, and eventually it will be the same dialogue as the Japanese and the Italians do with their war records. Or the collaborators. That is deflecting as much association with what happened.

In some future I can see a show that has the viewpoint it was Poland's fault it all came about. But it will all be in good fun.

***
Re, the above meme. I did a Google image search of "Hitler not funny." I found many "funny memes" like "Jew mad? Because I did Nazi it coming." Hardy har har. Not.

You can watch the scenes here
Posted by D Goska at 2:52 PM