The Tim Burton School of Polish-Jewish Relations. By a Guest Author. 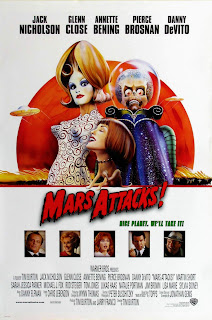 Since Danusha's accident will make it hard for her to post for the next little while, Don Freidkin has kindly offered the following guest blog entry.

Don Freidkin is a Texan of Russian- and Georgian-Jewish descent. His great-grandparents migrated from the Black Sea to Anniston, Alabama. His extended family includes director William Friedkin and character actor Joel Friedkin.

Don Freidkin is a writer, producer, and director. He has taught at the University of the Incarnate Word in San Antonio, and has managed two Webby award-winning online communities.

Freidkin has been generously and enthusiastically boosting his friend Danusha Goska's writing for over fifteen years. Freidkin's contribution to Bieganski the Blog is below.

I am a huge fan of film director Tim Burton. In his 1996 film "Mars Attacks!", Burton created an homage to 1950s science-fiction films. In "Mars Attacks!", President James Dale (Jack Nicholson) makes a moving speech to the Martian ambassador after the invading Martians have destroyed much of human civilization. Nicholson is so impassioned that when he utters the cliché line, "Can't we all just get along?" it seems fresh and new, and moves even the tearful Martian ambassador to offer his hand in friendship.

Except that Burton will not let the screenplay get away with that, so the Martian ambassador's hand turns out to be a murder device that stabs the president through the back.

Burton, the cynical director who manages to force fantasy and reality into an uneasy marriage that somehow works at least until the end credits, may well be right most of the time. But now and again, we humans manage to rise above the muck in which we prefer to wallow, and to do something magnificent.

Now and again has rolled around yet once more, and if we need a clue how to behave, I suggest the text from Matthew 8:22: "let the dead bury their dead."

What's done is done, and short of taking care never again to allow any of that to happen, let's just, as a species, unilaterally declare that enough is enough, the past is gone, and nothing we can do will change that.

So, "let the dead bury their dead."

Eleven million corpses – Jews, Gypsies, communists, dissidents, Eastern European partisans – are quite enough, thank you. They make that which was once human beings with hopes, dreams, aspirations, hungers, loves and hates, a great reeking pile of meat rotting in the sun, because we will not let them be buried.

And the stench of history is warping our perceptions of who we are and who we could be, so the world we could make for one another to live in with love and joy recedes even further as we become more like the Nazis we loathe and fear.

And the answer, I think, is simplicity itself: "let the dead bury their dead."

Those who know me will be surprised – appalled, perhaps – to see me quoting scripture like some West Texas Bible thumper, but having done it once to bolster my case, I'll do it again; this time Romans 12:19. The apostle Paul, quoting Deuteronomy 32:35, says, "for it is written, Vengeance is mine; I will repay, said the Lord."

So what it boils down to is that whatever wrongs may have been done, whatever evil people have visited upon their fellow humans, our only business is to do our best to avoid a repeat performance, especially if we ourselves are in danger of becoming the performers, and let God take care of the rest.

I don't have a direct line to the mind of God, and in fact, I'm none too sure whether there's anyone on the other end of that line, but I'm tired of waiting on God, and I suggest we take it upon ourselves to leave the dirty work to the Lord, who seems to want it, and get on with building a paradise here for all of us.

Building paradise is not only within our grasp, it is in our job description.

So in answer to Burton's question, "Can't we all just get along?" I say, "Damned straight we can."

Enough is enough. Let's just do it.

The "Mars Attacks!" scene Don mentions is very good and can be seen here.
Posted by D Goska at 11:30 AM