Ostarbeiter, Slavic and Other Eastern European Slave Laborers under Nazism, in a New Book 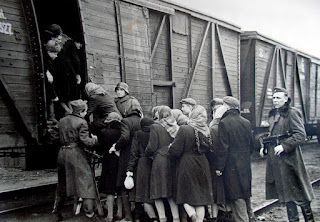 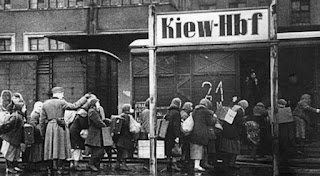 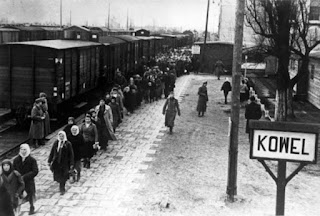 " OST: Letters, Memoirs and Stories from Ostarbeiter in Nazi Germany" is a new book about Ostarbeiter, Slavic and other Eastern European slave laborers under Nazism. Estimates of the number of Ostarbeiter number between 3 and 5.5 million.
Ostarbeiters were sometimes recruited through propaganda, and more often rounded up by force. They were transported in cattle cars, stripped naked, inspected by Germans for lice, and then put to work, for long hours and fed only starvation rations.

The November 18, 2021 Telegraph features an article about the new book. You can read the entire article here.

Ostarbeiter had to wear an identifying patch:

"We didn’t know where they were taking us. We were unloaded in the drizzling rain and organised into columns in silence. They escorted us with dogs to a building where we found others like ourselves. Everybody was given a coloured patch to attach to the left-hand side of their chest, either red, yellow, green or blue. We were given yellow patches, which assigned us to the distribution camp."

Some were assigned to concentration camps:

"The camps here were large, and surrounded by barbed wire. […] There were barracks with stacks of greatcoats heaped outside that had belonged to our deceased prisoners-of-war. There was no lavatory; just a hole under one of the watchtowers. And you were expected to use this hole in full sight of the guard, who might just take a pot shot at it for fun, to watch you get splattered with excrement."

They were sold to employers at slave auctions:

"Representatives from a firm or enterprise would come and – for a fee – choose workers. They were generally most interested in the candidates’ physical conditions; many of the Ostarbeiter were too young to have professional qualifications and, in most cases, their education had been rudimentary.

They looked at us to see whether we were in good physical health, and then checked whether our arms and legs functioned properly. For the factory where I worked, they chose young, agile people of a light build. […] The bigger, stronger, fitter ones were assigned to heavy manual labour.

And Anna Sechkina (from Volodarskoye, Russian SFSR) recalls that “not everybody was selected – the elderly, and children younger than 10, were rejected. The managers said that feeding them would be a waste of bread.”

For many, the selection process was redolent of a slave market, where labour was purchased and sold. Lev Tokarev (from Peterhof, Russian SFSR) was deported in 1942. He says:

When we were taken to the labour exchange, everybody was chosen, but nobody took me. I was scrawny, and was left standing on my own. "

Germany looked like paradise to these young people from Poland and Ukraine:

"“There were flowers on the balconies and all along the sides of the roads. It was beautiful – I had never seen anything like it! We had flowers, but not in such abundance.”

“Even the people at the railway station looked to me as though they had just stepped off the pages of a fashion magazine. It was a different world.”

“I tell you, Germany must have been created as a paradise. […] Everything was clean, beautiful and tidy.”

"The Germans would line the streets when we were being escorted back from work. Each would stand on his own doorstep, and the children would fire little stones at us from their catapults. The Germans would laugh when one found a target."