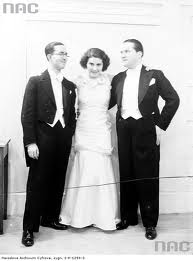 "What's in a name?" asks Juliet in Shakespeare's famous play. The answer must be: "much more than one would at first suppose, my lovely innocent idealist." Just as a picture is said to be worth a thousand words, so a single name, whether it be first name or last name, will usually conjure up many associations. In the case of citizens of Poland, names can often lead to hasty generalisations, if not to immediate and frequently damning judgements.

The trio pictured above, as any sharp-eyed reader who is familiar with pre-war Polish radio will know, is not that of Goldstein, Merkel and Biegański, but they could quite easily have been. Radio and theatre and the arts in general were the milieus in inter-war Poland where ethnic prejudices were for the most part quite irrelevant and where regional and ethnic variety only enriched the sum total of Polish cultural life. One has only to think of the Yiddish humour of the szmonces written by people such as Marian Hemar and broadcast by Lwów radio station "Lwowska Fala". Piłsudski himself was said to have been a big fan of the station's brand of humour.

That Jews were often involved in theatrical life is reflected in Jack Benny's 1942 film "To Be or Not To Be" – a release quite daring in its day, because the outcome of the war was by no means a foregone conclusion – and which was successfully remade by Mel Brooks in the eighties. Although my own opinion is that this is a pro-Polish film – in both original and remake – since its Polish protagonists are presented in a sympathetic light, nevertheless there has been criticism which pointed out that the Polish foreign office officials are portrayed as cravenly wanting to appease Germany by refusing to sanction an anti-Nazi satire in a Warsaw theatre.

There is some justice in this criticism, but if films were permitted footnotes, then a little bit of extra information would reveal that the Polish government was indeed under pressure from its western Allies who insisted that Poland should avoid doing anything which would antagonize Hitler. The people exerting this pressure on Poland have largely managed to distance themselves from this uncomfortable truth and Poland's belated mobilization in the face of the German assault has often been characterized as the result of governmental chaos alone, with no diplomatic input from Whitehall or the Quai d'Orsay.

As for the name Goldstein, many readers will know that the name was chosen not so long ago by German broadcaster ZDF for one of the five protagonists of its controversial TV series "Generation War" ("Our Mothers, Our Fathers"). I reviewed it at the Krakow Post.

It might seem churlish to suggest that ZDF could have been a bit more creative in its choice of names for its Jewish character. Then again, the same comment could be made about the name Kowalski as used by Tennessee Williams. "What's in a name?" asks Juliet. "A quick and handy shortcut, my beloved," Romeo might well have replied, "to an entire nation".

The second name in the list above is, of course, immediately associated with that of the current German chancellor. As an aside, it might be of interest to know that Angela Merkel has recently discovered that there was a Polish connection in her family, but the clearly German name Merkel in the title of this piece belongs to a Polish citizen, quite possibly of German descent, but no less patriotic for being so.

It need hardly be stressed that not all Polish nationals who bore German surnames were either Volksdeutsche or at least suspect in their allegiance to the state – one has only to think of army heroes such as Anders or Fieldorf – just as not all Poles who bore clearly Jewish surnames were Bolshevik fifth columnists or those with Ukrainian or Lithuanian surnames would have been happy to see the demise of the Polish Republic. Unfortunately stereotypes persist to this day.

The mention of stereotype brings me neatly to the third in the trio: that of Biegański, the name chosen by William Styron for his repellent, German-sympathizing, extreme nationalist character who is the father of Sophie in "Sophie's Choice" and who also gives his name to the blog you are reading and the book by Danusha Goska about stereotypes. Nowadays a rather classless ethnically Polish surname, it has no particular connotations of either aristocracy nor does it suggest any rural provenance; if anything, it is probably associated with the szlachta, the minor nobility of Poland.

I should now elaborate not only on my choice of illustration above but I should also offer an explanation for the choice of the three names in the title. May I say that since I have no photos of the trio of Goldstein, Merkel and Biegański – who were real people and all Polish citizens – I chose instead to show a photo of Alfred Schütz (composer of the famous Czerwone maki na Monte Cassino), Włada Majewska and Wiktor Budzyński, who were performers at the hugely popular above-mentioned radio station "Lwowska Fala". They are pictured here in Kraków in 1936.

And, you may ask, what about the names in the title? Anyone who has read my previous columns will not be surprised at the revelation that the names Goldstein, Merkel and Biegański – quite clearly not chosen at random – belong to Poles who were victims of the Second World War.

Would the three have known each other before the war? Possibly. They might have been a firm of lawyers, for instance, in Warsaw or in Kraków's Kazimierz district. Would they have socialized before the war? Again, quite possibly. Warsaw and Kraków and other cities were cosmopolitan centres. Contrary to the picture suggested by works such as Lanzmann's epic "Shoah", Poland was not exclusively mired in medieval ignorance and superstition or totally in thrall to backward clerics. It was precisely the cosmopolitan and progressive elements which were targeted for elimination by both Nazis and Soviets when they partitioned the country between them. Goldstein, Merkel and Biegański, citizens and patriots, might have been names found on the lists of victims of Auschwitz or Majdanek or any other of the death camps constructed by the Third Reich on Polish soil.

Instead, Second Lieutenant Salomon Goldstein, reserve officer Zygmunt Merkel, and Lieutenant Tadeusz Biegański were just three individuals among the thousands of Polish army officers who were murdered by Stalin's NKVD at the killing grounds of Katyń.


Farewell and rest in peace, Goldstein, Merkel, and Bieganski, martyred soldiers and representatives of a vanished world, and to borrow from Horatio in Shakespeare's Hamlet, may flights of angels sing you to your rest.
Posted by D Goska at 12:25 PM