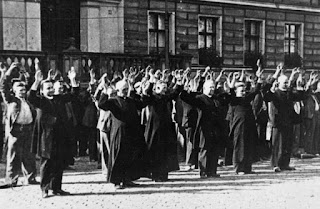 I came across the photo, above, in a Wikipedia article on Persecution of the Catholic Church in Poland. You can visit that page here.

I saw no support on the page for this caption. Wikipedia cited a source, Okupacja hitlerowska na Pomorzu Gdańskim w Latach 1939-1945, but I knew that getting a copy of that book might take a while.

One must be wary of information on the internet. Through Facebook I have seen evidence of how gullible people can be. People circulate Barack Obama's Columbia ID card that identifies him as a foreign-born student, evidence that George Bush planned 9-11, and advice to keep a cut onion in your house to make you immune to influenza. It saddens me to witness people displaying their credulity and lack of critical thinking in response to these false memes. 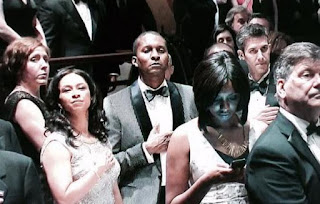 The other day the above photo came through my facebook feed. The poster said it showed Michelle Obama texting during the national anthem. It's clearly not a photograph of Michelle Obama.

I wanted to know if the above Bydgoszcz photo and its caption were authentic.

I sent the photo to the United States Holocaust Memorial Museum. Their researchers have been very helpful to me. They were again. They wrote back, "We do not have the exact copy in our catalog, however we do have an alternate angle, see attached. We also have other photographs of clergy from the Krone Prison. Please e-mail if you would like to receive reference copies."

Below please find the photo and the text that the USHMM sent me: 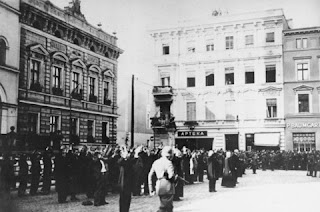 This image is for reference purposes only!

Polish clergy and prominent citizens arrested by members of Einsatzgruppe IV, police, and German soldiers are held hostage on the Bydgoszcz market square. Just after the beginning of the German-Polish war on 3 September 1939, armed groups of ethnic Germans in the city of Bydgoszcz staged an uprising against the local Polish garrison. This was put down by the next day, one day prior to the entrance of German troops in the city on 5 September.

A local command structure was quickly put into place by Major General Walter Braemer, and in response to continued attacks upon German personnel in the city, severely repressive measures were instituted in the following days.

Assisted by Military Field Police Section 581, Einsatzgruppe IV under the command of SS-Brigadefuehrer Lothar Beutel, and the 6th Motorized Police Battalion, Braemer's troops assembled hundreds of hostages and executed hundreds more at various locations in and around the city, including the Bydgoszcz market square.

As a result of these actions, at least 500 Polish civilians, many of whom were members of the local intelligentsia and clergy, were shot and over 1,000 more incarcerated between 6 and 11 September. On 11 September, Braemer moved his headquarters out of Bydgoszcz, placing Police Colonel Goesch, SS-Brigadefuehrer Henze, and Lothar Beutel in command. These men continued to order the execution of hostages, particularly of members of the intelligentsia and clergy, in accordance with instructions given by Heydrich and Himmler for the 'political housecleaning' of Poland.