A Polish Near Death Experience 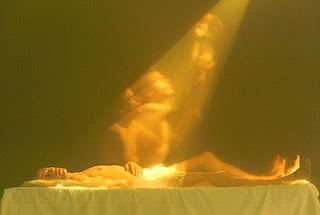 Artist's illustration of near death experience.


Near Death Experiences are experiences reported by a minority of people who have clinically died, or come close to clinical death, and been revived. These experiences typically involve a sense of the spirit leaving the body, the experiencer observing his own body, seeing a radiant and loving light, being drawn toward that light, often through a tunnel, being greeted by deceased relatives, reaching a barrier of some kind, and deciding to return to the physical body.

Dr. Raymond A. Moody, Jr coined the term "near death experience" and he's probably the most famous author to address the topic.

There are many books and websites devoted to near death experiences. Just a few:

I've read dozens of these accounts. They all contain some similar features. I read one recently that was quite different from any others I'd ever read. The experiencer didn't see a light, was not greeted by relatives, and did not reach a barrier. Rather, the experiencer's experience was all about … Poland!

Excerpts from this near death experience, below, with a link to the full experience.

The NDE happened when I was on the operating table at St. Vincent's Hospital in Lower Manhattan. I remember being put under and asked to count backwards from 100. I know that I counted down to 96 and that the world for me went black. The next thing that I remember is being very happy and very safe. I was in a place that I loved with all of my heart.

I was in my spirit in the Polish countryside and I could almost see the fields during the summer just waiting to be harvested. It was a warm summer day, not hot and humid the way that NYC can be, but warm, sunny and dry. I was above the fields and I admired them but could not focus my eyes completely on them. I wanted to see what kind of crops were growing, but again my eyes could not focus that well. I saw a little mound of brown earth and then behind it I saw a field of wheat. I saw green individual plants in another field, but I could not make out what kind of plant it was, but I did notice that the earth was very rich and could give birth to many good crops. The little green plants seemed to be happy growing in the rich earth and being warmed in the sun.

There was a kind of sunshine that one finds in Northern Europe during the summer. The light is less direct because it is in the north, and it is more at an angle then the sunshine in NYC during the summer. The sun therefore is less harsh and much more warming, then heating. I imagined that I was one of the little green plants and that I was also planted in the earth of my country and warmed in its northern sunshine. I tried to see down the fields if there were houses, but all I saw was a shack that was falling down.

There were no modern houses, so I decided to sit in the shade of the shack for a few minutes. Then I rose above the shack and saw the golden light from the wheat being reflected back to sun. This time, I could see the individual wheat plants in detail and at a distance of three feet. I could not believe that such wonderful colors could be found in a wheat plant and to have that golden yellow reflect the sun was just beautiful to see. I was above the shack and I looked at the wheat field all golden in the sun. One could see for kilometers and all there was blue sky of a summer day. At a distance I saw the blue cloudless sky with birds flying around and chasing each other, I was jealous that the birds could stay home in Poland and enjoy flying around in the sunshine.

I saw some trees that must have the border of the property. The trees were tall and they were full of dark green leaves. Each of them formed a kind of leafy egg shaped green on top of a stem and some were closer to each other, but I noticed the one tree that was away from the others in particular. It was a mature tree, with large green leaves. I looked at that tree and I said to myself how lucky this tree really is, because it got to stay home and never was forced to leave Poland. The tree was never uprooted, and I wondered what it like to be a human being that was never uprooted. I rose further up above the field and saw that the trees were going away from me. I knew that it was time and that something had to stop this experience, I just panicked because I had to go back to where I really was.

After being back in my body I heard the doctors screaming "she has stopped breathing" and something like "we are losing her." There was general panic in the operating room and could feel the stress of the nurses and doctors. They were shaking me and calling my name to wake me up. I did come back fully then and I was back on the operating table in my body at St. Vincent's Hospital in NYC. I was devastated because when I was outside of my body and in the Polish countryside, I was perfectly centered and I knew who I was and what I was capable of doing in life. Nothing could have stopped me from being the kind of human being that I was meant to be, because I was that human being already within myself flying over the July fields of Poland.

Important note: I have now lived for the past six years on the edge of a Polish village, 45 km west of Warsaw and I get to see the countryside during all the seasons. But during the summer it is the most beautiful. I walk on a dirt road along the fields with my dogs and I sometimes stop to admire the views of the crops that run from end to end of each field.

The full text of Mira's account can be found here.
Posted by D Goska at 8:00 AM