Roman Turski in "Secrets and Spies" 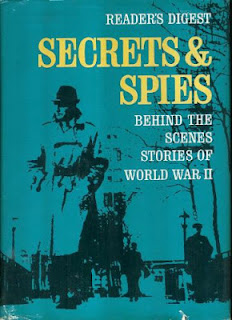 Otto Gross came across the excerpt, below, in the 1964 Reader's Digest book "Secrets and Spies: Behind the Scenes Stories of World War II."

Does anyone know anything more about this story, or the man, Roman Turski, telling it?

Thank you very much to Otto for bringing this otherwise obscure story to our attention. Otto's previous blog posts are here and here.

I was born in Poland, where before the last war religious intolerance was not uncommon. In spite of my father's objection to my participation in anti-Semitic demonstrations in Warsaw, I often heaved stones at windows of stores owned by Jews. I had no qualms about my actions, and later it took months of hardship and persecution – and a Jew – to show me how to abide by the Biblical injunction: "Love thy neighbor as thyself."

When Hitler annexed Austria and war seemed imminent, I quit my job as instructor of a flying club in Lyons, France, and started for home. My plane developed engine trouble and I had to land at Vienna and stay there overnight to have it repaired.

The following morning, just as I stepped out of my hotel to buy a few souvenirs before checking out, a man who came running past the door bumped into me and sent me reeling. Outraged, I grabbed him and was about to give him a piece of my mind when I saw that his face was white with fear. Panting heavily, he tried to wrench himself from my grip and said, "Gestapo – Gestapo!" I knew only a little German but understood he was running from the dreaded German secret police.

I rushed him into the lobby and upstairs into my room, pointed to the foot of my bed and motioned him to lie down. I covered his slender, jack-knifed body with artfully draped blankets so that the tousled bed looked empty. Then I pulled off my jacket, tie, and collar so I could pretend I'd just got up if the Gestapo men came. In a few minutes they did. They examined my passport, returned it and shouted questions, to which I replied: "Ich verstehe es nicht – I don't understand," a phrase I knew by heart. They left without searching the room.

As soon as they had gone, I locked the door and lifted the blankets. The poor man let out a stream of rapid German. It was not necessary to understand a word to comprehend his gratitude.

I got out my flight chart and, by gesturing, and drawing pictures on the margin of the map, explained that I had a plane and could take him out of Austria. He pointed to Warsaw, and his expressive hands asked: "Would you take me there?" I shook my head and made him understand that I had to land for fuel in Cracow. I drew pictures of police and prison bars to illustrate that he would be arrested upon arrival at any airport, and made it clear that we would land in some meadow just over the Polish border and he could get off. He nodded with satisfaction, and his narrow face and dark-brown eyes again conveyed deep thanks.

The customs and immigration men at the airport waved us through when I told them my friend wanted to see me off. My plane was warmed up and ready for flight. We quickly climbed into it and took off. We crossed Czechoslovakia and soon saw the thin ribbon of the Vistula River and the City of Cracow. Landing in a large field by a wood near a country railroad station, I showed my companion where we were on the map, gave him most of my money and wished him luck. He took my hand and looked at me wordlessly, then walked rapidly into the woods.

When I arrived at the Cracow airport there was a detachment of police waiting beside the immigration inspector. One of the police said, "We have a warrant to search your plane – you have helped a man escape from Vienna."

"Go ahead and search it. Incidentally, what was the man wanted for?"

They searched my plane, and of course had to let me go for lack of evidence.

The war came, and after Poland's short and bloody struggle against the Germans, in which I served as a fighter pilot in the Polish Air Force, I joined the thousands of my countrymen who wanted to carry on the fight for freedom. We crossed the border in Rumania and were promptly caught and sent to concentration camps. I finally managed to escape and joined the French Air Force. After France collapsed I went to England and fought in the Battle of Britain. The following June I was wounded while on a fighter sweep across the English Channel, when the Luftwaffe hit us over Boulogne.

In those early offensive missions we were always outnumbered and outperformed by the Luftwaffe, and our only superiority was our morale.

As we started home I rammed a ME-109 and was hit by a piece of its sheared-off tail. I was half blinded with blood. My squadron covered my withdrawal across the Channel, but I was unconscious when my spitfire crash-landed in England. (I learned later that my skull had been fractured, and that I was so near death that the head surgeon of the hospital to which I was taken believed it would be almost useless to operate on me.)

When I returned to consciousness, I gradually realized that a narrow face with large brown eyes was looking down at me.

"Remember me?" their owner said. "You saved my life in Vienna." He spoke with only a trace of a German accent.

His words ended my confusion. I recalled this sensitive face and managed to say, "How did you find me?" I noticed his white smock. "Do you work here?"

"It's a long story," he replied. "After you dropped me off I made my way to Warsaw, where an old friend aided me. Just before the war I escaped and reached safety in Scotland. When one of your Polish squadrons distinguished itself in the Battle of Britain, I thought you might be in it, so I wrote to the Air Ministry and found you were."

"How did you know my name?"

"It was written on the margin of your map. I remembered it."

His long fingers felt cool on my wrist. "Yesterday I read the story in the newspapers about a Polish hero shooting down five enemy planes in one day and then crash-landing near this hospital. It said your condition was considered hopeless. I immediately asked the Royal Air Force at Edinburgh to fly me here. "

"I thought that at last I could do something to show my gratitude. You see, I am a brain surgeon – I operated on you this morning."
Posted by D Goska at 3:06 PM