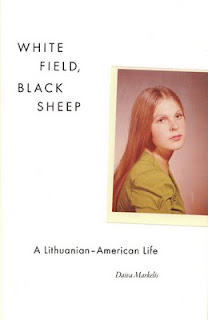 "White Field, Black Sheep" is a crystalline memoir capturing the experience of a Baby Boomer Lithuanian-American girl growing up in Chicago. It's the kind of book that must be read by anyone who wants to understand America. Some memoirs gain popularity because the author is a very calculating fabulator and crafty self-mythologizer. It's now looking like Malcolm X may have fallen into this category. Some memoirs are worth reading because their authors have ice in their veins and can speak truths in public that would turn the rest of us to Jell-O. Markelis amply displays this literary gift of "just the facts, ma'am." Again and again I found myself saying, "Wow, I can't believe she's actually saying this in a published book." I'm not talking about sensational celebrity confessions that might titillate a cheap read. I'm talking about the kind of detail we don't normally mention, but that makes up the substance of our days: a neighbor kid who is a very particular kind of pill but who grows up into a close friend. An undertaker who was once a drunken one-night-stand.

Markelis exhibits a critical mass of the kind of honesty that, when well applied, rewrites history. She does not tell of world-historical events in an expected, approved way. Markelis' ancestors were persecuted by the Soviets (142); her father was a forced laborer for the Nazis (177). Markelis does not wring persecution for all its worth, or induct herself into the category of Person Deserving of Special Rights. Markelis treats her rivalry with her little sister with more weight and attention. Would that all descendents of victimized peoples had such a sense of proportion.

Markelis lived through the epic desegregation battles that rocked white ethnic neighborhoods in Chicago. Markelis tells this tale through the eyes of the child she was. She quotes a letter that a black prisoner sent her (123). The letter is weird, pathetic, manipulative, and very telling about race relations.

Markelis really won me over when she asked, "What is it that I like most about Lithuanians?" And she frankly responded, "I decided that I didn't like Lithuanians very much. They were cliquish and provincial; many were racist and anti-Semitic. Their cuisine was nothing to write home about, and their national costumes made women look fat. I waited for the thunderbolt to strike, the Lithuanian angel of death to pay a visit" (150). I wish I could bottle and sell the sharpness in that paragraph. 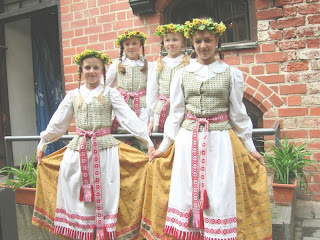 Do I look fat in this? source

Markelis isn't just a courageous voice who honors everyday realities. She commands the art necessary to bring tough facts home in a luxury vehicle. On her deathbed, Markelis' mother requests that her daughter recite a poem from memory. "The words began to leave my mouth like doves released, one by one, into thick summer air and when I finished … I had nothing else to say to my mother" (196).

I'm not Lithuanian, but I'm mindful of the shared experiences of the various Christian, peasant-descent populations of Eastern Europe, from the Baltics in the north to Yugoslavia in the south. I sometimes use the word "Bohunk" exactly because I don't want to use the word "Slav" that excludes the non-Slavs, the Lithuanians, Hungarians, and Romanians. Lithuania and Poland were once one country, and we share folk art like the worried Christ figure, as well as histories of exile and persecution under Soviets and Nazis and manual, immigrant labor in America. I wanted to add Markelis to my list of "writers I could not breathe without" because they honor my own experience. I remember picking up Anzia Yezierska's "Bread Givers" and feeling as if I were learning to read for the first time. When I read about America's most famous Lithuanian fictional hero, Jurgis Rudkus, I shuddered for what we shared: the infinite frustrations of someone born poor and without connections. 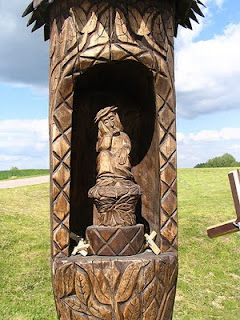 I was at first alienated by the gaps in experience and common language between Markelis and myself. Her parents were not, like mine, peasants in the old country and manual laborers here, but white collar intellectuals. I grew up in a small house, jammed with kids and animals; Markelis' parents were landlords and had only two children. Markelis was taught to recite poetry and didn't learn to cook. I was taught to grind poppy seeds and knead kolache before I could read the recipe – in any case, there wasn't any recipe outside of my mother's memory. No great Polish poet was ever mentioned in my childhood home, and any such mention would, every bit as would the worst obscenity, render the poetry fan a social outcast.

Markelis is mindful of her status among her fellow Lithuanians. She records meeting lower class Lithuanian kids who swore and might beat her up (80-81). I could have been one of those girls.

As I kept reading, though, I came to value not just the similarities between Markelis' story and my own (my mother, like Markelis', was also a stickler for proper language use, both in her native Slovak and her adopted English) but I also came to value our differences. That Markelis can speak in detail about what it's like to be a member of the Bohunk intelligentsia – words she probably wouldn't use – about what it's like to have a mother who wrote college papers about poets, and to have ancestors who starved to death and were buried in unmarked graves, helps me to better understand what Bohunk identity means. It doesn't, necessarily, mean that your father or grandfather earned his bread behind a plow.

"White Field, Black Sheep" throws a monkey wrench into current American understandings of ethnicity that lump all "whites" into one big, undifferentiated mass. It threw a monkey wrench into my understanding of Bohunk ethnicity. After reading this book, I feel I know less, rather than more – it prompts me to question what had seemed obvious before. That's the sign of a memorable read. What I do recognize, and share, is Markelis' palpable if problematic affection for her family and her people – the ones she once decided she didn't like very much, but whom she obviously loves.