Protesters Turn Pond Near Russian Embassy into a "Pool of Blood." 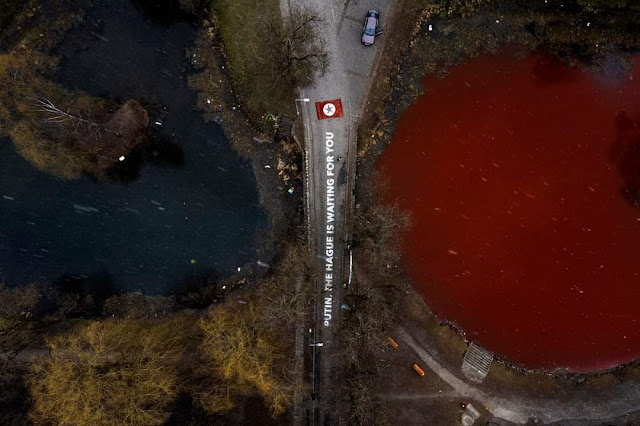 Thanks to Jerzy for sending this in.

From the above-linked article:

In Vilnius, a "blood pond" appeared next to the Russian embassy. This is an expression of opposition to Russia's aggression against Ukraine and the recent events of, among others, in the city of Bucha. Previously, the Russian Embassy in Vilnius had to change its address to ul. Ukraine's heroesThe Russian Embassy in Vilnius is located near two ponds. One of them has become a reservoir full of "blood". As an expression of opposition to Russia's aggression against Ukraine, the Lithuanians organized an action aimed at "drawing the world's attention to the invasion and the genocide committed," said Paulius Vaitekėnas, a representative of the Vilnius City Hall.The action was agreed with environmentalists and services. "Bloody Pond" in Vilnius was created using a special paint. It is harmless to the environment and has no adverse effects on plants or animals, as reported by the authorities.