Poland is Bad No Matter What It Does: Washington Post 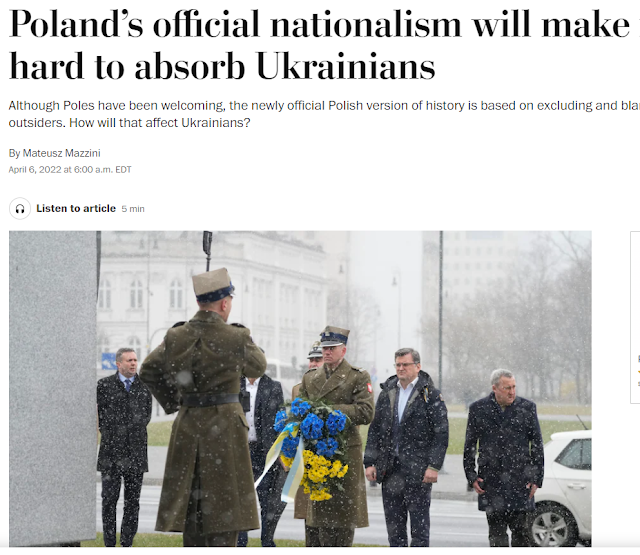 Poland is bad no matter what it does.

Poland has gained admiration around the world for its help to Ukrainian refugees.

Camp Anti-Poland is uncomfortable with this, and so criticism must follow.

Mateusz Mazzini in the Wa Po says that Polish patriotism will interfere with the education of Ukrainian children stuck in Poland while their country is at war.

Mazzini touches on important and complex matters, and that's good.

The problem is, his only point, and the Washington Post, his publisher's only point, is to bash Poland, not to spark an intelligent and compassionate discussion on a difficult topic.

I'd love to see such a discussion. It won't emerge from Western mainstream media, which, for its own reasons, as explored in my book Bieganski, is largely anti-Polish.

Excerpts from the article:

Now, with a massive influx of Ukrainian students in Polish schools, this historical revisionism has suddenly become awkward. One of the key sources of Ukrainian national identity was a serf rebellion against Polish nobility who had reduced Ukrainian peasants to near-slavery and forced educated Ukrainians to learn and speak Polish in the areas of Ukraine it controlled. That is hard to reconcile with the stories of Polish virtue and victimhood that the current Polish government prefers.

On the other hand, during World War II, Ukrainian nationalists tried to exterminate ethnic Poles in the Wołyń area, killing some 50,000 Polish inhabitants. Poles retaliated, although on a much smaller scale, murdering a few thousand Ukrainians. The Wołyń massacre was a delicate and difficult topic for decades in Polish-Ukrainian relations, also because the Soviet domination over both countries blocked any meaningful debate about it. Now it could become a major point of contention, as PiS-reformed curriculums, again, emphasize Polish heroism and the tragedy of Polish victims, leaving little room to even discuss the Ukrainian perspective.

The more fundamental problem is that the official Polish version of history is based around excluding rather than including non-Poles. It’s possible to push such a history in a country that just has one major national group within its borders. Now, suddenly and unexpectedly, Poland has two nations rather than one for the first time since World War II.