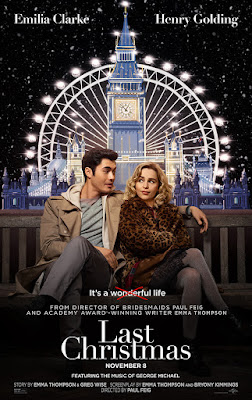 As you can see from the review, below, I very much liked "Last Christmas." But I was totally aware of the stereotyping going on.

"Last Christmas" is a funny, heartwarming, ultimately profound movie. It's being marketed as a romantic comedy but it's more of a dramedy. There are funny lines throughout, but "Last Christmas" deals with some tough issues, and towards the end it sends a beautiful message.

Emma Thompson co-wrote the script. Thompson previously won an Academy Award for best adapted screenplay for "Sense and Sensibility." "Last Christmas" traffics in unflattering stereotypes of Eastern Europeans and it tries to hard to be politically correct, but its wit, warmth, and the chemistry of its stars, Emilia Clarke and Henry Golding, won me over.

The movie opens in the former Yugoslavia, in an Orthodox church, of all places. Petra (Emma Thompson) is watching her daughter Katrina sing a George Michael song.

Fast forward decades later, and move to London. Kate (Emilia Clarke) is an unlikeable mess. She works as an elf / clerk in a year-round Christmas store run by Santa (Michelle Yeoh). Kate is homeless and couch surfs, sleeping with friends and one-night stands. She dresses in clothes that are a little bit slob and a little bit tramp. She's hard to like.

One day she looks out the window of her Christmas store and sees Tom (Henry Golding.) He's a very nice guy. Charming, handsome, and kind. Kate is suspicious.

Eventually Kate and Tom get close enough that Kate confesses her dark secret to him. She had been ill for a long time. Her mother seemed to enjoy too much having a chronically ill daughter, so Kate had to move out of the house. A year earlier, Kate had had a heart transplant, and she hasn't felt like herself since. Tom encourages Kate to get her life together.

Kate returns to her natal family, now living in London. Petra, Kate's mother, is a stereotypical Eastern European. She is always sad, she sings mournful songs, she uses outlandish curses – "I will nail you to my p----" – and she refers to a dessert brought by a gay guest as "lesbian pudding."

The TV broadcasts coverage of Brexit protests and Petra bemoans that people dislike her because she is an immigrant. But she is a bigot herself, albeit a comical one. "I blame the Poles," she says, about current anti-immigrant sentiment in the UK. All this is played for laughs. Otherwise, the movie bends over backward to be politically correct. Four relationships are highlighted in the film, and all four are biracial, and one is a lesbian couple. The one group this politically correct film recognizes it is okay to make fun of is Eastern Europeans. Even so, I loved the movie.

There are no spoilers in this review, so I can't tell you how the movie handles Kate's transformation, from a total mess at the beginning of the film, to someone we can take to heart at the end, but I found the plot device to be quite poignant, and I left the theater with tears rolling down my face. The critics who have given this film a low score need to have their credentials revoked and their minds and hearts opened. Emilia Clarke and Henry Golding have terrific chemistry, and I'd love to see them reunite in a more traditional romantic comedy.