Netflix "All Quiet on the Western Front" and Bieganski 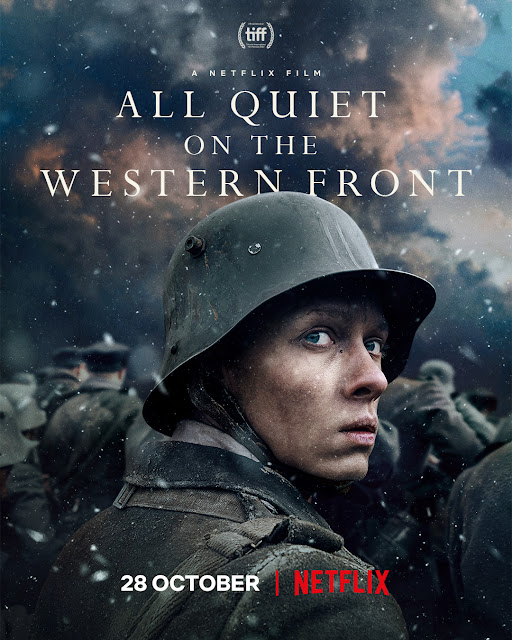 I recently watched the trailer for the 2022 Netflix production All Quiet on the Western Front. The trailer is only two and a half minutes long. After I watched it, I felt like I needed counseling. It is a devastating glimpse of war.

The full movie is even more devastating, as reviews report. I have not seen the film.

After I watched the trailer, I realized a few things:

1.) I'd never see this movie. I know that war is a bad thing and I have watched enough ultra violent, realistic war movies. I won't know more or feel more after seeing this movie. I'm glad if the movie works for others. I'd be thrilled if the film inspired humans to stop all wars. That won't happen, though.

3.) This movie tells part of the back story that engendered Nazism. After watching this movie, people may say, "Well, I can see how, after this, Germans fell under the spell of Nazism." The movie would make Germans and Germany more understandable.

Understanding Nazism is difficult. How could people like us commit such mind-boggling atrocities?

Nazism didn't spring up over night from Hitler's brain. It has roots. See here.

World War I is one of the factors that paved the historical road for Hitler. For one thing, after that devastating and apparently pointless war, nations were not eager to fight again, handing Hitler a free pass for too many years.

But the massive casualties in what has been called history's first mechanized war, Germany's defeat, the "stab in the back" conspiracy theory, and the Versailles Treaty all contributed to Nazism's rise.

Saying that WW I paved the road for Nazism is *not* any justification of Nazism. Nothing justifies Nazism. It is, though, a way to understand, and to see Germans, even Nazis, as human beings.

We need similar media clarifying Poland's back story. We need this media as a way of addressing the Bieganski, Brute Polak stereotype.

The Bieganski stereotype insists that Poles are essential anti-Semites, that is always and everywhere anti-Semitic, because of their nature. People point to various factors in Polish society as proof of this.

They may mention the interwar numerous clausus in universities. That quota system is meant to prove the essential anti-Semitic nature of Poles.

What is not mentioned is that around 80% of Poles were poor and earned their living through labor, mainly agricultural, and that in some regions of eastern Poland, illiteracy was widespread.

Clearly, given the accounts of Endeks beating Jews on campuses, many supporters of the quota system were indeed violent, thuggish, anti-Semites. But the back story, the disproportionate representation of Polish Catholics on campuses and in white collar professions, helps the student of history better to understand social tension in interwar Poland.

My suspicion, that this film will help viewers to understand the road that Germany traveled that made Nazism possible, is reflected in published commentary on the film.

"But Berger's version reaches a new level of poignancy and even urgency given the tenor of the times.It does so first by focusing on the way in which young German boys were turned into cannon fodder by adults spouting nationalist dogma, and secondly by spotlighting how Germany’s capitulation at the end of World War I – and the sense of shame in defeat stoked by politicians – gave rise years later to Nazism and ultimately World War II. In that, says Berger, is a lesson for us all in 2022."

"A modern eye brings more advantages besides. Like Paul, unwitting of the ceasefire ahead, a director working in 1930 could not have known the bleak killing joke the end of the decade would bring. Now Berger spotlights disgust among German high command not at the war but at the coming armistice — already tagged as the “stab in the back” that would help deliver Germany to Nazism. The film is haunted by the ghosts of the future. Could its outrage be any more relevant than now?"

In short, one message viewers are taking from All Quiet on the Western Front is that Germans are human beings like you and me, and only under exceptional historical circumstances would humans like you or me commit atrocities.

The message of Bieganski, in contrast, is that Poles are not humans like you or me. They commit atrocities as they breathe.

The video, below, is a commentary on the film. It includes spoilers and clips. Warning: not for those who do not wish to be exposed to disturbing, war-related material.