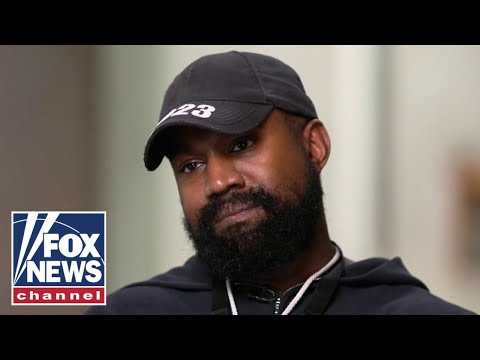 Kanye West is an American rap celebrity. He was married to Kim Kardashian. He is known for making outlandish public statements. After Hurricane Katrina, during a live, televised Red Cross fundraising event, he blurted out that "George Bush doesn't care about black people"

When Taylor Swift, a white woman, was on stage accepting a VMA award in 2009, West jumped onstage and shouted that Beyonce, a black woman, should have won.

Kanye West's ex-wife and the mother of his four kids, Kim Kardashian, divorced him, and then she began dating mystery-celebrity Pete Davidson. Davidson is a mystery-celebrity because he is ugly, and he has no talent nor charisma. It's a mystery why he is famous. Kanye West made a video that appeared to show him kidnapping, decapitating, burying, and threatening Davidson. This violent, threatening video is still on YouTube, which has banned and shadow-banned forthright discussions of jihad and gender apartheid.

And that's all I know about Kanye West.

It must immediately be said that West was diagnosed with bipolar disorder.

It must also immediately be said that one can be mentally ill and also be a dirtbag who has earned himself a good ass-kicking, literal or metaphorical.

Kanye West is spreading hate. His statements can be found all over the web; no need to repeat them here. This behavior is disgusting. I'm glad numerous economic powerhouses have cut highly lucrative deals with West.

Here's what's unfortunate. Too many of those criticizing West for his dissemination of hatred are criticizing him for wearing a t-shirt that read, "White lives matter."

Not for the anti-Semitic filth he's been spouting. For his stating the simple truth that white lives matter.

Someone can be mentally ill, and an anti-Semite, and still occasionally say true things. That our current Woke Overlords label "White lives matter" hate speech is soul chilling. Clearly, white lives do not matter to our Woke Overlords.

African American celebrity Kanye West says hateful things about Jews because he is mentally ill and paranoia is one symptom of bipolar disorder. So far, so good.

A posited Polish-American celebrity would be diagnosed as having said hateful things because of his Polish identity.

Kanye West is black, and black identity is protected in America, and I haven't yet found an article relating West's anti-Semitism to a significant amount of anti-Semitism among African Americans.

If you find such an article, please alert me.

In the case of a Polish-American celebrity saying anti-Semitic things, this is what would happen. Alan Dershowitz, the ADL, Jan Grabowski, Jan Tomasz Gross, and others would be all over the media bemoaning the "fact" that Poles "suckle anti-Semitism with the mother's milk," as Israelis like PM Yitzhak Shamir, Acting Foreign Minister Israel Katz, and Haaretz journalist Israel Harel have repeatedly said, in exactly those disgusting, misogynist, and racist words.

The Polish-American celebrity's comments would never be understood as manifestations of mental illness. They would be attributed to an ineradicable Polish essence, a biological, spiritual, and cultural essence that Jews must always hate. And if you don't believe me, read Yitzhak Shamir's, Israel Katz's, Israel Harel's comments.

Of course not all African Americans are anti-Semites, but ADL surveys report the following: "Anti‐Semitic views among the African American population have remained steady, but are consistently higher than the general population."

"There is a strong correlation between higher education levels and the rejection of anti-Semitic stereotypes among members of all races, but Black Americans of all educational levels are significantly more likely to be anti-Semitic than whites with the same educational level.[93]. In the 1998 survey, Blacks (34%) were nearly four times as likely as whites (9%) to have answers that identified them as belonging in the most anti-Semitic category (those agreeing with at least 6 out of 11 statements that were potentially or clearly antisemitic)." From Wikipedia.

Finally, there is a blatant and deadly anti-Semitic conspiracy theory among African Americans, that is, that blacks are the true main characters of the Bible, and Jews are "usurpers" who have taken black people's place. This conspiracy theory was behind a deadly terrorist attack on a Jewish grocery store in Jersey City in 2019. Wikipedia insists on labeling this terrorist attack a "shooting."

Kanye West subscribes to this deadly conspiracy theory. He claims that blacks are the "real" Jews.

I have yet to come across a media account of West's anti-Semitism that relates it to the larger problem of black anti-Semitism. Again, if West were a Polish-American, that celebrity's anti-Semitism would immediately be related to a corrupt Polish essence, biological and cultural.

In contrast to how a Polish celebrity would be treated, see Isaac Herzog, Israel's president, as he is interviewed by Wolf Blitzer. "Anti-Semitism is a problem all over the world," they both agree. As are all racism, xenophobia, intolerance, etc. they add.  That would be not be said in the case of the Polish celebrity. Hate would not be characterized as a universal problem. It would be a Polish problem. That interview is here.