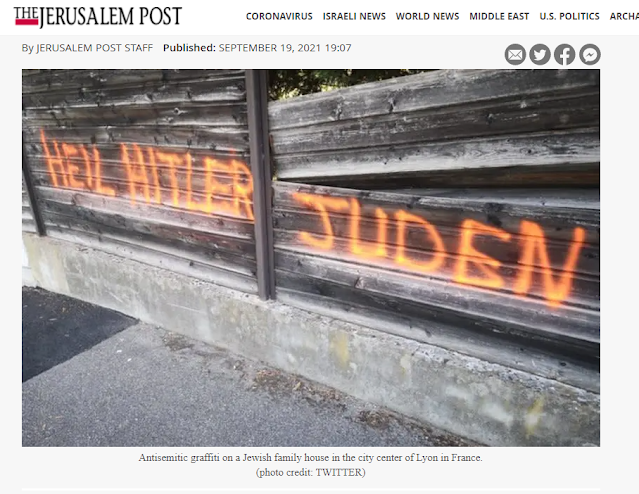 A Facebook friend directed me to the article, discussed below. It alleges that a Catholic church in Poland was selling disgusting anti-Semitic material.

I read the article and was horrified by it.

Then I read the comments. The bigoted hatred for Poles and for Catholicism expressed in the comments section sickened me.

Yes, there are anti-Semitic Catholics and Poles. These people, for the most part, occupy the nether regions of society. Decent people recognize them as monstrous and reject them.

Too many "nice" people, though, including too many "nice" Jews, repeat bigoted statements about Christianity, about Catholicism, and about Poles and Poland. These prejudices find their way, not into marginal books that arouse outrage and elicit condemnation, but into publications that win academic and journalistic awards.

I have documented this in my book, Bieganski the Brute Polak, and on this blog.

I am disgusted by, and I condemn, the phenomena described below: anti-Semitism, Christophobia, and hatred of Poles. I welcome anyone who joins me in condemning all three.

In the comments, someone alleges that the books were not being sold in or by the church, and also alleges that the journalist is far-left. Also, a commenter pointed out that the photo the JP used to illustrate an article about anti-Semitism in Poland was in fact from France. See that photo,  above.

The full Jerusalem Post article is here. An excerpt is below.

Titles included Scum and the Jews in Today's Poland, Judeopolonia II - Anatomy of Enslaving Poland and Homoterror. Additionally, there were books that blamed Jews for the COVID-19 pandemic.

Aside from prominent Catholic figures, the ceremony was attended by Poland's President Andrzej Duda, Prime Minister Mateusz Morawiecki and the head of the country's ruling Law and Justice Party, Jaroslaw Kaczynski.

Wojciech Karpieszuk, a journalist who attended the ceremony, wrote an article for the Gazeta Wyborcza describing his unease at the sight of the books and the fact that no one else around him seemed to be bothered by them.

"During those 40 minutes, I didn't see a single reaction of indignation. Nothing," he wrote. "Many of the clergy, and even one bishop among them, passed by the stands indifferently."

End of excerpt. Excerpts from the comments section, below.

Those people were street sellers; they weren't part of the ceremony.

Btw Karpieszuk is a journo for a far-left news outlet.

Roman Catholicism always was a factory of antisemites that eagerly awaited two simultaneous things: first the permission or indifference of the State, and second the silence of the Pope, to unleash another Judgment Day against the 'Cursed Race of Cain.'

After the annihilator end of the WWII and the unexpected creation of the state of Israel, the Second Vatican Council left traditional antisemitism in the background in order to focus all forces into the creation of a Palestinian state that would gradually, or suddenly, destroy the state of Israel, this time with the help of the worst enemy of Christianity: the Islam.

That is why the papists very much like to resort to a quotation from the gospels to justify the change of orientation, which is found precisely in Paul's letter to the Hebrews 13:8: 'Jesus Christ is the same yesterday, today and forever'.

Poles were more harsh than Nazis.

Most Polish were Nzi Sympathizers.

In March 1940, NOR co-organized with Germany a series of assaults on houses and shops of Warsaw Jews, known as the Easter pogrom. During the incidents, NOR representatives appealed to the Polish society for participation in pogroms.

Anti-Semitism was a way of life in Catholic Poland.

"Prior to World War II, anti-Semitism was an increasingly visible factor in Polish society, and government authorities took formal measures to exclude Jews from key sectors of public life. A nationalism deeply rooted in Catholicism was central to that struggle."

I think we have to accept that Poland, with its long history of domination by the Catholic Church, will take many generations before this deeply-rooted racist bigotry will be expunged, although I am not hopeful it ever will.

Is brutality in Polish blood?

This is typical of the Polish Catholic Church and the Polish right-wing, nationalist government. Anti-Semitism is endemic in Poland. Why would the journalist in question be surprised by the sale of anti-Semitic books in Warsaw’s main church at a beatification ceremony?

Such short memories but are we surprised that the Cathloic Church persists in its disgusting portrayal of the Jewish people.

Where is the condemnation by the Pope?

Poland dumber than the rest of Europe? … Poles are savage … these people have yet to evolve

As much as we love to hate the Poles, stuff like this is "peanuts" compared to what's being disseminated in Western Europe (not to mention the Arab world)

Poland had anti-semitic laws before WW2 that were similar to Germany's.  Just one year after Hitler gained power, Poland signed a friendship treaty with Nazi Germany. In 1935, Hitler hosted a memorial service for Poland's leader Pilsudski. The Germans double-crossed their Polish friends, but the Poles still blame Jews for their misfortunes. Even though almost no Jews remain in Poland (who can blame them?), Jew hatred runs deep.