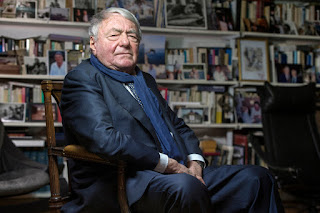 French filmmaker Claude Lanzmann, whose works primarily dealt with the Holocaust, has died at ninety-two. I don’t plan on evaluating the artistic merits of his work, but I would like to write a little bit about his corrosive effect on Polish-Jewish relations.

It is no secret that Lanzmann had a very negative opinion of Poland and the Poles, which is evident in his films and statements. Lanzmann’s most famous film is the 1985 documentary "Shoah," which clocks in at over nine hours running time. I haven’t seen the film, so I can’t have an opinion about it. I didn’t see it not because I might disagree with parts of it; rather, I simply have too busy a life to devote nine hours of my life to watching a film. Marek Edelman, the late hero of the Warsaw Ghetto Uprising (and of the Warsaw Uprising and Solidarity) criticized Lanzmann as being self-indulgent in making such a lengthy film.

Lanzmann’s film is long, but it features only a tiny fragment of the hundreds of hours of interviews he did across Poland. For the film, he interviewed Jan Karski, the famous courier of the Polish underground who informed Churchill himself and the British about the genocide of European Jewry. Lanzmann had told Karski that the film would include the stories of Poles who risked their lives to save Jews. Although Karski thought "Shoah" was a moving tribute to the victims of the Holocaust, he was disappointed that there was no talk of Polish saviors of Jews; every single Pole except him who is featured in the film is a primitive anti-Semite.

In an early report to the Polish government-in-exile in London, Karski famously wrote that anti-Semitism was the only “narrow bridge” where the German occupier and “a large part” of Polish society “found agreement.” In other words, Karski wasn’t someone who denied that Polish anti-Semitism was a widespread phenomenon, but even for him Lanzmann was not objective and unfair to the Poles. This lack of balance was also criticized by Władysław Szpilman, the real-life hero of Roman Polański’s film "The Pianist." Unlike Shoah, "The Pianist" shows Polish-Jewish relations in a balanced way and shows the sufferings of not only Jews, but of Polish Gentiles in German-occupied Warsaw. Szpilman gave an interview for the French press (I think it was for Le Monde, but don’t quote me on this) in which he blasted "Shoah" for showing a very one-sided picture of Polish-Jewish relations. Szpilman criticized Lanzmann for not showing Polish rescuers of Jews, while in the interview he himself emphasized that he owed his life to the concerted efforts of many non-Jewish Varsovians.

In 2015, I attended a screening in Krakow of Lanzmann’s interview with Tadeusz Pankiewicz that did not make the film’s final cut. Pankiewicz was a pharmacist who operated the Under the Eagle Pharmacy (“Apteka pod Orłem,” which now is a fine museum) in the Krakow Ghetto. Along with his small staff, Pankiewicz was the only non-Jewish Pole who was allowed to enter the Krakow Ghetto. He saved many Jews by giving them life-saving medicines; his pharmacy was a liaison point from which Jews were smuggled out of the ghetto; and during German roundups of Jews to be deported to camps, Pankiewicz gave tranquilizing medicines to Jewish families so that their children wouldn’t cry, which would inevitably give them away. (I recommend Pankiewicz’s moving memoir, which has been translated into English.)

Pankiewicz is featured in Thomas Kenneally’s novel "Schindler’s Ark," although not in Steven Spielberg’s film adaptation, even though a scene featuring the pharmacy was included in the script. Oskar Schindler was a German who initially employed Jews to have cheap labor. Only later did Schindler have a change of heart. Schindler never risked his life, unlike the thousands of Poles in Krakow who sheltered Jews. I find it unfortunate that Schindler is much better known than Pankiewicz. And the interview with Pankiewicz was not included in the final cut of "Shoah." This can only be seen as deliberate.

Returning to Karski, part of "Shoah" shows an interview with the famous courier. Back then, he was only known as a professor at Georgetown University; very few people knew about his heroism during the war. In fact, humility is a common trait of great souls, and Karski didn’t brag about what he did. On the contrary, he often suffered from depression, feeling irrational guilt for not succeeding in saving the European Jews from annihilation. Lanzmann’s documentary featuring the interview (I did see this fragment) only shows Karski about what he witnessed when he was smuggled into the Warsaw Ghetto, disguised as an Estonian guard. There is ABSOLUTELY NO INCLUSION of Karski’s tragic meeting with Roosevelt and the British and their absolute indifference to the tragic fate of European Jews.

In the 2000s, Lanzmann came under increasing fire for his omission, and the French writer Yannick Haenel wrote a novel about Karski that was a response to Lanzmann’s manipulative use of his interview with Karski. Haenel won the prestigious Prix du roman Fnac for this work. In response to Haenel’s criticism, only then did Lanzmann release his full interview with Karski.

Lanzmann has also made some pretty stupid and ignorant statements about Poland. He once said in an interview (I don’t remember where and when, but I definitely read this) in which he said that the Germans established concentration camps on Polish soil because the Poles are congenital smelly, primitive anti-Semites, and that it would be inconceivable for camps to be established in France.

Apart from the basic fact that Poland was under an extremely brutal occupation and that no Poles served as guards or administrators in the camps (unlike Ukrainians, for example, who made up the vast majority of the guards in Treblinka, where nearly a million Jews were gassed to death), no historian believes this balderdash. Lucy Dawidowicz, a well-respected historian of the Holocaust, wrote: “The Germans used Poland as their gigantic laboratory for mass murder, not (as has sometimes been wrongly charged) because the Nazis counted on Polish anti-Semitism, but because that was where most of Europe's Jews were concentrated and where the Germans expected to settle for a long time.”

Lest anyone accuse Dawidowicz of a pro-Polish bias, in the 1980s she spearheaded the effort to deny Norman Davies tenure at Stanford for what she felt was his minimization of Polish anti-Semitism. Davies ended up at Oxford.

Lanzmann was wrong when he said that the Germans didn’t build camps in France. Natzweiler-Struthof, built in Alzace-Lorraine (which was in the part of France annexed by the Germans, but Kulmhof and Auschwitz were similarly in parts of Poland that the Germans annexed and colonized, expelling 900,000 Polish and Jewish residents) featured a gas chamber. There, Jews were murdered so that their skeletons could be used for “scientific” study proving their alleged racial inferiority.

Meanwhile, unlike in Poland, France formed a collaborationist government that introduced anti-Semitic legislation with no German pressure (unlike in the case of Mussolini’s adoption of the Racial Laws in Italy) even more stringent than the Nuremburg Laws and deported 76,000 Jews to extermination camps, all but a couple thousand of whom died. The French state also ran a system of detention camps on French soil. The most famous one was at Drancy outside Paris, entirely run by French gendarmes. In them, 3,000 Jews were killed. For more information on the complicity of the French state in the Holocaust, I recommend the work of Columbia University historian Robert Paxton.

Claude Lanzmann also made some extremely stupid comments on Andrzej Wajda’s film "Korczak" when it premiered at Cannes in 1990 to a standing ovation. For those of you who haven’t seen this fine film (you can stream it on Amazon for $2.99), it tells the story of Janusz Korczak, the Polish-Jewish doctor, humanitarian, and author of children’s books that are still read in Polish elementary schools, who refused a hiding place outside the Warsaw Ghetto so that he could accompany the children from their orphanage to their deaths in Treblinka.

This is a sad, beautiful film; Steven Spielberg called it one of the best European films on the Holocaust. The film "Korczak" ends with the titular protagonist and his children in a train heading towards Treblinka. Their car detaches from the train, and the children run into a meadow filled with flowers. Showing how much of a bigoted fool he was, Lanzmann accused Wajda of Holocaust denial. And, since Wajda was a non-Jewish Pole, then, in Lanzmann’s estimation, he must have been an anti-Semite. The fact that the screenplay was written by Agnieszka Holland, the daughter of a Polish Jew and the Polish Gentile who saved him, made no difference.

Of course, this was a fantasy sequence that was supposed to symbolize how Korczak made his children’s tragic fate slightly more bearable by using the power of the imagination to make the Holocaust less horrific. This theme would reappear in Robert Benigni’s "Life Is Beautiful" eight years later. Andrzej Wajda was a very cultivated and educated man active in the Polish resistance during World War II. He knew this ending was not what literally had happened. Many Polish Jews, including Marek Edelman, defended the ending to Wajda’s film. In fact, there are a couple scenes in "Korczak" that present a very damning account of anti-Semitism in Poland in the 1930s and during the war. Unlike Lanzmann, Wajda was balanced and his film shows Korczak's numerous fans offering to risk their lives to hide him outside the ghetto.

Claude Lanzmann had a very negative on Polish-Jewish relations. Undoubtedly, the fact that he was recognized as an important cultural figure gave anti-Polish prejudices legitimacy. Like Jan Karski, I don’t deny that anti-Semitism was widespread in twentieth century Poland and that not all Poles acted as decently as Tadeusz Pankiewicz towards the Jews during the Holocaust, but I do believe that the sensitive topic of Polish-Jewish relations should be approach with balance and not by making blatantly false statements about history.