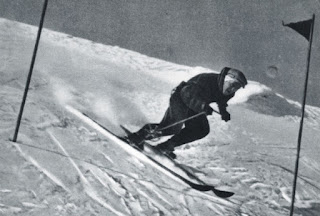 This piece could have had so many titles: “Don’t Upset the Poles”, for instance, a wordplay with the obvious reference to the above picture of an Olympic skier dodging the marker poles, or, perhaps, borrowing from Jonathan Swift’s condemnation of the War of the Spanish Succession of the early 1700s; “The Conduct of the Allies”, which would involve a discussion of the progressively deteriorating relations between Poland and its Allies during the war and for decades afterwards, culminating in the kind of attack we have just seen at the Belfast Telegraph; or an amalgam, using a reference from both Swift and another Irish writer, James Joyce, ”The Conduct of the Alligators”(in Joyce’s ‘Ulysses’, a character asks “who made those allegations?”. “I” replies another. “I’m the alligator”); or just simply “Fear and Loathing at the Belfast Telegraph”. I opted for the one above because it seems the insular editors at the BT have only just discovered Europe and the revelation that it is not just Northern Irish politics which need to be treated with sensitivity seems to have come as a bit of a shock to them. Indeed, a paraphrase from yet another Irish writer, Oscar Wilde, might sum up the situation at the Telegraph editorial offices so far, following the “Poles and Auschwitz” furore. “To delete all comments to a controversial article may be regarded as a knee-jerk reaction, but to deny the right of reply to an ambassador might seem like clear bias in favour of the alligator”, the ‘alligator’ in question being the writer of the original letter, Dr Kevin McCarthy.

Again , with reference to the above photo, I was tempted to use the tabloidesque “It’s Downhill All the Way at the Belfast Telegraph”, but that would be quite unfair. (But quite funny, I thought). The person pictured, by the way, is Olympic skier and mountain rescuer Bronisław Czech. What has he to do with the Belfast Telegraph? Follow me, if you will, down the long and winding slalom.

Many of us have remarked at how the Allies – particularly the Western ones who were once so cordial to Poland – seem to be going further and further down the road of not only rehabilitating Germany (which, in itself, is no cause for offence, since Germany has done a great deal to earn its readmission to civilized society), but what is contentious and unfair about this whole process is that it has come at a price – and it is precisely Poland, one of the Allied nations, which is paying that price. This central European country is increasingly being made into a scapegoat for all the evils of WWII. This is, of course, one of the significant themes in Danusha Goska’s book ‘Bieganski, the Brute Polak Stereotype’ – soon to appear in Polish translation – and I would recommend it as an illuminating read to the editors at the Belfast Telegraph who have taken the entitlements of press freedom into a zone the horrors of which they themselves could hardly have been expecting.

Belfast, for those readers in Poland who may not be entirely au fait with the political situation in the British Isles, is in Northern Ireland, which is a part of the UK and not in Eire, the independent republic. The city was attacked by the Luftwaffe four times in 1941, according to Irish History Live

and although Northern Ireland was exempt from conscription, many volunteered to serve in the British forces. Indeed some of the editors at the Belfast Telegraph may well have had parents or grandparents who fought against the Nazi Germans.

The general issue of freedom of the press, championed by the Belfast Telegraph, is an important one, of course. Anyone who has followed the exchange of views in letters and comments at the BT following Dr McCarthy’s original inflammatory letter, can see that its publication became a bit of a test of press freedom. The British press advisory body, Ipso, ruled in favour of the Telegraph after a reader in Eire brought a complaint.

A Telegraph columnist, Mick Hume, immediately wrote a piece hailing the ruling as a victory for press freedom, but also effectively questioning the need for an independent arbitrator in the first place.

The existence of a regulator is a “complainants’ charter”, complained this BT columnist and a “problem for our hard-pressed Press”. Mr Hume’s column gives the distinct impression that he considers Ipso as an unnecessary brake on press freedom, and he seems to disregard the obvious alternative to an independent regulator which can only be a free-for-all, dog-eat-dog scenario in which those who can afford libel lawyers stand any chance of redress if they dare to take on giant press organizations. People in the US and elsewhere may not be aware of the rather sorry history of UK tabloid excesses, or the infamous hacking scandal which eventually led to the Leveson enquiry, after which the old independent press regulator was deemed not independent enough and was replaced by a different independent press regulator, which, in turn, was criticised as lacking true independence by campaign group ‘Hacked Off’.

Will we ever get a truly independent body here in the UK, which is essentially what Lord Justice Leveson was proposing? The need is clearly there. Quis custodiet ipsos custodes?

Dr McCarthy’s unbelievable and damaging allegations may fall within the strict definition of free speech inasmuch as he is only expressing a personal opinion, but the same could be said of anyone who wants to defame a group or individual. The Belfast Telegraph may have been legally entitled to print what was clearly marked as a reader’s letter and may not have necessarily reflected the view of the BT editorial board – which is the strict point of the Ipso ruling – but the BT must take its share of responsibility for publishing what they must have known was a highly contentious viewpoint. And who composed the “Auschwitz” headline above the letter? Dr McCarthy or a clever BT editor?

As an aside, it is not for me to suggest that Dr McCarthy may want to apologise to the other Dr McCarthy of UCC for placing him, however unwittingly, in the position of a target for unwelcome and unwarranted attention – for all I know, this may already have happened.

In view of everything that has been written since the ‘Auschwitz’ letter appeared, the editors at the BT may wonder if it was wise to publish at all. Telegraph columnist Paul Connolly points out

that it may have been unwise of the Polish embassy to ask for the offending letter to be removed. (Let it stand, by all means, as evidence of Dr McCarthy’s position – unless he modifies it, of course), but, in my opinion, the ambassador should certainly not have been rebuffed and should have been given the right of reply. There seems to have been some shock at the BT at the torrent of reactions which came in from Poles and Polonians. Some comments, of course, have been less polite than others, but did the BT really expect courtesy from representatives of a nation who had been collectively accused of playing a role in the siting of German death camps in which their own family members may well have died? The overwhelming majority of Auschwitz victims were, of course, Jews from all over Europe, but the first group to be killed, as many pointed out, were Polish Christians. And how can commentators really have a right to reply if all their comments are due to disappear tonight because of “essential upgrade work on the contents management system”? Patryk Malinski’s solitary letter here and not the ambassador’s reply, will be the only one allowed to stand, in that case.

To bring in the murderous events at Kielce as evidence of Polish anti-Semitism does not support the original contention that the Poles therefore were ready to “accept” the camps. Apart from the fact that the circumstances behind the post-war Kielce massacre are still being fiercely debated, the situation in 1939 was that the defeated Poles were in no position to accept or reject anything. Of course there was anti-Semitism in Poland before the war, just as there was everywhere else in Europe in the thirties. But the point of contention is that the Hitlerites of the German Third Reich constructed their camps on Polish soil, not because of any “ingrained-Polish anti-Semitism”, but for the simple reason, as the above letter and several other correspondents pointed out, that, at 3.3 million, the Jewish population of Poland was the largest in Europe.

As I mentioned earlier, the Belfast Telegraph defends its right to print controversial material and hails the Ipso ruling as a victory for free speech, but by deleting comments and denying an ambassador the right to reply, it is also muzzling the freedom to express what is for them an inconvenient viewpoint. They are clearly uncomfortable in the unfamiliar zone of European politics. They may be extremely sensitive when it comes to the rather complex politics of Northern Ireland, but they have apparently only just discovered that Europeans have sensitivities too.


I haven’t forgotten Olympic skier Bronisław Czech. Three times ski jump winner at St Moritz, first Polish skier in the International Class, he joined the Polish Underground at the outbreak of war, was a courier to Hungary, and was arrested by the Gestapo in 1940. If the cross on his gravestone is anything to go by, he was one of millions of Christian Poles who fell victim to Hitler’s murderous Third Reich. Belfast Telegraph, please note: it was not only Jews who perished in the death camps. Bronisław Czech died in Auschwitz in June 1944.
Posted by D Goska at 10:27 AM