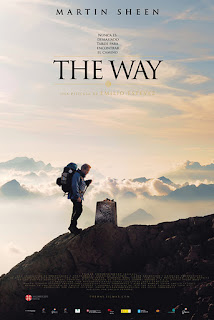 "The Way" has just about nothing to do, directly, with Polish-Jewish relations.

It's a good movie. My imdb.com review is below:

My eyes were wet and I laughed out loud in the first fifteen minutes of "The Way," and I continued laughing and crying throughout. I left the theater feeling the generous glow that a good movie inspires. I'll now be telling everyone I know to see this film, on a big screen, and I'm already looking forward to seeing it again.

I was a bit anxious about "The Way." I anticipated so many ways a movie that features backpacking, pilgrimages, and religion could go wrong. Would it be excessively pious and maudlin? New Age-y and Christophobic? Simply a bad movie? There is a reason so many films focus on graphic, intimate scenes and explosions: those are easy to shoot and they arouse viewer interest. "The Way" rapidly calmed my anxiety. It's a honey of a movie.

Tom (Martin Sheen) is a sixty-something ophthalmologist. His son Dan (Emilio Estevez) dies in an accident. Tom travels to France to retrieve his son's body. Learning of his son's attempt to walk the camino, Tom decides to cremate his son's remains and carry them as he fulfills his son's plan.

Tom walks through picturesque, mountainous countryside and through the plazas of old towns. As happens when one is traveling, Tom encounters an assortment of eclectic characters. Joost (Yorick van Wageningen) is a corpulent, talkative, pot smoking Dutchman who is walking the trail to lose weight. Sarah (Deborah Kara Unger) is a sharp tongued, very angry Canadian blonde. Jack (James Nesbitt) is an Irish travel writer with the gift of gab – he didn't just kiss the Blarney Stone, he went steady with it. There is a priest with a brain tumor who distributes rosaries, and pilgrims debating the roles of the French, the Spanish and the Basque in ancient battles against invading Moors. Waiters take very strong stands on tapas. Gypsies defend their honor.

There was a moment in this movie in which I, a traveler and backpacker, was one hundred percent engaged. In superhero movies, I don't really care if the superhero gets the dilithium crystals to the giant spider. In this movie, a backpacker drops his pack into a rushing river that rapidly sweeps it toward the sea. THAT scene commanded my full engagement. The backpacker's pack contains his entire world, his heart, his safety, his entertainment, his identity, his survival. I was on the edge of my seat.

What happens in the movie is what happens when you travel, and when you pray. The demands of travel bring forth bonding rituals – I'll listen to your rant; you'll bail me out of jail – that create intimacy with unexpected, and all too temporary, companions. There are sudden and heart-wrenching confessions that make two strangers more intimate than family members. There are little triumphs that make it all worthwhile – finding orange trees laden with fruit after a night of sleeping on cold ground, one night in a five-star hotel after punishing weeks of self-denial.

Martin Sheen is so convincing as Tom I really lost the sense of watching a movie. Tom is a man of few words or gestures, and Sheen's every subdued facial expression carries weight and feeling. I had the sense of those who interacted with Tom that I would appreciate a mere word from him more than a paragraph from someone less grounded and sincere.

I really disliked Joost at first, and, come to think of it, many of the other characters, as well, but the film, without any visible effort, brought me to appreciate them the way you can come to appreciate someone you've shared the road with. When Joost is asked why he is walking the trail and he finally tells why, it is a very poignant, precious moment, so utterly believable it could have been in a well-made documentary. Van Wageningen will receive many love letters from women who cannot separate him from Joost, a fictional character so believable he makes you want to hug him. James Nesbitt could be extemporizing his lines, they feel so lived-in. Deborah Kara Unger gives new life to an ancient prayer.

I wish the movie had done a couple of things it did not. I just did not believe that Tom could immediately begin walking the camino in anything but a halting fashion. Many non-hiker friends have called me the day after a hike with me to tell me that their feet are so covered with blisters they can't put on shoes, and their muscles are so sore they can't move (the big babies.) I would have liked to have seen Tom breaking his body in to the demands of the trail. I also would have liked to have seen even just a brief scene where he purchased footwear. Very few ophthalmologists cross the Atlantic with the proper footwear for a walk hundreds of kilometers long, and footwear is a big deal for a walker. I would like to have seen the walkers interact with their packs, something that all hikers do – a tightening of the belt strap here, a loosening of the shoulder strap there. They become a part of your body.

I wish the direction and cinematography had done something more with the countryside and the historic plazas and churches, which are always shown in a way that is pretty, but not innovative. I wish we learned a bit about the keepers of the refugios, the hostels where pilgrims spend the night. To the pilgrims, the towns change every day. To the towns, the pilgrims change every day. How do these dovetailing experiences illuminate each other? And I wish more had been said about religion, although what little is said is intriguing and implies worlds of meaning. I wish more had been said about the alleged sacredness of some places.
Posted by D Goska at 1:17 PM