"Final Account" is a 2020 documentary by Luke Holland. The film consists of interviews with Germans who were Nazis in their youth and participated in World War II in various functions. Holland found out when he was 14 that his mother was a Jewish escapee from Austria just before the Nazi occupation. Holland's maternal grandparents died in the Holocaust. He began work on the film in 2008, 63 years after the end of the war, so his informants were very young when they began their Nazi careers. One recalled being a nine-year-old and standing arm in arm with other Nazis preventing shoppers from entering a Jewish-owned store. In the interviews, the informants are in their eighties and nineties. Holland interviewed over 300 former Nazis and obviously only a tiny fraction of those interviews appear in the 90 minute documentary. Holland received a terminal cancer diagnosis in 2015, and he died at 71 of cancer after the film was finished.

Obviously many previous films also feature interviews with former Nazis, survivors, and witnesses, including "Shoah," "Shtetl," "Hiding and Seeking," etc. What sets Holland's film apart? I recommend this film because it is very watchable. It is brief and rapid. The interviews are so substantial that watching it twice I still felt I wanted more. I really wanted to know more about all the informants. For someone who doesn't want to invest nine and a half hours in watching "Shoah," perhaps they will watch "Final Account." Of course "Shoah," widely hailed as a masterpiece, offers the viewer much more than a brief film like "Final Account" can offer, but the simple fact is that the number of viewers willing to watch all of "Shoah" is much smaller than the number of people willing to watch a 90 minute film, and the more people know about Nazism and the Holocaust, the better.

"Final Account" focuses exclusively on Germans and Austrians. Unlike "Shoah," it is not interested in transferring Holocaust guilt to Poland or anyone else. The Germans in "Final Account" are nice people. I mean that; I'm not being ironic. I'd want these folks as neighbors. They are grandmotherly and grandfatherly, polite and charming. Even the interviewees who say things like "I don't blame Hitler" and "I don't believe that six million Jews were killed" and "The SS had nothing to do with atrocities" come across, not as monsters, but as conventionally decent people. I would lend money to these people and not worry about their paying it back. I would allow them to babysit my child, for a brief period. I would assume that if I lived next door to them, I'd never have to call the police on them. Even though I am Polish Catholic and that very SS to which some of them belonged, that never participated in atrocities, included the Einsatzgruppen who committed mass murders of Polish Catholics.

The Einsatzgruppen's mission was to kill members of the Polish leadership most clearly identified with Polish national identity: the intelligentsia, members of the clergy, teachers, and members of the nobility. As stated by Hitler: "... there must be no Polish leaders; where Polish leaders exist they must be killed, however harsh that sounds". SS-Brigadeführer Lothar Beutel, commander of Einsatzgruppen IV, later testified that Heydrich gave the order for these killings at a series of meetings in mid-August. The Sonderfahndungsbuch Polen — lists of people to be killed — had been drawn up by the SS as early as May 1939, using dossiers collected by the SD from 1936 forward. The Einsatzgruppen performed these murders with the support of the Volksdeutscher Selbstschutz, a paramilitary group consisting of ethnic Germans living in Poland. Members of the SS, the Wehrmacht, and the Ordnungspolizei also shot civilians during the Polish campaign. Approximately 65,000 civilians were killed by the end of 1939.

I would feel comfortable interacting in a neighborly way with these charming, elderly Germans, even though I cried in shock and disbelief while watching their interviews, because these people did not decide on their own to commit mass murder. They were decent people swept up in a movement directed by virtual demons, exceptionally sick and evil people like Hitler, Himmler, and Goebbels.

"Final Account" is too brief to present a detailed retelling of the historical perfect storm that paved the way for Nazism: WW I, Germany's defeat, the Versailles Treaty, the Depression, the Weimar Republic, the scientific racism that was accepted by scientists all over the world, etc. But Holland does show archival film of children participating in Hitler Youth and other Nazi events. He wants his audience to understand what appealed to these young people. "We loved the uniforms, the camaraderie, the athletic games," they testify.

In one scene, very thin German children are shown eating at what might have been a Hitler Youth picnic. Otto, whose parents were part of this generation, also saw the film. He told me that when he was watching that scene, he thought of how hungry his father was, and how the Nazi's providing food to children was part of their appeal.

No, I'm not saying that being hungry is an excuse for committing Nazi crimes, even so relatively minor a crime as blocking shoppers' entrance to a Jewish-owned store. But Nazism didn't just require vicious, cold-blooded killers. It also required, as one of the informants was, bookkeepers, and men deeply committed to their own honor.

Stephen Smith, executive director of the USC Shoah Foundation, was in touch with Holland since the project's origin … "Seeing them as human beings really makes the movie's point that there were no monsters. They were human beings that did monstrous things and were living with the consequences," says Smith. "The final account is Luke holding them to account to some degree and shows us the fragility of human nature, how easily we're beguiled by ideology and by putting on a uniform."

The opening scenes of children participating in Nazi activity and being indoctrinated in hating Jews and other "life unworthy of life" reminded me of today. Little children are being brainwashed in American schools right now to believe that some people, only because of their skin color, bear the taint of evil, and other people, again because of skin color or other immutable characteristics, are above judgment. We can't stand up to the evils of the past. Time has marched on. But we can stand up to evils today. When powerful people tell us that some of us are tainted simply because of the color of our skin, and others are above judgment, we can be that thorn-in-the-side of powerful lies.

There's a scene in "Final Account" when a man in his eighties who was a Nazi in his youth speaks to young Germans. The documentary claims that they met in the very building where the Wannsee Conference took place. I was very touched that the speaker condemned the destruction of Warsaw. I don't know if I've ever hears similar words before. I've been reading, writing and thinking about Nazism for decades and I don't know if I've ever come across any German expressing regret for what Germans did to Poland. Germans have obviously and repeatedly, on stages big and small, expressed regret for the murder of Jews. Poles, it seems, aren't even a shadow in their nightmares, a footnote in their confessions. It was good to hear a German express regret for the destruction of Warsaw.

Below are some screencaps from the movie.

The first screencap is of a German woman saying, "They didn't belong to our ethnic group," in other words, why care about them? Students are being taught such attitudes in American classrooms today.

"I didn't really care that the synagogue was burning down" on Kristallnacht, another German says. Why should he care? Not my ethnic group.

"I was just a bookkeeper!" at a concentration camp.

"We discovered them and reported it." This informant was the most disturbing to me. He reported escaped Jews hiding in farm outbuildings. His face was a storm of sadness, guilt, and indifference. I think he had a very uncomfortable time when he met his maker.

"The SS had nothing to do with it. I had no regrets." Sure, buddy.

The next informant, a man with multiple religious statues behind him, including one of Padre Pio, acknowledged that the SS committed atrocities, atrocities he witnessed.

"It was cruel, but I did not care who burned." I think this was the informant who had a Jewish grandmother. He adopted Nazism enthusiastically, nonetheless.

The next series of photos is of the former Nazi confronting a young German who said shocking things to him. A confrontation.

"I would dirty myself if I admit to that." This same informant said he blame Hitler for nothing. Not even the Nero Decree, I guess. Denial.

The man with the white hair and stunning blue eyes said that Germans said three things after the war. "I didn't know, I didn't participate, and if I had known I would have acted differently." He ended the interview.

"The idea was correct," this man said. Hitler should have simply deported the Jews, but not killed them. Mind, there were only about half a million Jews in Germany, a country of, I think, 80 million, and they were mostly assimilated

The final three photos are of a visit to a home for the elderly in Ebensee, Austria, near a concentration camp. At first, an informant says "we knew nothing." As the interview progresses, it becomes clear that they did know, and at least one woman participated, by hiding her SS boyfriend for months after the war. 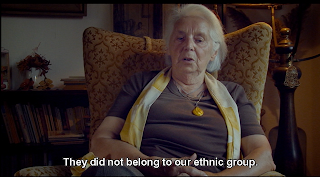 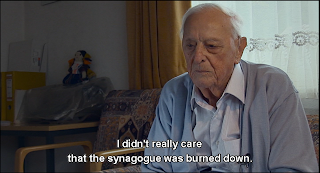 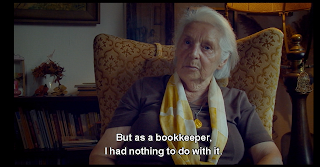 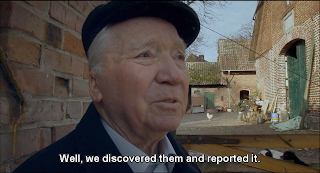 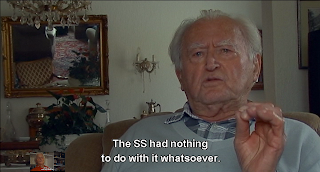 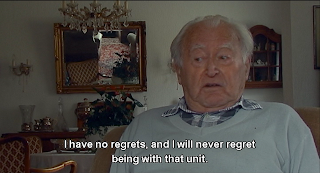 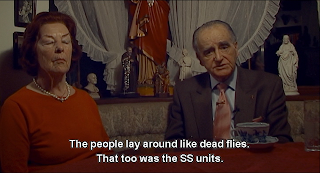 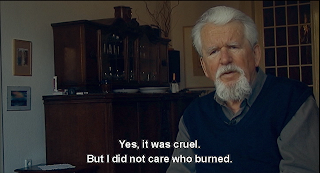 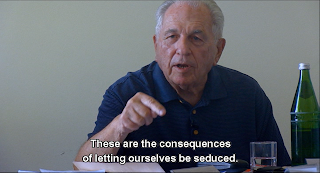 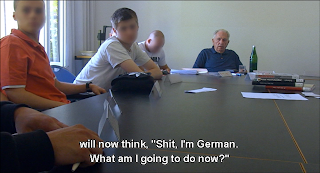 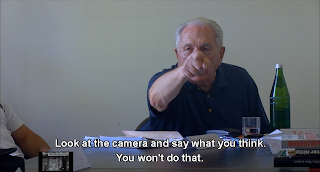 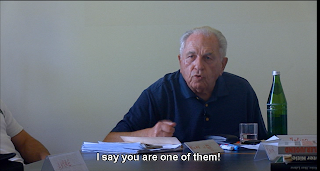 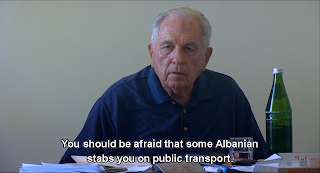 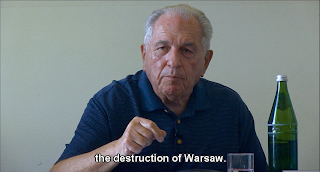 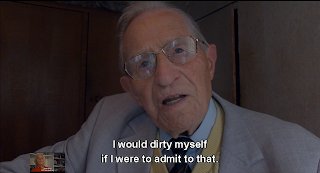 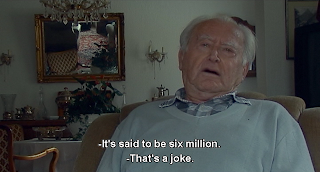 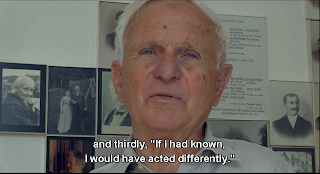 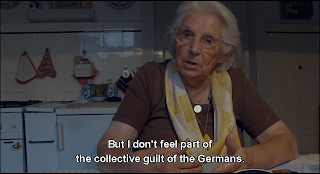 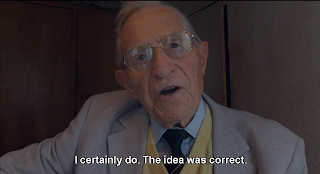 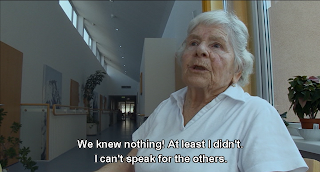 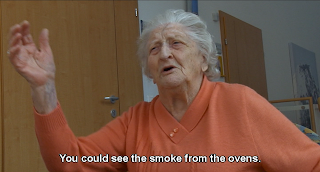 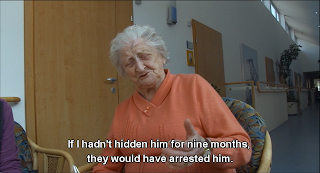