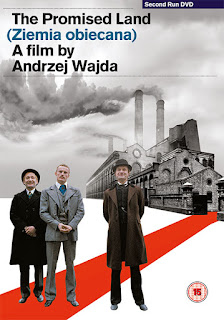 Andrzej Wajda March 6, 1926 – October 9, 2016. Filmmaker. Genius. Every Polonian and every lover of cinematic art owes him a debt of gratitude.

Below, my reviews of two of his films, The Promised Land and Katyn.

I don't have all day. So just the two reviews, below, which I hope you will read.

The Promised Land is a visual feast, fast-paced, and every bit as ruthless as the cutthroat characters it depicts. The topic – the Industrial Revolution, and the characters – immoral greedy monsters – are ugly and mean, but Wajda's filmmaking is so virtuosic you watch just for the sheer craft, splendor, and runaway train of a plot. I find it hard to sit through movies where there are no sympathetic main characters and no possibility of a happy ending, but The Promised Land is addictively watchable. There's an orgy, a tiger, several mutilated bodies, fires, riots, history, and Wojciech Kilar's driving, award-winning score.

Anyone interested in the Industrial Revolution should see this movie. Fans of Dickens' "Oliver Twist" and Gaskell's "North and South" really must see it. I wish I could require my students to watch it. Wajda was determined to get every detail correct. In the DVD's extra features, an assistant director discusses a scene of indigent paupers receiving charity food. Wajda's team discovered that the indigent were fed from long, metal tables with bowls built right into them. They rebuilt such a table just for this scene, lasting a few minutes. They had special wooden spoons made, and then weathered them by soaking them in oil. The paupers' rags were similarly weathered. There is a lengthy scene where Anna (Anna Nehrebecka), a country aristocrat, travels to the city. The camera follows Anna and lays out Lodz before her in all its gritty, noxious detail: smoking chimneys, workers' funerals, fighting men, the Jewish quarter. The scene looks like documentary footage of a late nineteenth-century industrial city.

The Promised Land also takes the viewer into the mansions of Lodz, almost ridiculous in their sumptuousness, plunked down in so much filth, squalor, and despair. Ornate winding staircases, gilt-encrusted columns and ceiling murals lure on industrialists willing to wring every last penny from their desperate employees.

The Promised Land depicts Lodz's emergence as a textile manufacturing hub. Three friends, one a Polish aristocrat, one a Jew, and one a German, strive to build their own factory. They have few resources and must do dirty things to make their dreams of unlimited wealth a reality. Blond Karol (Daniel Olbrychski) has the face of a cherub and the soul of a serial killer. His entire being is omnivorous greed. Moryc (Wojciech Pszoniak) cheats another Jew to get his stake. After doing so, he practically collapses from the strain, and then breaks the fourth wall, winking at the audience. He's just an actor playing a part, he reminds us, as they all are, playing any part they want to get their highest ideal: cash.

The film also depicts workers and their plight. A dewy young mill hand is lured into prostitution. Others are consumed by the machines they work. Scenes of mutilated flesh are quite graphic, and yet not sensationalistic. This is the price poor people pay for bread, the film shows us. The camera does not linger. It keeps moving. Just like Lodz, just like men chasing cash, just like history.

There are a few characters who aren't utterly despicable. They appear, make small squeaks of decency, self-respect, and dignity, and are crushed by the inevitable. There is a stunning scene that is quite different from anything else in the film. The film moves quickly and purposefully, but in this scene men meet in a small room to play classical music. The scene is not at all essential to the plot. It moves with atypical languor. The scene seems to say, "Yes, people in Lodz had souls." That reminder makes the surrounding greed-induced frenzy all the more disturbing.

Some viewers protest The Promised Land as an anti-Semitic film, because of unpleasant Jewish characters. Indeed, there are unpleasant Jewish characters in the film. Virtually *every* character in the film is unpleasant – even the pretty, innocent child lured into prostitution. The film does not allow you to pity her, but implies that she was complicit in her own downfall. Further, every character is unpleasant in an ethnically- gender-, and socioeconomic-class-coded way. That is, the Polish peasants are unpleasant in a stereotypical way associated with peasants, the one priest is unpleasant in a way associated with priests. The men are bad men, the women are bad women. The priest is onscreen for minutes only, but he leers at a pretty factory hand. Anna has a big heart, but she is ineffectual and not smart enough to see through Karol. Other women are whores or idiots. The Polish aristocrat aggressively sells out every high ideal his ancestors held dear. He desecrates an image of Poland's icon, the Black Madonna of Czestochowa. The Germans are either sadistic and autocratic or lumpen and dull. The Polish peasant who manages to rise above his station is an insufferable, loud-mouthed boor. This film isn't anti-Semitic; it is brutally misanthropic. It depicts people at their worst.

Again, it is Wajda's virtuosic filmmaking that makes all this endurable. At a key moment, a rock flies through a window. That rock means much – the inevitable march of history that has brought industrialists high and might also bring them very, very low. Any other filmmaker would probably have handled the rock through a window as a crashing sound followed by a thud. Wajda films this scene with such skill and poetry that the rock becomes a character in the film. It demands, and gets, the viewer's full attention. Subsequent action is filmed *from the rock's point of view.* Poland is a small, distant, and much contested country. It's filmmaking like that that amply earned Wajda his honorary Academy Award. 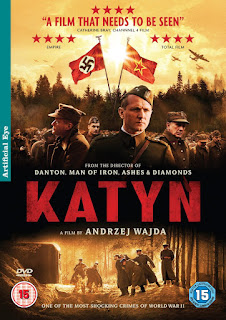 I watched Katyn on a home computer screen. Even in that limited format, Katyn had an impact on me comparable to such cinematic greats as "Lawrence of Arabia." I cried throughout most of the film. I resolved that many of my relationships would be different. I remembered people I had known who reminded me of characters in the movie. After the film ended, I felt that I could not listen to the radio or read the newspaper or listen to anyone speak. I just needed to allow the film to sink into me.

Naysayers have critiqued Katyn as boring and dull. If you need a film to depict war, occupation, and atrocity as shiny, compact, and compelling as a sports car, then you should listen to those naysayers; don't watch "Katyn," rather, watch the very silly, teen fanboy-friendly Quentin Tarantino flic, "Inglorious Bastards." If you've seen enough Hollywood productions jam-packed with sexy Nazis and happy endings, and you want to take in a film that dares to depict, in eyeblinks, what war, atrocity, and occupation looked like and felt like to real people, then by all means see "Katyn." One of the many features that I admired: Katyn's Nazis are not sexy. They are not Tom Cruise, Liam Neeson, Christoph Waltz. Katyn's Nazis are brutal, repugnant thugs.

I respect this movie. There are too few movies about which I'd say that. It shows the courage not to attempt to weave an uplifting, feel-good atrocity narrative that leaves the viewer with a smile. This isn't "Schindler's List." "Schindler's List" is a very good movie, but this isn't that. It is, rather, very much like what World War Two and the subsequent Soviet occupation sounded like to me when I listened to my own older friends and relatives, who lived through both. This is disjointed narrative, stories that seem headed for redemption or even ecstasy but that end in random death, that end in aborted normalcy, aborted joy, aborted meaning. I felt, in watching these cold, pale, stoic characters, as if I were, once again, sitting across the table from older Eastern European friends and relatives. Yes, that's what they looked like. Yes, those are the facial expressions they assumed when they talked about the uncle who was rounded up and never heard from again, the daring, handsome lad who ended up in a mass grave – or when they pointedly did *not* talk about these people. The gravestone whose inscription dares to tell the truth; the tearing down of a propaganda poster; the Red Army soldier who struggles to do the right thing by a widow, who won't yet admit that she is a widow; the singing of exactly the right Christmas carol at exactly the right moment: those are exactly the heroic gestures that no one ever saw, that went unrecorded, that only one person lived to tell about, to tell me. Here they are, onscreen.

When a movie is named Katyn the viewer knows how it will end; it's kind of like a movie named "Auschwitz" or "Kolyma" or "Wounded Knee." There isn't going to be a surprise ending. I was still surprised by the ending, by how courageous and moving I found it. Once again, Andrzej Wajda managed to wow the filmgoer in me. And he managed to move the human in me.

See "Katyn." See a movie you can respect, a movie that is worth your time.