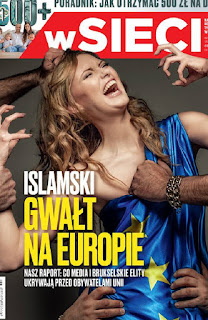 The men used the tactic of "taharrush gamea." A group of men surround a lone woman, violently grope her, perhaps rape her, rob her, and also perhaps burn her with lighted fireworks. They then move on to the next victim.

This tactic had previously been used in Tahrir Square, notably on Lara Logan. There have been documented attacks on hundreds of less famous women as well in Tahrir Square, including an Egyptian who was later visited in the hospital by Egyptian President Abdel Fattah el-Sisi.

Muslim men targeting kuffar women for sexual assault is nothing new. It goes back to Mohammed himself, who engaged in such assaults and advised his followers to do so. See here.

Politicians' and journalists' attempt to suppress information about the mass sex assaults is part of a larger pattern. In Rotherham, England, Muslim men formed rape gangs that preyed on young English girls. Authorities knew of these assaults but kept quiet because they were afraid of being called racist and politically incorrect. You can read more about that here. Swedish police have also been accused of covering up sex assaults against women and girls by Muslims. You can read more about that here.

Thanks to the invention of social media, politicians and journalists were not successful in their attempts to suppress information about the New Year's sex assaults. Politicians and journalists worked very hard to spin the story once it got out. Women could just respond by maintaining an arm's length distance between themselves and potential attackers. Migrants could be politely requested not to engage in gang rape.

The Polish magazine w Sieci responded with a February 18 cover that depicts a woman attempting to hide behind a European Union flag. Male hands grab at her and her flag.

I posted the image on my Facebook page. A Facebook friend immediately said it was similar to work appearing in the Nazi propaganda publication Der Sturmer.

I see no similarity between this image and Nazi art. I find it troubling that anyone automatically and without any support makes the connection between a Polish magazine and Nazi art. Do we really have to repeat that Nazism was a German phenomenon, that Poland was attacked by and fought against Nazis?

The w Sieci image brings to mind, for me, Kara Walker's art. Kara Walker creates black-and-white silhouettes that dramatize the horrors of slavery, including rape. In her work, she makes it inescapable that white men used slavery to rape black women. Her art is highly praised.

Clearly there's a double standard at work. Clearly critics have a problem with the w Sieci cover because PC says it is not okay to criticize Islam. The women victims are expendable on the altar of political correctness.

Perhaps people who find the w Sieci cover too disturbing to view might prefer this video that shows the Egyptian police brutally beating an Egyptian girl. She's known as the girl in the blue bra. The police strip her and stomp on her breasts, barely covered by a blue bra.

What is wrong with people who find the w Sieci cover offensive, but who don't find the mass rape of women offensive?

There's a double standard at work.

In politically correct discourse, one can say any negative thing one wants about Western Civilization, about bad, bad, evil white men, about Christianity and, in certain contexts, about Israel or Judaism.

But you dare not breathe one negative word about Islam.

Recently I was conversing with someone who wishes to remain anonymous. I honor this person's request.

There is nothing "ethnocentric" about ethics. Ayaan Hirsi Ali and Leyla Hussein are just two of the women who come from cultures that practice FGM, who have had FGM performed on them, and who work against FGM.

Further, this student was brainwashed by this professor. FGM *is* related to Islam. It is *not* an "African custom." A map of the prevalence of FGM shows that it occurs where Muslims live, including in Indonesia, an East Asian nation. See here. Islamic teaching and law support it. See here.

I am sympathetic to Muslims who don't want to be hated and who feel uncomfortable when their religion is criticized. I am Catholic and I have confronted anti-Catholic hatred all my life. It's a daily event on Facebook. I have friends who hate my faith and post virulently anti-Catholic memes.

Recently Pope Francis, in reference to US presidential candidate Donald Trump, said that a man who speaks of building walls, not bridges, is not Christian.

Protestants responded. A Protestant blogger responded to Scalia's death by announcing that Scalia, along with Mother Teresa, was almost certainly in Hell. Susan DeLemus, a New Hampshire legislator, called Pope Francis the anti-Christ. "The founders of the United States actually, the Protestant Church – their commentary references the papacy as the anti-Christ."

That Catholics are doomed to Hell and that we are the anti-Christ are standard-issue talking points of Protestant anti-Catholic rhetoric.

I respond to the haters I encounter with words. In addition, all Christians must constantly examine their behavior and change when change is called for.


Muslims who don't like to see Islam criticized will benefit from reforming their community. Start with these gentlemen.